Don't Look Now: The Digital Ad Economy Is Heading For a Correction

Traditional Advertising Just Doesn't Translate to Mobile. And That's a Problem
READ THIS NEXT
You Can't Stop Instagram Bots by Looking. Brands Have to Stop Buying Them

It's been "the year of mobile" since 2008. But you could make a pretty good case for 2014. After all, by the end of 2013, more people spent more time connected to the Internet through mobile devices than on laptops and desktops combined. And as mobile device sales plateau (a sign of market saturation) and laptop and desktop sales shrink, the gap will only widen.

Mobile has not only become the primary way that people are accessing the Internet, but the primary way they are using social media. It's also the only media usage that is still growing. Ask any publisher – their mobile traffic is rapidly heading towards eclipsing 50% of their overall traffic.

And therein lies the problem.

Michael Wolff recently opined that the evolution of TV is resulting in fewer people watching fewer ads. But the evolution of mobile (the medium poised to eclipse TV in the not-too-distant future) may be an even bigger issue.

'Unnatural' ads
The classic application of advertising within mobile content and apps is fairly unnatural. Social media usage has dominated the smaller, vertically oriented screens of mobile devices, so what people are actually consuming is inherently different. We used to find ourselves reading magazines; watching TV shows; browsing websites, all to discover content that was relevant to us, as chosen by professionals. But times have changed. More often than ever, we discover content through our connections via feeds; not websites.

The mobile ad economy today is driven by ads getting you to install apps on your phone. Attempts to take the classic display ad format, the banner ad, and repurpose it as a branding solution on mobile devices have just not panned out. On a smaller screen, it's got a too small of a footprint, too many mistaken clicks from humans, and too many real clicks from bots to be rendered effective. Heck, even on the desktop web, upwards of 30% of impressions are fraudulent.

Yet on the desktop web, nearly all brands' dollars meant to build awareness and preference are spent on display ads and video impressions. So with consumers' transition to mobile, where will the brand dollars go?

While the ad industry continues to preserve the way things have always been done, it is woefully unprepared for what's next, or more accurately, what's happening right now — consumers' shift to a consumption pattern without a clear, standardized brand advertising opportunity or format that can scale.

This raises many questions. Can advertising evolve to a feed and app dominated mobile world? Should it? Will the advertising economy contract along with available inventory and response rates? Will that leave us with fewer publishers and producers with less revenue? Video seems to be the ad format that will lose the least from the transition from desktop to mobile; it just translates most literally. And sure, people are watching a lot of video on their mobile devices, but what about everything else?

Hello, correction
However mobile brand advertising matures, the inventory and revenue gap is becoming more and more obvious. Without a solution, the digital ad economy is headed for a correction that will leave fewer players controlling more of the marketplace, and the rest a completely fragmented ad format landscape with no standardized formats.

We can choose to look the other way and blindly try to preserve the status quo. Or, we can accept the fact that the advertising economy is heading for a disaster of biblical proportions. Old Testament, real wrath-of-God type stuff. Fire and brimstone coming down from the sky. Rivers and seas boiling. Forty years of darkness. Earthquakes. Volcanoes. The dead rising from the grave. Human sacrifice. Doges and Grumpy Cats, living together. Mass hysteria.

Or we can do something about it.

Once we have accepted that advertising needs to undergo a transformation to adapt to a mobile world, we can begin to change the outcome by answering the call to reinvent it.

Starting anew may mean doing more with less. Fewer ads. Less standardization. Smaller devices. Perhaps that's what we need to accept as the future of the advertising economy for us to actually move forward, and build an even healthier one. 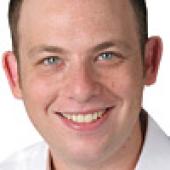