Marketers: Don't Let Your Digital Ads be Like 'Groundhog Day'

Running the Same Ads Over and Over Just Won't Cut It
READ THIS NEXT
You Can't Stop Instagram Bots by Looking. Brands Have to Stop Buying Them

Happy Groundhog Day. Later today, the famous groundhog "Punxsutawney Phil" will tell Pennsylvania citizens whether spring is coming early, or if they are in for six more weeks of winter.

The classic 1993 Bill Murray film "Groundhog Day" made this quirky event world famous. The plot sees Murray's character, grumpy weatherman Phil Connors, experience the same day -- February 2 -- over and over again, in a neverending nightmare. No matter what he does -- driving down railroad tracks into an oncoming train, jumping off a high building -- he wakes up to the same Sonny & Cher song "I Got You Babe" day after day.

Groundhog Day reminds me of one of the biggest challenges faced by the digital ad industry today: an audience blinded to ads by overexposure to the same story over and over again. Estimates put the number of brand messages the average American consumer receives per day somewhere between 500 and 1,500. How do we help advertisers avoid getting stuck on repeat?

Anyone who has worked in the industry knows that the best way for advertisers to recapture the attention of their target audience is through engaging storytelling. People feel empathy, are touched personally and engage because a story unfolds.

Let's briefly return to Bill Murray's character. Like Phil, consumers get bored, then grumpy and disillusioned when they view the same ads over and over again across different platforms. And guess what? They switch off. Call it "ad blindness," call it "adpathy," it doesn't matter. The bottom line is, you don't want to be in the category of brands instigating the "Groundhog Day" experience for consumers.

With more than a third of U.S. consumers now owning one of each mobile device -- a smart phone, laptop and tablet -- it's easy to see how they are quickly becoming disillusioned by the repetitiveness of our brand messages. To keep the attention of our desired audiences across their devices, multi-platform advertising must go even further than it has today. It is only by building up a 360-degree view of a consumer across every platform and understanding them deeply -- their motivations, their habits and their interests -- through respectful, transparent analysis of their data that it is possible to tell a story that is relevant, contextual and engaging. The next wave of multi-screen, multi-platform solutions will make it easier for marketers to tell their story -- at the right time -- based on audience mindset.

Without wishing to underestimate "Groundhog Day"'s director Harold Ramis, I would be very surprised if he intended the film to be a satirical take on the future of digital advertising (especially since the first banner ad didn't appear until the following year). But watched retrospectively, it's certainly a poignant reminder of the danger inherent in a neverending circle of repetition. 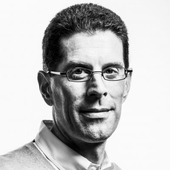 Greg Nelson
Greg Nelson is the general manager of display advertising at Microsoft Corp.
View all articles by this author