Super Bowl Shuffle: Why Marketers Will Shift to 'Platforms'

Brands That Continually Throw to Consumers Will Win Come Monday Morning and Beyond
Garrick Schmitt
Credit:
The teams playing in this year's Super Bowl have already been decided, but the Super Bowl shuffle for advertisers began in earnest last month when marketing mainstays like FedEx, General Motors and Pepsi made news by announcing they were opting out of this year's ad extravaganza.

But for those looking to gauge the health of the ad industry, Super Bowl advertising is a bit of red herring. CBS is charging about $2.5 million for 30 seconds of commercial time -- and rightly so. Rarely do you get so many Americans watching one event and actually enjoying the advertising. It's a tremendous opportunity for most brand marketers and we'd be foolish to look at this year's Super Bowl as proof of either the rejuvenation of the 30-second spot or the rejection of it.

That doesn't mean some won't try. After all, last year Hulu saw a 50% increase in site traffic after running ads during the Super Bowl and Denny's traffic to its website soared nearly 1,700% as consumers sought information about its free breakfast promotion.

There certainly will be advertising winners (and losers) on Super Bowl Sunday but let's hope that the Monday morning quarterback chatter doesn't obscure the larger shift at hand for marketers this year. 2010 will be the year of the "platform" for advertisers.

Unlike a website, banner, Facebook application or 30-second spot, a platform is an always-on digital environment that allows brands to run specific or multiple programs. The goal is to meaningfully engage consumers on multiple levels. For some brands, that means creating an immersive experience with integrated commerce. For others, it means enabling consumers to connect with each other in valuable, unexpected ways.

But for marketers, the real winners this year will be the brands who have built these platforms to engage consumers well after this year's Super Bowl becomes a distant memory -- there are another 364 days to worry about after all. Here's a look at some of the more interesting platforms in play today: 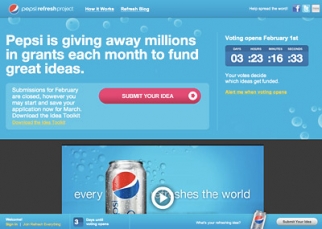 Pepsi's Refresh Everything
Community Action Platforms: Perhaps the biggest, and most noteworthy, push into this space comes from PepsiCo, which opted to sit out the Super Bowl to tout it's cause-marketing program Refresh Everything. The platform, which is inspired by crowdsourced ventures like Kickstarter, enables Pepsi to award grant money to consumers who suggest various ideas and iniatives for their communities. The effort is akin to other cause-marketing efforts like Procter & Gamble's Tide: Loads of Hope, where consumers purchase T-shirts, among other things, to fund Tide's effort to help families stricken by disaster with basic laundry services. 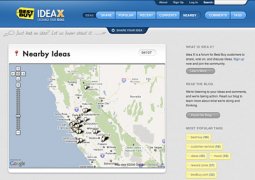 Best Buy's Ideax
Crowdsourcing Platforms: While not exactly new, enough brands are finding success using crowdsourcing platforms to generate insight and drive deeper consumer participation that we will surely see more this year. Starbuck's MyStarbucksIdea.com is clearly the outsized success here with tens of thousands of ideas collected and a vibrant community. Dell's Idea Storm falls into this category, as does Lego's Mindstorm. The most recent entrant is Best Buy's Ideax, which shares similar elements of the category but goes somewhat further by allowing users to search/browse by ideas generated "Nearby." The community here is both virtual and local. 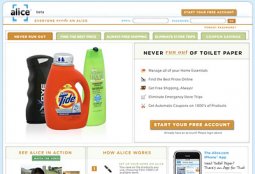 Alice.com
Commerce Platforms: As more marketers move toward a platform model, clearly one of the benefits is allowing consumers to have a direct relationship with the brand that's not dependent on an existing network like Facebook or Yahoo! or a publisher like the New York Times. A natural outcome is that more and more brands will want to sell direct to consumers. Procter & Gamble announced that it will go direct to consumers this month (challenging Amazon and Walmart online) with an "eStore." Similarly, General Mills and a host of other CPG marketers are moving onto Alice.com, which is enabling direct e-commerce for heavy hitters like General Mills and Johnson & Johnson. Other more CPG-oriented players like Mattel are making similar moves, it recently launched its own e-commerce store too. 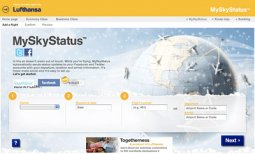 Lufthansa's MySkyStatus
Brand Experience Platforms: Experiential platforms come in many different shapes and sizes. Nike has shifted its marketing dollars to better support athletes through programs like Nike Plus and selling direct to consumers via its estore. Best Buy is building credibility in the music-instrument category by offering up expert guidance and videos. But some of the most interesting efforts of late find brands using either making a connection directly with consumers via tactics like blogs or providing functionality that better connects consumers to their peers. Lufthansa's MySkyStatus automatically sends flight updates to your peers via Twitter, Facebook and e-mail. Similarly, JetBlue allows consumers to vote on actual plane designs through its Jet Blue Tails program and Southwest Airlines uses Nuts About Southwest as a social hub for its dedicated customers. Similarly, Whole Foods uses its Whole Story to speak to consumers directly about its brand, food recipes as well as an aggregation point for its social presence on Flickr, Facebook and Twitter. 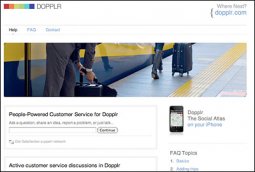 Dopplr
Social CRM Platforms: Both the most nascent and promising area for brands this year is in the emerging space of social CRM platforms, where customers rather than just company employees, provide support. Best Buy has made the most visible move here with Twelpforce. Consumers are encouraged to simply tweet tech-related questions to @Twelpforce for support from hundreds of its "Blue Shirts." Another interesting player here is GetSatisfaction, which powers companies like Dopplr, Mint.com, Nike and Microsoft among others. GetSatisfaction builds customer support communities that connects customers with their peers and a brand's employees for help. Integration with Salesforce.com's AppExchange bodes for bigger thing ahead.

These are just a few examples of the kinds of platform moves brand marketers will make in 2010. There will certainly be more -- especially with the rise in mobile and emerging technologies such as "touch" and augmented reality. The big question, however, will be whether brand marketers look to extend or "distribute" across existing social and experiential platforms such as Facebook, Twitter, YouTube and their ilk, or will they create their own platforms? The smart money should be on both. It's one thing to "fish where the fish are" but quite another to create experiences that will sustain consumers once the hubbub of Super Bowl Sunday has faded way. Creating an always-on platform for consumers is a winning play for the Monday morning after.

Garrick Schmitt
View all articles by this author