The Era of Creative Empowerment

Data Drives Engagement Success and Creative Relevance
Conor Brady
Credit:
During the recent holiday season I had the opportunity to take a step back and read some of the comments stemming from my maiden DigitalNext blog column titled, "Creatives: Are You OK With Collaboration, Measurement and Failure?" It was a very interesting exercise.

What I found is that the article sparked reaction from two camps, with the more negative wave of comments coming from traditional agencies. Most of the comments didn't come as a surprise. That being said, what really did surprise me is this attitude that looking at additional insights -- such as analytics and data -- about your target audience in some way stifles your "creative juices" or transforms you into some sort of impaired creative.

What I must point out here is that at no point is anyone claiming that looking and analyzing data is becoming the "idea." That could not be farther from the case. The practice of analyzing data actually becomes another source of intelligence that will hopefully make creatives better and more strategic.

Just think about it.

None of us need data to tell us an idea is rubbish. We're talking about the exercise of compiling research, which then provides us with the necessary assurances we're in the same ballpark as the consumer. After all, none of us can rightly say here and now that we know everything we need to know about every demographic and how they are evolving. Trust me, I wish I could, as it would save us all a great deal of time and money. The ability to compile an instant audience snapshot is really what I need.

The reality is that we no longer work in a world where we commence campaigns with TV, then roll out some print, sprinkle in a dash of radio and, oh yeah, before I forget, launch some banner ads. And my answer to that is a resounding "Thank god!" That formula lost any chance of inspiration for me a long time ago. What does inspire me is actually trying to figure what, where and when might be the right place to make a connection, one that goes beyond the "they saw it" model (which in today's world should most aptly be called the "they skipped it" model).

Of course I could do this by gut, or put a finger in the air to see which way the wind is blowing. Instinct and gut is one way to go. But give me the intelligence that says this is where that consumer is, and this is what they are passionate about and I will put all my of instinct and creative energies into that.

I think what is lost here is the fact that the creative processes we use to get to the idea have actually gone virtually unchanged. The difference is in your attitude and willingness to be open to inputs that may help you get to that final idea. I truly believe that the days of having your creative team locked in a room for 15 hours followed by the grand unveiling of the campaign are over. At least they are for me. I find working with other people an inspiration, not a hindrance. Their input challenges me and makes my thinking better. I also find that looking at as much back ground as possible is an informative process that ultimately delivers clients the results they want. While the entire process makes me feel like I've come a long way since putting type on record covers, I think I have evolved as a creative along the way. 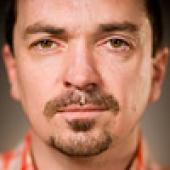