The Future of Geo-tagged Marketing, Now

The Location Equation: How a New Breed of Services Like Foursquare, SimpleGeo Are Changing Mobile
Garrick Schmitt
Credit:
Just a few short years ago, if you had asked most marketers about the future of mobile, their nirvana most likely would have been a consumer strolling down the aisle of her local grocery store receiving text messages offering 50 cents off a bottle of ketchup or jar of peanut butter.

But not so much today, as industry heavyweights and upstarts like Google, Facebook, Twitter and SimpleGeo are racing to map out a digital, geo-tagged future where our physical and virtual worlds will increasingly collide. Soon a simple coupon delivered via SMS or Bluetooth will seem like an idea from a different era, like Pong or the Hula Hoop.

Everyone, it seems, is looking to take advantage of the demand for location-based services created by GPS-enabled devices, such as Apple's iPhone and Google's Android 2.0. Even desktop operating systems, such as Windows 7 and Mac OS X Snow Leopard will soon contain location-awareness features -- so too will browsers, as we've seen with the latest Firefox releases. 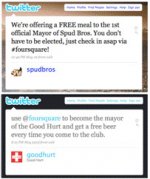 Foursquare
Now come the services. Just this week, Google launched What's Nearby, a location-based search that's part of Google Maps on Android and will soon be more widely available. The service allows consumers to simply access a list of the ten closest places of interest near their physical location via their mobiles.

But geo-location APIs and GPS-enabled mobile devices are just part of the "location equation." Here's a look at the most promising geo players who are making location-based marketing a reality for brands today.

FOURSQUARE AND GOWALLA: Foursquare and Gowalla are the two most buzzed-about leaders in location-based services. Both companies provide game-like experiences for their users that allow them to "check-in" at various locales (bars, restaurants, etc.). But it's Foursquare that has recently made the first play for advertisers. The company recently debuted its Foursquare for Business program, which enables retailers to provide offers to their users and track the success of location-based campaigns. Industry analysts are understandably enthused.

YELP: Yelp is another major player in the location-based advertising category. The company has made a graceful leap from the desktop to the hip pocket with an iPhone app that offers suggestions -- and, more tellingly, special sales and offers -- to users, based on GPS coordinates. Going one step further, the company recently launched its augmented-reality application for the iPhone, dubbed "Monocle," which allows users to look through the phone's camera to see an overlay of local business information for wherever they may be standing.

STARBUCKS: Starbucks is proving that brands too can enter the location-based services fray. The company's myStarbucks iPhone application allows one to broadcast which Starbucks location he or she is at via Facebook or Twitter. Couple that with a store locator that allows users to choose a location based on wifi availability, hot food items and more, and Starbucks has a potent offering for a mobile consumer base. It's not hard to imagine a near future where Starbucks will soon react to user volume and location data by pushing offers to caffeine-craving consumers to encourage rapid coffee consumption at off-peak hours. 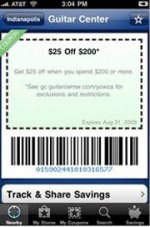 Yowza
YOWZA: Yowza is one of the more interesting upstarts in location-based advertising. Users who download the Yowza app to their iPhones are able to have deals and coupons pushed to them based on their immediate location. Yowza is paperless too -- simply let the cashier scan your phone to receive a discount. With big-name retailers like REI, Crate & Barrel, Guitar Center and CB2 on board, Yowza has the potential to completely upend the Sunday circular.

YIPIT: Though still in its infancy, Foursquare has opened up its API to create a burgeoning -- if still fledgling -- location-based ecosystem. Yipit is one of the most interesting service providers for marketers. The startup scours sample sales, restaurant deals, newspapers and much more to surface nearby sales and deals to users based on their Foursquare "check-ins," and it predicts which offers users are most interested in based on their profile preferences. It's NY only, for now.

SIMPLEGEO: As location-based services take off, a host of new companies like GeoApi, Geodelic, and, most promisingly, SimpleGeo are offering geo services to make application development for publishers and brands much simpler. SimpleGeo offers hosted services like a Context Engine that allows developers to access geo-tagged content from the likes of Twitter, Flickr, Brightkite and more; storage for location data; and even an SDKs so you can get augmented reality up and running, fast.

Of course, location-based services won't be all smooth sailing. It's still early days for geolocation, and privacy issues will certainly come to the fore sooner rather than later. But forward-thinking brands would do well to take note. It won't be much longer until digital experiences -- whether mobile or desktop-based -- start reacting to users based on their coordinates. The co-mingling of social media and physical location information is potent stuff, as Foursquare has proven. And just think, Facebook hasn't even officially entered the arena, yet.

Garrick Schmitt
View all articles by this author