Digital Marketing: The Golden Rules of the Web

A Few Lessons to Live by in 2009
READ THIS NEXT
You Can't Stop Instagram Bots by Looking. Brands Have to Stop Buying Them
Faris Yakob
Credit:

Aphorisms, or proverbs, are the oldest class of successful ideas in the world.

The oldest, and most successful, is the Golden Rule, or the principle of reciprocity, which underlies all major world religions in almost exactly the same form: Treat others as you would like to be treated.

These nuggets of wisdom transcend centuries and cultures. Versions of the proverb "where there's smoke there's fire" have appeared in more than 55 different languages.

These expressions are complex ideas that can guide behavior. So here we offer nine aphorisms for digital communication this year. While they may not stay with you as long as the Golden Rule, you might still remember a couple in a month or two.

Attention is like friendship: It can't be bought, only earned.

There's nothing new in the idea of branded utility, I hear you cry -- and that's true. But it's only going to get more important and, frankly, it hasn't really been done very well so far. Name one good example apart from Nike -- I dare you. Anyway, let's build on it. This year is all about being useful for where you are: geotility. Watch every brand build iPhone applications this year. But only some will actually be useful and, therefore, used.

Let's all agree to stop using the word viral. It's an unhelpful metaphor that is confusing us. Viral is a thing that happens, not a thing that is. There is no such thing as "a viral." The metaphor suggests something is self-propagating, when what we actually mean is that lots of people are choosing to spread it around, for their own reasons. Focusing on what those reasons are is going to be a lot more helpful.

Recombinant culture is part of digital culture, normalized by cut and paste. What's more, the more something is remixed, the more it will spread -- when you put part of yourself into something, you want people to see it. The remixes of Cadbury's Gorilla ad have helped it become the most watched ad online ever. So don't worry about people saying the wrong thing; let them, nay, encourage them to remix everything.

We are all connected -- and now in a way that we can see. That means thinking about individuals in isolation gets less and less helpful: throw out your pen portraits and think about the networks and their effects. Additionally, this year people are going to need help. Brands that understand that they are connected will harness goodwill and the flattening of the world to facilitate collective action. Google's Project 10 to the 100th and the Amex Members project both put brand money behind our collective desire to help as many people as possible.

Be nice or leave

Social media is only going to get more important. This isn't going to go away and it is going to affect your business, whatever you do. The grammar of social media is different from the grammar of commercial media. The rules of behavior, the motivations, the etiquette are all social. So learn to be nice or leave. Stop thinking like a company and act like a person.

Everywhere you go, always take your friends with you

Data portability is the idea that you should be able to take your identity with you wherever you go online. Facebook Connect, Google Friend Connect and OpenID are all vying to be the standard "identity" that you use to log in to other websites. Whoever comes out top, you will be able to take your friends with you wherever you go online. Equally, advertising units might be able to tell you if your friend has clicked on the link, or bought the product in question. When CNN and Facebook Connect joined forces to stream the inauguration, old and new media collided, which leads us to ...

Media has always been social. Not just in the sense that it is literally a way to connect people, but also because media has a strong tendency to act as a solidarity good -- that is, the more people consume it the more valuable it gets. People like talking about ideas. So, increasingly, previously "unsocial" media is going to get socialized. TV shows like "The Hills" and "Eureka" have set up back-channels on Twitter for viewers to discuss the shows in real time.

The world is drowning in data. Digital interactions on every platform create vast swathes of numbers -- and we need new ways of seeing to make any sense of them. Artists like Jonathan Harris and design group Stamen have broken new ground in the aggregation and display of data from the web. Brands like Fiat are using the same technology to show you how to drive more efficiently. We are going to be seeing many, many more visualizations this year.

Augment your Reality Remember when virtual reality was the newest "new thing" and we all strapped those helmets on and explored those oddly empty cubist spaces? Augmented reality is different -- it uses the world as you see it as the base and builds on it, tagging data to real-world places and objects that can be read by computers or mobile phones. Expect to see lots more brand augmentation this year, as webcams show us 3D models that appear out of pictures on a page, as Lego and Mini have both recently done.

~ ~ ~
Faris Yakob is exec VP-chief technology strategist at McCann Erickson, New York. Prior to that he was digital ninja at Naked, New York. Read more of his thoughts at his blog, Talent Imitates, Genius Steals or at @faris. 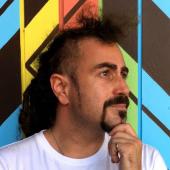 Faris Yakob
Faris Yakob is the co-founder of innovation and strategy consultancy Genius Steals and is the author of "Paid Attention: Innovative Advertising for a Digital World" [published by Kogan Page].
Follow View all articles by this author