Has Second Life Cut Its Mullet?

Two Years Later, I Venture Back Into the World We All Forgot
READ THIS NEXT
You Can't Stop Instagram Bots by Looking. Brands Have to Stop Buying Them

At the end of June I wrote a simple blog post for DigitalNext addressing why I believe the hype currently associated with Twitter will be more sustainable than Second Life's. Long-story short, "Twitter is light, cheap, open and permanent, whereas Second Life is heavy, expensive, closed and ephemeral." 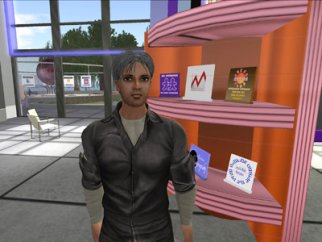 Twenty-one comments and a series of responses later, I was invited by Second Life to return to the virtual world that I stopped visiting back in 2007. My complaint, and why I never returned, is that the client, called the viewer in SL parlance, was too resource intensive, incompatible with my executive laptop (which favored lightweight and slimness over horsepower and graphics cards) and required too much bandwidth, preferably a LAN connection instead of Wi-Fi.

Well, after visiting a few times, I can report nothing has changed in terms of the resource-intensity, but this post is not going to be about the barriers to entry but rather what one finds once inside Second Life's walled garden.

The reason I was salty about Second Life when I first arrived had little to do with my hardware, software or connection, but rather the experience I had when I arrived. I looked like I dork -- a n00b. I didn't have any friends on Second Life and didn't know how to find any. I may be the king of the geeks but many of my friends are Luddites. I was lonely and I didn't get it. When it comes to tech and community, it often comes down to getting it.

Back in the day, I did have an incentive to visit Second Life. My client, Crayon, has an island there. Every week they would have "coffee with Crayon" and we would stand there in all of our avatar-iness and type at each other while making gestures and I didn't see why Inter-Relay Chat (IRC) wasn't a better solution if I had to type my responses, anyway.

Since my June post, Doug Thompson, a.k.a. Dusan Writer when he's in-world, of Canadian firm Remedy Limited, reached out to offer me a tour of Second Life through his seasoned, passionate and professional eyes. In-world, I am called Chris Ebi and Dusan showed me around a pretty fantastic and beautiful place resplendent with Eames and Barcelona chairs, giant JumboTrons and fashionable rock stars sporting beauty and couth. What Dusan wanted to show me was that Second Life has grown up a lot since its inception.

When I met Dusan in Second Life, he teleported me to someplace called Immersive Workspaces, which focused on highlighting some of the most cutting-edge innovations. He introduced me to Jon Brouchoud, inventor of something called Wikitecture, which, to my mind, allows laypeople, interior designers, developers and architects to collaborate on virtual spaces as they might relate to the real-world building of a clinic in Nepal, one of the examples he cited and demonstrated. The experience of Wikitecture and Immersive Workspaces reminded me of the scene in "The Matrix" when Neo and Trinity enter the Loading Construct, a white room that the operators of the various ships use to program items for crew members about to enter the Matrix. In that version, they ask their operator/programmer, Tank, for "Guns, lots of guns." At Tank's command, endless shelves of all sorts of firearms ranging from uzis to pistols are spawned in the loading construct. Out scroll an infinite number and variety of weapons, delivered via an infinite number of racks. Well Second Life was sort of like that, but instead of Glocks and M4s, there were ideas, innovations and architecture.

Then Dusan took me on a tour of eye candy. In many ways, Second Life can be explored as a postmodern museum where some of the art is better than others. One exceptional artist is Bryn Oh's Immersiva, a very bizarre series of work that feels like it is very Steampunk, as if I were even cool enough to know what Steampunk is!

Finally, during our exploration, we took a walk along a broad, meandering path. Dusan Writer/ Doug Thompson (who knows what "real" is any more) told me that Second Life was an amazing platform for raising money for charity. This meandering virtual path represented a relay race to raise money for the Cancer Society, called the Relay for Life, during which time real people can presumably run their avatars around and around these meandering boulevards while depositing Linden Dollars into coffers at the site of the road, all of which are used for cancer research. (And all without breaking a sweat.) He noted that because the planning, serving, hosting, walking and fund-raising are done entirely online -- and as most of which is done inside the virtual world of Second Life -- it is an excellent tool for bonding as a community in exactly the same meaningful way they're used in the "real" world. 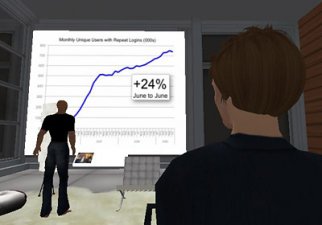 Linden Lab CEO Mark Kingdon shows off Second Life stats.
On Sept. 30 I will be interviewed live in Second Life by the gang from Metanomics at noon Pacific time -- be sure to check me out. Time will tell if I take to Second Life, but I've received a serious love-bombing. In my pre-interview, my pathetic N00b avatar even received hair and makeup, thanks to JenzZa Misfit (@JenzZa).

Even today I still get all sorts of comments about flying penises and furry sex every time I mention Second Life to advertising executives. Dusan reassured me that things were rather different and that far from flaming out after the hype faded, Second Life took the revenue and the momentum granted it by the land rush and has innovated, innovated, innovated.

One of the most exciting things I noticed when I logged in to Second Life is that it supports the most intriguing VoIP innovation. Not only does Second Life allow you to voice chat but it also supports true surround sound, allowing one to track where people are based depending on where their voice is coming from. When someone's close by, his or her voice is loud and clear. When the person walks away, the voice diminishes. And when they circle around you, voices shift from ear to ear, representing physical placement -- location awareness. This is really cool and offers a more cinematic experience that truly separates Second Life from simply being a very resource-intensive IRC.

Second Life has always been rocking the mullet -- business up front and party in the back -- but now, it seems, according to Linden Labs CEO Mark Kingdon, it's growing up and has visited the barber.

All of this renovation and motivation and passion is, apparently, aimed to woo companies back into Second Life, and here's why: Now that broadband, advanced processors and headsets are commonplace, it is now feasible to choose Second Life as a much more pleasant and inviting place to host your meetings and conference calls, especially in a world rife with swine flu and chopped travel budgets. You can easily set up an office space or a conference room and all meet up in-world, together, to engage in negotiations and collaboration. What's more, thanks to something like SkypeIn and SkypeOut, you'll soon be able to loop in all the folks who can't make it to SL through a telephone-to-Second Life number. And soon, denizens of Second Life will be able to send and receive SMS text messages via their in-world cell phone to their friends who are outsiders, according to Linden Labs' Kingdom.

What would I do to improve the Second Life experience for newbies? Well, I would recommend Second Life does with newcomers that my church does: make sure there are plenty of experienced greeters to welcome new Second Lifers who arrive as though fresh from the womb. There is no such thing as a killer app, so it is essential to select folks who can act as online facilitators, online community managers, etc. -- a sort of Second Life big brother or big sister to offer their help. I know that would have helped me, if someone took the time to help me get a better wardrobe, understand real estate and the scripting and buying and selling, show me a few good nights out and some impressive vistas. I am the perfect mark -- a huge fan of "Wild Palms," William Gibson and Neal Stephenson's "Snow Crash," supposedly the science fiction novel that inspired Second Life in the first place.

Chris Abraham
View all articles by this author