Both Are Essential. Which One Are You?
READ THIS NEXT
You Can't Stop Instagram Bots by Looking. Brands Have to Stop Buying Them
Adam Cahill

Media departments and the work they produce tend to be organized around channels -- in other words, around what the media is .

I think the time has come to change that orientation, and instead organize around what our people do. And when it comes to digital media, we're moving very quickly toward a world in which there are only two things people need to do: math, and magic.

By "math" I'm referring broadly to what our agency calls platform media: the ability to buy placements using technology platforms, usually in real-time, one impression at a time. By "magic," I mean a creative approach to media that leads to things so fun and/or interesting that people are actually drawn to them.

Math is about dispersion: the functional delivery of impressions to people who haven't asked for them, but whom we hope to influence. Magic is about attraction: creating impressions so perfect that people choose to spend time with them, and maybe even pass them on.

First, the math
In the not too distant future most digital media is going to bought and managed through platforms. Remember the great Apple "Mac vs. PC" ads that ran on the home page of the New York Times a few years back, the synched units where Justin Long and John Hodgman interacted with each other across the screen? Well, unless you are doing an execution like that , the buy will be handled through a platform. Or at least, it will be possible to do so for those who are motivated to move to a new working model.

When people think about exchange-traded media and DSPs, the reflexive response is that these technologies are useful, but only as it relates to direct-response efforts.

It's a classic case of missing the forest for the trees. The forest: the infrastructure that enables digital advertising has been rebuilt, and we now have pipes connecting buyers and sellers directly. What's flowing through the pipes at the moment may primarily be unsold placements, but there's no reason that it has to be limited to that inventory.

Put another way: anything that can be transacted programmatically will be. And everything other than custom placements can be. We're seeing this begin to take shape already in the rise of private marketplaces, where publishers can transact directly with an approved set of advertisers.

The move to platforms changes the entire notion of digital media planning.

In this new environment the specific media channel is less important than the skillset of the person using the platform. When all forms of digital media are buyable through platforms, you don't need a mobile media specialist and a display specialist, for example; what you need is a platform specialist that knows how to access and value both sources of inventory.

In fact, the best plan in this world may well be no plan at all, at least not in the way we've thought about it before.

Instead going through an RFP process that leads to a buy with the seven most appropriate sites, a better approach is to go into market with seven hypotheses, knowing (or at least being open to the possibility) that the campaign you end up with may look very different from the one you started with.

Then, the magic
Years ago I worked on a project for RadioShack promoting their Xmods line. I had no idea what Xmods were at the time, but it turns out that there was a passionate community of people who spent loads of time building and customizing miniature radio-controlled cars.

An army of tinkerers, combining pieces to make their cars as awesome as possible.

When I look at the most inspiring digital work these days – the kind of stuff that is celebrated at Cannes, for example – I'm reminded of the Xmods subculture. It seems to me that when magic happens in digital marketing it is most often the work of tinkerers.

The magic comes from people who are immersed in digital culture, and who see connections between trends and technologies that others don't, and then fuse those things together to create programs that otherwise wouldn't have existed.

The things we remember a year later all share a spark and an energy of a particular kind. The craft and the joy of the tinkerers who created these things is something you can feel when you come across them.

Paid media is certainly important to these programs, but the ideas aren't driven by a media buy, because tinkerers don't want to just buy something off the shelf. They want to add their own personality to it. These definitely aren't ideas that come out an RFP process.

So who does this kind of work?

People who want to do things that haven't been done before. People who are constantly thinking, "What if…"

These aren't the subset of digital people who are blathering on about the latest UI changes to Facebook weeks before they happen. These are people who are more interested in doing things, mixing and matching and creating.

In fact, right now they're probably heads down figuring out how to create brand experiences that work with Siri, whether Apple wants that to happen or not.

The first is that they are both a much more hands-on approach to digital media. With magic, that means creating new experiences. With math it means managing programs on a daily basis, constantly evolving and improving.

The second similarity is that math and magic are both underdeveloped skillsets in the industry. They were nice to haves in the past; it was enough to have a handful of people who had these talents.

But from here on out, they're the two skills that matter most. 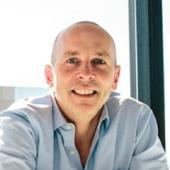