How Google Enlisted Bloggers to Spread the Word About Moto X

Informal, Personal Event At HQ Got Us Excited About Newest iPhone Competitor
READ THIS NEXT
You Can't Stop Instagram Bots by Looking. Brands Have to Stop Buying Them
Porter Gale

Several weeks ago, Guy Kawasaki invited me to a "secret" event that was going to be held at the Google campus in Mountain View. He didn't send a formal invite or a Paperless Post email, he sent a simple e-mail asking, "I'm hosting an event at Google will you come?"

Without any details I agreed, "Of course, no problem just let me know where and when."

The night arrived and I walked through the Google campus to the designated building. Googlers, in college-like attire, played volleyball in the courtyard and rode colorful bikes around campus pathways. After several wrong turns, I found the correct building and headed up the stairs to the check-in desk. There were no NDA forms, no security checks and no formalities. Simple plastic name cards and several smiling Motorola executives greeted me and invited me to join a room filled with several dozen people that can be best described as "friends of Guy."

Moto X event for influencers ahead of official press launch

I chatted with a couple of mommy bloggers, heard Guy introduce a champion Frisbee player, saw a past co-worker and had a brief conversation with Olympian Kristi Yamaguchi and her hockey-playing husband Bret Hedican. The room wasn't filled with journalists and there wasn't a line of photographers standing behind a designated cord. The evening felt like a potluck, not a product unveiling.

We were ushered into a small presentation room, Guy made a couple of jokes, showed us one of Bret's signed hockey jerseys from his collection and turned the night over to Rick Osterloh, the SVP of product at Motorola Mobility. I sat in my chair thinking about the odd turn of events. Guy, who is infamous as a past evangelist for Apple, was here hosting an event for Moto X.

Osterloh showed us the new Motorola logo, which had been unveiled several days prior. The "batman-wing" red and white Motorola logo had obviously "gone Google." Next Osterloh gave a low-tech presentation that included a demonstration of the voice-command capabilities of the device that are activated by saying "Google Now." He added, "It's a personalized system that would hear even when the radio is on."

He showed the phone's photo-taking capabilities, including gesture controls. He also showed how the device could be integrated into your Gmail account. (Oh no, more email clutter?)

The highlight of the presentation was an interactive demonstration, on a couple of work stations, where attendees could create their own custom-colored Moto Xs. The devices are assembled in Fort Worth, Texas, and Osteroh added, "We had to revamp our supply chain so you can get the phone in four days or less."

After the product demonstration, we headed to a low-key buffet in the courtyard. David Kelley, the founder of IDEO and a leading design innovator who was instrumental in many early Apple efforts, shared memorable tales over a chicken kebab and a deconstructed tuna nicoise salad. Kristi Yamaguchi autographed photos at a nearby table.

I was struck by how much this unveiling was personal, which not incidentally was one of the words Osteroh's PowerPoint presentation used to describe the phone, along with responsive and American-made. The mass-positioned, lower-priced phone will certainly give the iPhone a run for its money. I know my 11-year old has already been swayed by the custom colors available with matching Sol Republic ear buds. Apple verses Moto X? It will be interesting to see what happens next.

ABOUT THE AUTHOR
Porter Gale is former Vice President of Marketing at Virgin America and author of "Your Network is Your Net Worth." 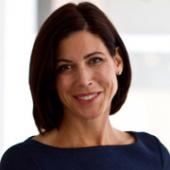