The Banner Campaign that Started a $24 billion Business, and Got a 78% Click-through Rate
READ THIS NEXT
You Can't Stop Instagram Bots by Looking. Brands Have to Stop Buying Them

Oct. 27 marks the 15th anniversary of the industry's first banner display ads, which appeared on Hotwired.com. To the many of you reading this who weren't in the business back then, that's not a typo; I'm not referring to www.HotWire.com, the travel site, but HotWired -- the first commercial digital magazine on the web and the offshoot of Wired magazine. 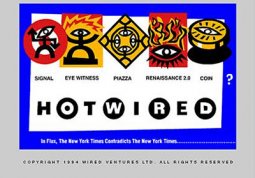 Hotwired.com's home page as it appeared in 1994.
For us, it started with a speech. It was May 1994, and Ed Artzt, the chairman of P&G at the time, made his landmark speech at the 4A's meeting in White Sulphur Springs, WV calling for marketers and their agencies to dive headlong into the "new media" revolution or be left behind.

My boss and mentor Bob Schmetterer, president of Messner Vetere Berger McNamee Schmetterer (MVBMS), a unit of Euro RSCG, was in that audience and he was totally energized by Artzt's challenge. It's important to note that our largest account at the time was MCI, which employed Vinton Cerf -- the "Father of the Internet" -- as VP-data services.

At the time I was an MCI account guy and Bob assigned me to this new media and created a deadline in order to jumpstart the agency's involvement in "cyberspace." Our challenge seemed simple: develop something called a "graphical ad unit" for HotWired. This initial assignment was under the guise of "let's explore this new medium and see what happens."

HotWired was the first commercial web magazine to attract blue chip corporate sponsorships dollars on the web. The site launched shortly before Netscape's browser, and the advent of such other new media such as Pathfinder.com (Time Inc.'s commercial web content offering) and Cnet.com.

Once the media commitment to HotWired was made, we needed to select clients we believed would share our excitement in entering this new space. We went through the client list and quickly reasoned that MCI (telecom), Volvo (automotive) and ClubMed (travel/hospitality) would be as good a core of candidates for this exploration as any.

Four of our then-clients placed ad banners as part of that first campaign, MCI, Volvo, Club Med and 1-800-Collect. (The other two advertisers were AT&T and Zima.) Keep in mind, this was 1994; the first graphical web browser, Mosaic, was less than a year old (soon to be replaced by Netscape Explorer), and Web access? Purely dial-up, 24.4kps if you were lucky, meaning these ads took a while to load. The online U.S. population? Two million, if that.

These "original six" were the first brands to take a leap of faith and place advertising in the unchartered "cyberspace" territory. But several didn't know they were taking it until after the fact. Corporate America was still largely unfamiliar with the graphical web, so we didn't even try to sell the concept. We decided to commit agency media and development dollars to place client banner ads on HotWired without clients' prior consent or knowledge. The way he saw it was if they liked it, they would be happy to pay us and if not, that was OK too; but at least the agency would get a running start at exploring this new exciting medium that was on course to change all of our (professional) lives.

AT&T banner ad
We were given the ad specs by HotWired and it was only then that we realized banners ads were clicked on and could drive consumers to a client designation on the web. Oops! This accidental lesson sparked us to develop websites for these initial ad banner placements. Some of our clients weren't too sure they even wanted to "interact" with this new online population. Can you imagine?!

Its launch in 1994 was not without debate internally as to whether the ad units offered to the advertiser community should be simple text links or graphical ad banner units. Graphical ad display banners won out and the rest is history. And take a look at the hilarious come-on AT&T used to generate a click-through: "Have you ever clicked your mouse right HERE? You will!"

The reaction ran from enthusiastic to somewhat leery. MCI, as one would expect, was truly supportive of our proactive initiative. Their corporate culture encouraged exploration. Volvo, on the other hand, understood the value of our experimenting with the new medium, but did not want to push/urge any interaction with the consumer. They didn't know what to expect, did not know how to handle responses and was concerned legal implications were involved. As a result, you see the first Volvo ad banner was nothing more than the Volvo logo and photo of an auto. No call to action or direction to click was to be incorporated into the Volvo banner. In fact, if someone clicked on that banner in October of 1994, it would take them to a simple questionnaire that could be emailed by the consumer on what kind of Volvo they might be interested in. 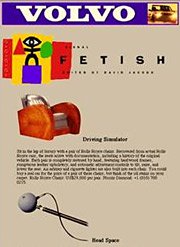 Volvo banner ad
Looking back at the birth of this industry and the first simple graphical banners, I am still amazed at how much has been achieved in the first 15 years. That said, I anxiously await the further advancements coming our way in terms of new ad technologies, ad forms and ad measurement capabilities (e.g. attribution modeling). The issues surrounding display banners and online brand measurement are many and have been well chronicled (see the recent special eMarketer report entitled The Online Brand Measurement: Connecting Dots for example).

Research suggests we have a long road ahead in terms of measurement -- and I don't disagree; however, I'm not convinced we're that far off. I don't believe there will ever be a "silver bullet" to solve all of our problems, as our industry is constantly evolving, becoming more complex and proving to be a moving target. But all that said, from what we have learned through the use of fundamental building blocks of acquired knowledge, industry and case studies, the use of traditional media metrics, the use of existing best measurement practices for digital and a quest to continually "test and learn," we will ultimately be successful.

Has any one item in our industry been encased with so much debate -- at times even disdain -- as to its true value, role and contribution to marketing communications from its inception in 1994 to this day? Yet the display banner is the impetus to the creation of the online advertising category that will reach beyond $24 billion in 2009, according to eMarketer. Perhaps more important, no other development since has advanced advertising measurement, effectiveness and accountability than the display banner.

So on Oct. 27, I hope you will join me in toasting the birthday of the banner display ad -- whether you are a "cup is half-empty" or "cup is half-full" type of person. Some days I love the business and others day... well, not so much... but I have to admit: it's been an unbelievable 15 years.

I leave you with a challenge... Can you guess the two-word copy from one of the original banner ads that generated 78% click-through rate? I look forward to your answers.

Frank D'Angelo
View all articles by this author