From Lenovo, the Greatest PC of All Time that Nobody Knows About | Ad Age
Skip to main content
Sign In Register

From Lenovo, the Greatest PC of All Time that Nobody Knows About

A Tabletop That Brings Back Family Game Playing Badly Needs Marketing
READ THIS NEXT
You Can't Stop Instagram Bots by Looking. Brands Have to Stop Buying Them
Kathryn Koegel

Lenovo, the Chinese manufacturer of staid laptops has created the sexiest, most exciting PC ever. This thing points the way to an always-on, interactive and collaborative digital-media future. But no one knows it, because the company doesn't understand anything about advertising.

The device is a 27-inch tablet called the IdeaCentre Horizon. You are not going to be schlepping this on the subway soon, but you will be moving it from your desk to the floor to your coffee table. In an upright mode, it's a large integrated computer with a Bluetooth keyboard. It was designed to show off Windows 8, with a tiles-based operating system that can be manipulated by touch.

The magic happens when you put it flat and turn it into a tabletop. It changes operating systems automatically to a new one called Aura, which shows you a wheel structure that spins to the category you want. The kids instantly went to games. Lenovo hasn't preloaded just what's hot on tablets and phones, but collaborative games that have stood the test of time. Air Hockey! Monopoly! Texas Hold 'Em! Each is re-imagined for the unique capabilities of the device. Four people can play at once. The kids called two friends and the four of them took their stations on the rug, where they remained, with only a brief break for dinner, until forced shut-down at bedtime.

Ever the ethnographer, I asked them what the allure was. Aside from the cute paddles for air hockey and so-cool electronic die for the digital board games, they mentioned how big it is: "the size of 6 iPads!" my 11-year-old pronounced. It made me think of everything I want to do with my TV and can't: I hate the interactive program guide and the way the remote works. It seems so 1990. Why can't I touch the TV to make it toggle between live and on demand, DVR shows and internet TV apps like Pandora, Netflix and Hulu? The Lenovo has an HDMI port, and I can make it my TV. Yes! 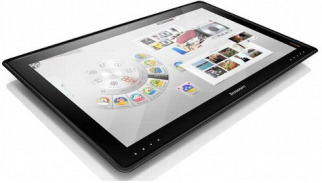 But who knows about it? If you build something this great, will they just come to it by word of mouth or "earned media" like the reviews in The Wall Street Journal, The New York Times or CNET? Absolutely not. Surely Lenovo must have run TV ads. Nope.

The company does have a video of the Horizon on YouTube. It's an example of how not to market a product -- all features and functionality. But as Steve Jobs knew with those first Mac and iPad commercials, it's not about the box, it's about what's in the box and where the box takes you. And this box takes you back to the earliest caves where people sat around a fire and played games with rocks and bones, or little wooden hockey sticks, and talked to each other.

As a mother and researcher about the impact of technology on social behavior, I abhor the isolation imposed by PCs. The iPad and iPhone are magic, but induce people to recede into their own worlds. The Horizon encourages people to collaborate, which must be the future of our society -- and of marketing itself.

This device screams out for marketers to start playing with it. Just as the iPad demands a new form of advertising that takes advantage of the swiping motions the product offers, the Horizon needs advertising that will demonstrate what the product itself gives us: maybe four people at once could interact with the ad.

What should tabletop ads encourage people to do? It's an exciting question, and one that I hope our digital-ad community tackles in these dog days of summer.

ABOUT THE AUTHOR
Kathryn Koegel is a media researcher and marketing specialist. She is currently working on an Ad Age Insight report about advertising on social media to be published in September.

Kathryn Kogel
View all articles by this author