Picture-Based Native Advertising: Marketers, You Have a New Language to Learn | Ad Age
Skip to main content
Sign In Register

Picture-Based Native Advertising: Marketers, You Have a New Language to Learn

Tweets and promoted tweets that contain pictures now show a cropped preview of the image right in the Twitter stream. It's a dramatic change to the user experience -- and one that creates a fantastic opportunity for savvy marketers.

But Twitter's move comes at the same time as Instagram is introducing its own take on in-stream visual ads (with mixed results for Michael Kors). Meanwhile, Pinterest is busy rolling out promoted pins, while aggressive brands like Taco Bell are pushing the envelope with early attempts at advertising on Snap Chat. Picture-based native advertising is suddenly coming on strong -- and brands need to figure out their strategies quickly.

Just as Twitter previously forced brands to learn to communicate effectively in 140 characters, it and other platforms are requiring marketers to learn new rules about communicating with pictures.

Compose for the crop. An image that isn't composed to look good within the crop of Twitter's in-line preview is like an overlong tweet where the text gets chopped off. Not only does the incorrectly cropped picture fail to communicate effectively, it tells users that you don't "get it" -- the worst position to be in for a brand on social media.

Communicate in the crop. If the full-sized image that a brand is tweeting contains more information than the preview can contain, that's great. But the preview image must deliver a compelling visual hook if the brand is to have any hope of engaging users who are rapidly scrolling through hundreds of organic tweets.

Samsung's promoted Tweet for its "Together we rise" campaign is an example of getting the composition wrong.

The tag line is cut off in the crop, and users are left looking at an out-of-context picture of the back of Lebron James. The text of the tweet helps explain things, but the cropped image needs to make sense on its own. This one is too easy to scroll past, as I bet millions of users did.

The image from Car2Go gets it right. The preview clearly communicates a promo code and a free trial for the by-the-hour car rental service. That was enough to get me to stop scrolling and click through, where I could immerse in the full-image view.

Use the right creative. With Instagram rolling out visual ads at the same time as Twitter's in-stream previews, it would be tempting for a brand to post the same image to the two different networks. But that's not going to work if your beautiful square composition optimized for Instagram doesn't translate well to the 2:1 rectangle of the Twitter image preview. The creative has to be optimized for the medium.

But communicating in the crop doesn't mean making Twitter's image preview just a banner ad in the stream, either. If brands start treating it that way, users will quickly become as blind to pictures on promoted tweets as they are to the average display ad. Movie studios appear to be the worst offenders so far, with a unit promoting "Ender's Game" coming off as basically a straight-up banner as bad as the movie's reviews. The reason native advertising programs like Promoted Tweets work is that -- by definition -- the ad unit feels native to the underlying platform. That doesn't just concern size and specification; it applies to the tone of communication and well as the authenticity of the social connection that the brand is trying to generate.

Make a call to action. This is where Twitter's image preview could become really powerful, especially on mobile. Savvy marketers could use Twitter images to include digital coupons or bar codes in the full-size picture that could be redeemed at stores by scanning the consumer's mobile device. Combine this type of promoted tweet with geo-targeting -- where the tweet would show only for mobile users within a mile of a Nordstrom store, for example -- and promoted tweets with pictures could usher in a new era of real-time social retail merchandising.

But brands exploring this new arena will need to remain vigilant on the execution, not only avoiding turning Twitter into an eyesore, but making sure that the full end-to-end journey is optimized in the initial crop. Samsung almost got it right with a promoted tweet for the Galaxy Gear that showed up beautifully in the crop, even on mobile phones, where so much Twitter consumption takes place. But when you click through, Samsung delivers you to a desktop-optimized site that is practically un-readable on a mobile device.

ABOUT THE AUTHOR
Tobias Peggs is CEO of Aviary, a mobile photo editing platform, and was previously CEO at mobile social ad platform OneRiot. Follow Tobias on Twitter. 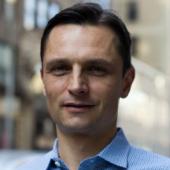 Tobias Peggs
View all articles by this author