Marketers Must Lead the Next Phase of the Ad-Tech Revolution
READ THIS NEXT
You Can't Stop Instagram Bots by Looking. Brands Have to Stop Buying Them

I am shaking with fury as I write this -- reeling from three incidents that individually might have gone unnoticed, but as a group tumbled into my consciousness, leaving me wanting to yell at the top of my lungs, "I'm mad as hell and I am not going to take it anymore," in a pathetic mimic of that famous scene from the 1976 movie "Network."

I was jolted to face the disturbing reality that because ad tech was created in a tech/VC echo chamber, largely excluding marketing practitioners, it is suffering from an overemphasis on the "product" side to the detriment of the human element of marketing. Through these individual experiences, it became painfully obvious to me that the unnavigable ad-tech sprawl is consuming more and more time and resources, yet we are accomplishing less and less.

The first incident started innocuously enough when I was working with an advertiser on a content marketing campaign. The client was working with a very large content venture to develop custom content using this platform's well-developed skill at creating funny, viral list content. Unfortunately, that approach just didn't translate well to do the heavy lifting required of great marketing, where effective brand messaging is key. The surprise creative epic fail of this content platform wasted a lot of time all around. Unhappily, it reminded me how far technologists still have to go in applying predictable technical approaches to the delicate and most unpredictable art of marketing.

The second incident startlingly revealed how often tech platforms overtly exclude agencies from any monetization upside. One large content creation/distribution platform that positons itself as a "system of record" for marketers, most irritatingly only sells to advertisers.

My indignation was further fueled by the reality that this provider, like most platforms, doesn't even bother to consider agencies in its revenue model. In its mind the agency is, at worst, obstructionist; at best, there to serve its client's business, which shields the platform from considering agencies as a channel. The colossal unfairness is one thing, but the corrosive relationship creates a lot of churn as platforms work around agencies, who are then left to play catch up.

The final straw was when I saw this recent article in Ad Exchanger: "Profitability Is The New Black," explaining how VCs are sharply curtailing their ad-tech investments because too many ventures are floundering. As the article states, "And companies that were flying high before they went public -- Rocket Fuel, Tremor Video, YuMe, Marin Software and Millennial Media are all examples -- saw their stock prices, followed by investor confidence, dip precipitously after opening day."

What fair-weather friends too many VCs are! They were quick to jump on the ad-tech profit bandwagon when pickings were easy. But now that the hard work is required to rebuild the industry they helped disrupt, they are fleeing fast -- leaving a colossal mess in their wake.

Today, $1 in active media spend is reduced by 60% to 80% due to fraud and all the arbitrage players who get a cut -- tech platforms, exchanges, buying platforms and the data guys. The image below dramatically makes the point -- advertising effectiveness is hemorrhaging from a thousand middlemen cuts, making the 15% media commission agencies used to charge "in the good old days" seem like a bargain. 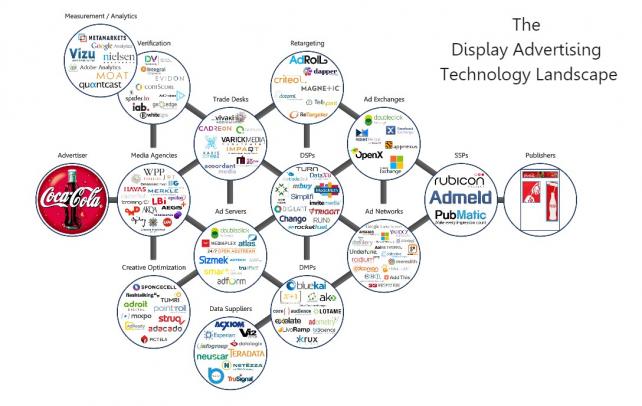 My anger swelled at the scope of the marketing efficiency devastation. And my frustration knows no bounds at the abundance of tech "products" with an appalling lack of "productive" solutions. We lack cogent solutions that let us reach real digital audiences with quality. We lack operational solutions that can untangle the mess of content-marketing platforms, digital media, social and influencer marketing. Mostly though, we lack systems where everyone has a chance to benefit -- investors, ventures, advertisers, agencies and of course "Judy Consumer."

It's clear that marketers have been on the sidelines during the last four years of the ad-tech boom. It's also clear that now it's up to marketing practitioners with a depth of expertise to rebalance the art and science of marketing going forward. Until then, not even chocolate can make me feel better.