Rather Than Protecting a Brand, a Disengaged Company Sees Negativity Flourish at Its Online Sites
READ THIS NEXT
You Can't Stop Instagram Bots by Looking. Brands Have to Stop Buying Them
Glenn Engler

As news of the grounding of the cruise ship Costa Concordia began filtering out of Italy last month and images, videos, texts and interviews became public, social media channels exploded. Beyond the human tragedy, the Carnival Cruise Corp. was quickly facing a public-relations and brand nightmare.

Consumers on social media are active, passionate and demanding of transparency and engagement. But in the days following the accident, it was clear that Carnival had no plan for dealing with them. Its main Facebook page continued to offer the usual updates on trips, deals and specific ships, while the Facebook wall became packed with several hundred comments expressing questions, fears, anger and compassion. Most went untended. The same thing happened in the Twitter feed. Micky Arison, the CEO of Carnival and owner of the Miami Heat, an avid tweeter, suddenly changed his tune –- from a smack-talking, fun and energetic basketball fan and cruise enthusiast tweeting 20-30 times a day, to a quieter, more measured executive.

On Jan. 19, six days after the accident, the following two posts appeared:

"Out of respect for all those affected by the recent events surrounding our sister line, Costa cruises, we are going to take a bit of a break from posting on our social channels."

"I won't be as active on Twitter for the next while. Helping our @costacruises team manage this crisis is my priority right now. Thnx"

The Facebook post appears to have generated some sympathy for Carnival -- more than 5,000 "likes" and over 800 comments, with mixed sentiment. But after virtually no public activity for nearly a week, Carnival returned to Facebook on Jan. 24 with a "we're ready to re-engage" post and much less positive welcome. There were 3,000 "likes" and over 600 comments, the majority negative. People were sharing their own experiences of safety drills comments on ship safety and shock over Carnival's 30% discount offer on future cruises to the Costa passengers involved in the accident.

With the public's comments appearing on the same social-media page as its own statements, Carnival's online image quickly became tinged with a negativity that is hard to reverse. Clearly Carnival's decision to go silent had backfired. Why?

Social Platforms Were Treated Like A Print Ad. In the face of such an accident, it's smart to perform triage, as Carnival did, and suspend the usual run of print ads in national newspapers offering last-minute cruise deals and targeted communications to lapsed cruisers and high-value prospects. But the company could not withdraw with the same effect from its "owned properties" (Facebook, YouTube, LinkedIn, Twitter, Google+) and conversations happening across online communities. Online never shuts down, and the public traffic only grew more intense and more negative, and Carnival wasn't present to moderate any of it.

Conversation Volume Tripled. In the two weeks after the accident, conversation volume grew by 320% compared to the prior two-week period, based on our research using Sysomos. Blogs, forums, Facebook Newsfeeds and Twitter exploded with comments, perspectives, questions and dialogue. Comparing the pre-accident two-week period to the post-accident two-week period, sentiment for Carnival plummeted from 91% positive/neutral (48% positive), to 66% positive/neutral (16% positive), a precipitous drop. Might engagement in those conversations by Carnival executives have prevented such a steep slide? 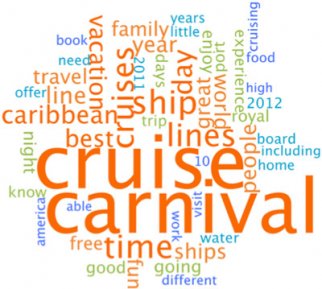 Word Cloud searched "carnival" and "cruise" before the accident, for Dec. 26 through Jan. 12.

Consumers Knew About the Carnival Linkage. Immediately following the accident, Carnival chose to put Costa executives front and center before the public, as opposed to senior Carnival executives. This may have been intended to isolate any potential spillover to the Carnival brand. Based on our research, consumers were clearly smarter and absolutely understood the linkage. Using the same two pre and post time periods across blogs, forums, Twitter, and Facebook Newsfeeds, you'll see in the word clouds a completely different play back of sentiment and association. Any questions about whether this is a Carnival issue? 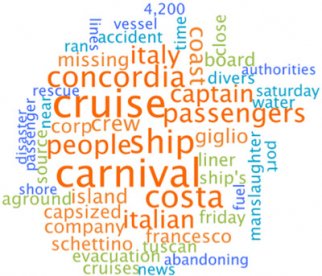 Word Cloud searched "carnival" and "cruise" after the accident, for Jan. 13 through Jan. 30.

Since the accident, declining bookings have been reported for the cruise industry and Carnival in particular. This is to be expected in the short-term, but the true test will be the longer-term impact. With the continuing investigation, expected lawsuits and upcoming trial of the captain setting off predictable threads of passionate dialogue over the next few months, Carnival is likely facing more adverse results on social media. Fortunately for the company, it has time -- though not long -- to learn from its mistakes following the Costa Concordia disaster and take a dramatically more pro-active approach.

This has to include engagement on Facebook and Twitter by the customer-facing personalities of the brand, including Arison, and bringing forward key individuals to answer questions and share ideas in chats, hang-outs or streaming interviews. By making available experts from the engineering, safety, design and onboard experience areas, among others, Carnival could reverse the perception of a closed, hiding brand toward one that "gets it" and is embracing transparency and engagement, even in the face of a horrible situation.

ABOUT THE AUTHOR
Glenn Engler is CEO of Digital Influence Group. 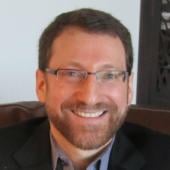