How to Put More Emotion in Storytelling

Digital Advertisers Have Forgotten How to Make People Feel Something
READ THIS NEXT
You Can't Stop Instagram Bots by Looking. Brands Have to Stop Buying Them

Advertising in the "Mad Men" era was glamorous, powerful and creative. Ideas from psychology and sociology merged with cutting-edge cultural trends to create powerful, iconic campaigns that verged on art, and which people still remember and even display on their walls at home. Just think of the classic "Coke" signs from the 1950s, VW magazine ads from the 1960s, or the "Marlboro Country" ads from the 1970s.

How far the industry has fallen in its leap to online and mobile. Today, most people regard digital advertising more as an annoyance than an art form. When was the last time you saw an online ad and thought, "Wow, that's really fun and amazing?" Have you ever been so delighted by a mobile ad that you turned your phone to show it to a friend? When was the last time you saw anyone (outside of an ad agency) display a printout of a digital ad on their wall?

The problem is that digital advertisers have forgotten a key tenet that advertisers in the 1950s and 1960s understood: The goal of advertising is not to convince people, or make them think something. It's to make them feel something.

And for engendering emotion, there's no more powerful tool than the story.

Also, our ability to remember data is quite limited. If you give people a data dump, presenting them with persuasive statistics and numeric information, they'll retain just a fraction of it after less than an hour. But if you cast that information in the form of a story, their memory increases dramatically. So it follows that if you want to tap into people's decisions, you want to make them happy, hopeful or mad -- then give them reasons for those emotions later.

The fact is, people have evolved to be storytellers and to respond deeply and emotionally to storytelling. If brands want to be as successful online as they were in traditional media a few decades ago, they need to relearn the basics of storytelling. Here are five principles I have learned and applied over a 20-year career at Pixar:

1. The hook. First, you need a good hook: Something that will catch the audience's attention and make them excited. But mere excitement isn't enough: They have to care about the action and characters.

2. Change. Showing a change happening is critical. When you craft a story, you need to show a character or characters changing. Do it right, and you'll engender a change in the audience, too.

3. Connection. Stories are the best way to connect on an emotional level with people. For that to happen, you need to use personal and shared experiences to connect with a specific or universal audience.

4. Story structure. Provide good story structure: In the simplest case, a beginning, a middle and an end. All good story plots are based on conflict and challenge -- desires thwarted, scary situations, people trying to accomplish something, failing, and then eventually succeeding.

5. Authenticity. Show some restraint when it comes to delivering your message. Sentimental not saccharine. If you hammer home the conclusion you want the audience to reach too overtly, your story will feel preachy or moralistic.

That doesn't mean data is unimportant. At Pixar, we use data and research heavily -- but it is used to improve our storytelling. For instance, suppose we're doing a movie about a rat living in Paris. We'll do research on French cooking and on Paris and about rats. But we'll go even deeper: We'll study human facial expressions, compiling data on the way pupil movements are shifting, the way the facial expressions move subtly in just milliseconds. So when you connect with these characters onscreen, you're connecting with them because the way their facial expressions and eye movements are operating have been researched correctly.

It's difficult for companies to embrace the fact that story is the number one business tool in the world. But those that have done it are among the most successful brands on Earth. Disney, of course, is built on storytelling. Apple, under Steve Jobs' leadership, had an incredible understanding of story, and was able to build a whole customer identity around its stories of imagination, possibility and inclusiveness. Tesla is successful in large part because of Elon Musk's amazing storytelling powers -- just watch one of his presentations to see how successfully Musk uses emotion and narrative.

If brands want to reverse the negative perception of their online advertising, and start building real value, they need to learn how to tell better stories. It's as simple as that. 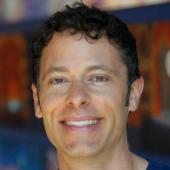 Matthew Luhn
Matthew Luhn is a 20-year veteran of Pixar. His story credits include "Toy Story," "Monsters Inc.," "Ratatouille" and "Finding Nemo." He will be delivering a keynote with Quantcast CEO Konrad Feldman titled "Once Upon a Time in the World of Data Creativity" on June 21 at Cannes Lions 2016.
Follow View all articles by this author