READ THIS NEXT
You Can't Stop Instagram Bots by Looking. Brands Have to Stop Buying Them
Any content that attracts a mass audience of course attracts marketers and advertisers.
Credit: Chris Ratcliffe/Bloomberg

The ease and availability of text, image, and video platforms have allowed humans to "connect" at scale. Think of the reach of Facebook and WhatsApp. But with today's headphone generation, there's a growing market for audio content beyond music. Every company from media outlets to consumer brands should have an audio strategy as content creation and consumption habits continue to shift.

From 24-hour news to endless social media streams, content is every brand's currency. Brands today have realized that connecting with people requires content that tells a story. For media outlets, content (even hard news) has always been about storytelling, but current tactics like recording audio of print articles won't succeed long term.

Audio content is in a place where blogging was before Blogger, Tumblr and, subsequently, Twitter for microblogging. Today, there's a similar opportunity for companies in audio. Experiential audio content is easy to create and share, and, on the consumption side, the user experience is improved with content built around people telling stories through voice conversations.

No doubt that text and video can be powerful. Tweets and videos can garner millions of views and shares in just minutes. However, there's a place for audio content both to supplement text -- just like images and video -- and to serve as the primary form of content when video might not be feasible or appropriate.

Facebook jumped in recently to try and solve part of this issue for one-way broadcasting with their new Live Audio feature.

Whether for one-way broadcasting or capturing two-way conversations, video might not be an appropriate format. This is especially true for interviews or dialogue about controversial or sensitive topics where video doesn't really add anything to the conversation. Yes, video and images can bring a story to life visually, but many times the conversation is the story.

Any content that attracts a mass audience of course attracts marketers and advertisers. What began as content recommendations quickly became a marketing play, and is now a multi-billion dollar industry. Some people expressed doubt about the viability of Facebook Live Video feature for advertisers, and I agree that even their Live Audio may pose limitations for many advertising and publishing models, but there are still many advertising opportunities for audio content.

Advertising isn't new to the audio space of course. Radio has been an advertising medium since the beginning. Still, there's a large untapped opportunity for brands to reach consumers and publishers to monetize audio content beyond traditional ads. Even in podcasting, advertising is still in its infancy. According to Pew Research Center for Journalism and Media: "In 2015, advertising spending on podcasts was estimated to be around $34 million dollars -- a small drop in the bucket compared to most other major media sectors."

So what's holding back audio?

Radio and podcasting have existed for a long time but aren't aligned with the shift in how people create, consume and share content. In our always-on, mobile-first world, radio (outside of music) really hasn't found a new home. Besides music, conversations are the most interesting part of radio, but radio and podcasts lack the elements of discovery and social that drive content today.

The big challenge is making audio content more social. Along with Facebook Live Audio, there are other new tools trying to help solve pieces of this puzzle, including Shortcut from This American Life and WNYC's open-source tool for audiograms. Making audio content more social may also help the advertising side. According to Pew Research: "While the podcast industry is growing, some observers and industry insiders say that the lack of better metrics is acting as a brake on more rapid revenue growth."

Social shares of audio content could be a powerful added metric to guide both advertisers, content producers and publishers.

There are still a lot of challenges ahead for audio. However, as companies of all kinds face the need for more and better content to engage consumers, readers, listeners and advertisers, audio has massive potential that technology will continue to enable. 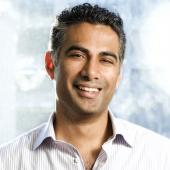 Neil Mody
Neil Mody is CEO of SpareMin.
View all articles by this author