Why You Should Replace Your Social Media Experts With Wild Animals

No Need to Hire an 'Expert' When We're All Naturally Programmed to Be Social
READ THIS NEXT
You Can't Stop Instagram Bots by Looking. Brands Have to Stop Buying Them
Jim Louderback

In late May blogger Peter Shankman shocked the blogosphere by loudly proclaiming that he "would never hire a social media expert" and nor should you. I had an opportunity to chat with Peter about this on my friend Stewart Tracte's Beer Diplomacy podcast, and I ended up with a similar conclusion -- but I say replace those experts with wild animals! Here's why.

I ran a number of websites in the '90s and the 2000s, and back then SEO experts were all the rage. SEO -- or search engine optimization -- really took off during that first dot-com boom, paralleling the growth of Google. By 2002, SEO was the holy grail -- a magical way to first get your pages to the top of common searches, and then make millions on the ads. As SEO grew, so did an army of self-proclaimed gurus.

These consultants -- often armed with no more than a real-estate license -- would parachute into an organization and proceed to spew vociferously about meta-tags, link density, anchor text and optimized site structure. But after whipping a small core of developers and producers into an SEO froth, a queer thing happened. Once the hedge wizards fled the castle, all their promised SEO juice turned quickly to vinegar.

While running the sites at Ziff Davis Media, I finally began to understand why -- helped out by our VP of Audience Development Steve Sutton. Steve's bias was that SEO consultants were fundamentally flawed -- true page growth would only come if everyone in the organization embraced SEO principals and lived them day in and day out.

For Steve, it wasn't enough that pages were re-coded to support best SEO practices. If the writers, copy editors, sales assistants and management didn't fully grok them, then all those principles would be like so much dust in the desert. Instead, under Steve's tutelage, we took a different approach, and helped everyone embrace SEO principles and practices. And it worked.

Today's social-media strategists are just like those SEO-oil salesmen, but with one fortunate twist. SEO remains a non-intuitive art, requiring awkward phrasing and unnatural connections between sites and pages. But when it comes to social we all have a leg up: Deep in our genetic core we're all fundamentally social wild animals. Being good at social is part of what it means to be a good human being.

Just as effective SEO can't be practiced by a core group of consultants or ivory-tower priests, social strategy is too important to trust to these new, modern day "experts.. Everyone in your organization needs to embrace, enjoy and infuse the social nature of your company, your product and your services. In the '60s we had The Organization Man, a faceless drone that marched to a collectivist tune, furthering the goals of the company. Today we need to celebrate and unleash the individual uniqueness of everyone in the company, and encourage them -- with a few guiding principles -- to become the social face of the palace.

For example, look at NBC -- and NBC News in particular. I'm sure there are nests of social media vipers, whispering strategy, faking tweets and wrapping themselves in the charlatan's cloak. But an unassuming cameraman with a keen vision of the future and an outsized ability to communicate has done more to positively shape the face of NBC than all those snake charmers. In the early days of the service, "NewMediaJim" provided a rational counterpoint to the "media is dead" hype championed by other early adopters. Today he provides commentary on social memes, insight from conferences he attends, and a heady glimpse into the fascinating life of a cameraman who could be following Brian Williams into Afghanistan one day, and traipsing after a news-making senator in D.C. a day later. Jim Long paints NBC News as a captivating, moral and hard-working place, despite the fact that he's got nothing to do with the marketing department at all. Check out Jim Long's twitter feed to see what I'm talking about.

Here at Revision3, we encourage -- but don't require -- our staff to use their natural social ability to help shape Revision3's persona. Check out Zac Minor, who recently celebrated his one-year Revision3 anniversary on twitter, or Mauricio Balvenera, who posts pictures of our woefully undersized conference room and recently ousted Zac as Foursquare mayor of our kegerator. Between the two of them -- and others too -- they've done more to help shape Revision3's image than a whole army of "experts".

So yes, I agree with Peter. Throw out the strategists. Instead, encourage everyone in your company to unleash their inner social animal. It's the "natural" thing to do. 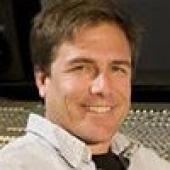