Rethinking Brand Positioning in a Nation of Narcissists

Brands Were Once Cornerstones of Consumer Culture. Not Anymore
READ THIS NEXT
You Can't Stop Instagram Bots by Looking. Brands Have to Stop Buying Them
If every person wants to be a brand and every brand wants to be a person, where does that leave marketing? What does it say about our culture that young girls want to become celebrity brands like Miley Cyrus, while companies and products compete with unabashed fervor to be our friends?

Brands were once the cornerstones of consumer culture. With the ascendancy of social media, consumers increasingly subsume brands. They're now the producers and the consumers. Meanwhile brands are sidelined to serving "content." Which, sadly, makes marketers sound like caterers: ferrying drinks to VIPs at a cocktail party, desperately hoping everybody likes the appetizers.

Advertising -- long acknowledged as both taste-maker and toastmaster in American culture -- is now mostly a facilitator. It's the hired help. Let's face it, though: Brands are lucky consumers let them into the party in the first place. Rather than barring the door, they've brought brands into their social scene. They've taken us inside their houses, they've shared their thoughts and they've expressed sincere interest. We may be living in a nation of narcissists, but consumers are actually encouraging brands to behave more like people -- in other words, more like them.

People have always projected: We put on our best face in public. But that kind of social projection used to happen in private encounters, smaller settings. It wasn't mediated. The message wasn't packaged and broadcast across global networks such as Twitter and Facebook. People weren't building their own personal brand. They weren't marketing themselves.

So ... where does that leave marketing? For the sake of comparison, it's worth taking a careful look at celebrities. Twitter -- now a must-have tool for marketers -- first reached the mainstream when celebrities started tweeting. It's no surprise that fans love to know what their favorite stars are doing, thinking and feeling. But the attraction isn't limited to hearing what's going on in their heads -- it's also about getting inside their heads.

Last summer, for example, a distraught woman tweeted her plans to have "head 2 toe" plastic surgery to resemble Kim Kardashian, hoping to please her star-struck husband. This prompted a quick response from @kimkardashian: "Pls don't. Ur husband should love u 4 who u are! Don't try 2 b someone else. Im sure u are beautiful inside and out! Just as u are." It's an extreme example -- but a fascinating lesson: Celebrities are now supporting and cheering for their fans, rather than the other way around. Twitter is a social equalizer.

This cultural shift is particularly evident with teenagers. Raised during a decade when some of the most popular television shows were "reality" programs -- "Real World," "Survivor," "American Idol," "The Apprentice" and "America's Next Top Model" -- today's teens have come to expect that anybody can become a star. Instantly. They don't even particularly need charisma or talent -- witness the success of "Survivor's" Richard Hatch and "American Idol's" William Hung. All they really need is a spotlight.

Jacob Lewis, co-founder of teen literary social salon Figment.com, observed that in the past there was no expectation that famous authors would correspond with their readers. "That's not true now," says Lewis. "There's been a fundamental shift. When kids today interact with the authors they love, they expect a response. They demand a response. Reading isn't a passive experience for them; it's a social one. People want to participate."

Which means it's a mistake to get too preoccupied with notions of narcissism, because there's also a brighter side to this paradigm: a vibrant culture that finds value in creating and contributing, not just consuming.

Brands aren't celebrities. They're not people and they're not peers. But they can be very useful friends. And that's worth considering in this new creative context. There's a party going on -- now go serve those canapes. 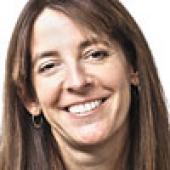 Patti Ziegler
View all articles by this author