We Need to Set the Bar for Ads Higher Than Ever
READ THIS NEXT
You Can't Stop Instagram Bots by Looking. Brands Have to Stop Buying Them

Digital advertising brings us many things -- the news we need, the videos we love, even the games that make our commute bearable. Not only does digital advertising provide awareness of products and services, it supports an entire economy of journalists, bloggers, vloggers, coders and artists.

Now, the web of interconnecting technologies that makes this all possible is incredibly sophisticated (some have said "heroic"), but its rise has also given users a chaotic and at times broken experience. Too often, we see complaints about spammy, repetitive ads, slow loading times or ineffective controls. These frustrating moments, coupled with broader industry concerns over fraud and ad blocking, are clouds on an otherwise sunny horizon. But left unchecked, these trends could upend this economy. To sustain our industry and the internet we know and love, we need to set the bar higher than ever. Here at Google, we believe there are three things our industry needs to unite behind, now.

The idea that "one bad apple spoils the bunch" is cliched, but it's an apt description of the dynamics of ad blocking. If someone has one bad experience with an ad -- maybe it interrupted what they were doing, or tricked them into clicking on it -- they could be prompted to install an ad blocker. Once they do, every other publisher on the web pays the price. Given what are undoubtedly some pretty bad ads out there, it's not surprising to see rates of ad blocking on the rise.

As an industry, we have to take action. It's not enough to simply say "the storytelling needs to be better" or "we need more interactive formats." We need to restore the contract of good faith with consumers by doing everything we can to ensure a good user experience. We need better data, so we can understand which experiences are actually the most annoying, and clear standards, so that major players are starting from the same baseline.

2. The controls have to get clearer.

Online advertising is complicated. Okay, that's an understatement -- it's ridiculously complicated. Behind the actual web that consumers use is another, largely unseen advertising web of networks, ad servers, DSPs, SSPs, DMPs and a whole bunch of other entities with mysterious acronyms. The protocols for how these different players work together evolved largely in the era where desktops were the first (and in some cases only) screen.

We're clearly far beyond those days, but the controls to help people see and choose how their data is used, and what ads are shown, are often based on this outdated model. For example, if someone wants to make changes to their ads preferences today, they have to do so on each separate device that they own.

It would be much clearer, more intuitive and more transparent if I could go to one place and make those choices for all my activity at once. If I want to stop a particular ad from being shown (let's say I bought that pair of shoes that's been appearing everywhere), I often have no way to reliably achieve that. We need to prioritize these kinds of user-friendly experiences.

I'm hardly the first one to say that the continued existence of ad fraud threatens our ecosystem. Fraud undermines the stability of our ecosystem on several levels: It erodes advertiser confidence in the system; it harms the user experience (injecting ads where they shouldn't appear or even exposing people to malware); and it diverts dollars from high-quality publishers to scammy operations.

There is a lot of great work being done by technology vendors, publishers and industry associations to take this on, but as long as this bad behavior exists anywhere in the ecosystem, everyone pays the price. We need to share information more regularly, prioritize investments in this area and make public examples of the worst actors. Advertisers and publishers need to actively question results that seem too good to be true -- like a sudden, unexplained spike in traffic or engagement rates.

I've spent the last 12 years building advertising products. My first job at Google was helping to improve the text ads that ran alongside search results. Our industry has done great work to tackle communal user-experience challenges before: fighting invalid clicks, eliminating pop-up ads, transitioning from Flash to HTML5, creating the AdChoices system. It's clear we have the talent and resources to create a bright future for advertising. These are significant challenges, but like those that came before, they are all solvable. It would be our industry's most heroic achievement yet. 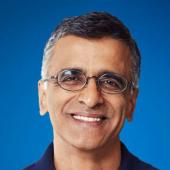 Sridhar Ramaswamy
Sridhar Ramaswamy is senior VP-ads and commerce at Google and is Brown University Graduate School's 2015-16 Horace Mann Medalist.
View all articles by this author