What the Changing Role of Social-Media Influence Means for Brands

TV's Influence on Consumer Behavior Decreases, While Social's Increases
READ THIS NEXT
You Can't Stop Instagram Bots by Looking. Brands Have to Stop Buying Them

If you thought the sea change caused by social media was hitting a plateau, think again. For over two years, CivicScience has tracked a survey question that asks U.S. consumers what influences them more when it comes to what they buy, where they eat and what they watch: TV ads, Internet ads or chatter they see on social media. Watching this trend line over time reveals some interesting findings. 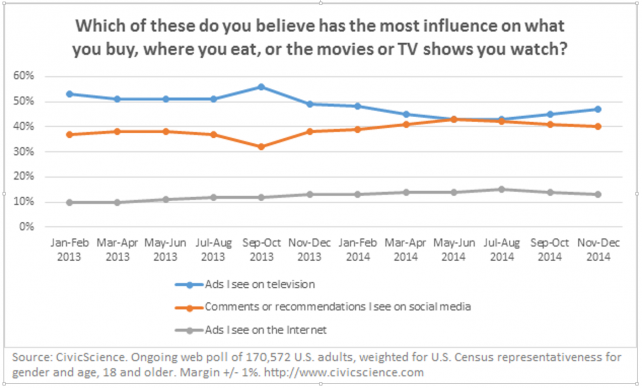 The question was posed to over 170,000 U.S. adults over a 24-month period, via polls running on hundreds of publisher websites. Total responses in any given month ranged from 2,000 to over 5,000, and the data was weighted for U.S. Census gender and age.

Television advertising began in a fairly strong position, influencing just over half of consumers, between January and August 2013, then it saw a spike in September and October 2013 to 56% of respondents. From there, it declined to a low point of 43% from May through August 2014. Meanwhile, social media showed an inverse correlation during this time period, remaining in the low 40% range since March 2014.

The patterns "go seasonal" again shortly thereafter during fall 2014, possibly because new TV season content is shifting some percentage of eyeball attention (and influence opportunity) from second-screen devices to the TV screen.

But overall, the trend shows an increasing percentage of consumers saying social media chatter influences them the most. The proliferation of portable second screens is no doubt a big factor here. During this same time period, our data show that smart-phone ownership has grown from 53% to 67% of U.S. adults, and tablet computer ownership has grown from 32% to 52%. However, this hasn't yet necessarily translated to more people watching full episodes of TV content online; those numbers among U.S. adults overall remained relatively flat in the same period.

While live viewing is still the preferred way for most to consume TV content, those who say they are most influenced by TV advertisers remain as a whole more "traditional" in their attributes. Looking at their aggregate profile, they tend to be over age 45, watch more than four hours of TV daily, prefer traditional communication methods (phone calls), and do the majority, if not all, of their shopping in stores. They are more likely to drive American-made cars and eat most often at fast-food chain restaurants.

In contrast, the segment which says they're influenced the most by social media comments has a slight female skew; they are more likely to be 18- to 29-years old; say they're addicted to digital devices; prefer to eat at fast casual chains or independent, local establishments; are more likely to drive a Japanese-made car; and favor watching TV via DVRs. This is the group that advertisers need to focus on because these consumers pay close attention to peer recommendations, and sharing is only a click away. Their "market maven" attributes can make them powerful allies in driving product adoption.

We don't see nearly as much trend-line activity in Internet advertising. Online ads influenced about 10% of respondents in January 2013, peaked at 15% in August 2014 and closed out 2014 at 13%. It has not dropped below 13% since October 2013. The segment skews slightly more male and more tech-savvy than the general population, and their incomes tend to fall at the highest and lowest ends of the earnings spectrum. They largely prefer viewing TV content through online streaming services, tend to closely follow tech news, likely play video games daily, and do the most online shopping. Tech advertisers and online retailers should strongly court them.

The technology and data exist to allow marketers to regularly track the pulse of consumers and to catch seasonal and trending changes as early as possible. This data shouldn't lead to proclamations of an inevitable demise of TV advertising or doom for Internet advertising. Instead, it should put a spotlight on the need to better understand these different audience groups, and develop creative strategies that would appeal to and leverage them. We advise to not solely rely on social media chatter for this data; it's likely to paint only a partial picture. 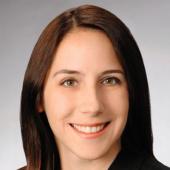