READ THIS NEXT
How restaurant chains are duking it out to be the best in their categories
Nicholas Felton's 2008 Annual Report
Credit:

As unwieldy as this accumulation of numbers, texts and facts might seem, the growing field of information visualization?infoviz, for short?has helped to clarify, and often, beautify, the clutter. With infoviz, the once murky cloud becomes meaningful through images, charts and interactive graphics. 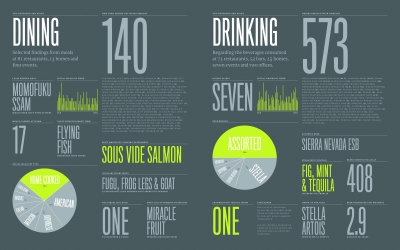 Nicholas Felton's 2008 Annual Report
Under the general definition, infoviz can include an editorial information graphic comparing pay differences between men and women by profession, interactive maps studded with geographically rooted weather data and word clouds of President Obama's speeches. One well-known non-numerical example of infoviz is Jonathan Harris and Sep Kamvar's "We Feel Fine" from 2005, which aggregates and organizes data from the blogosphere?the system searches new blog posts globally and records sentences about feelings to database human emotion.

Though humans have been visualizing information since the beginning of civilization?Manuel Lima, a London-based infoviz researcher, points to 3000 BC when Sumerians developed cuneiform, pictographic written communication?modern infoviz is rooted in computer science. In 1990, computer scientist Ben Shneiderman created the tree map, a collection of proportional, color-coded horizontal and vertical bars, which he first used to visualize the hard drive of a shared Mac.

In the last decade, designers have become more involved in the discipline. In many ways, infoviz parallels information design, the segment of visual communication concerned with presenting information graphically?the statistician/design prophet Edward Tufte famously wrote about the topic in the 1982 book The Visual Display of Quantitative Information. While the two disciplines both aim to transform data into meaning through graphics, Lima says infoviz boasts a specific distinction from the sibling field. 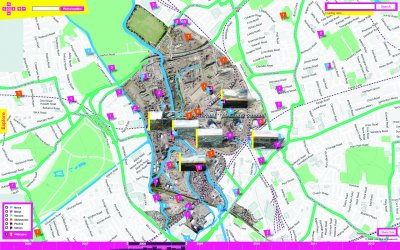 Stamen Design: London 2012 Olympic Park map
Regardless, designers' influence on the field?the elevation of aesthetics, the ability to communicate effectively with more mass audiences?now means that exceptional infoviz is a perfect storm of its computer science roots, dexterity with large sets of data, intuitiveness and plain old pretty. "It used to be that design, statistics, and computer science were very separate when it came to visualization, but it's becoming necessary that a single person have a combination of skills: aesthetics, analysis, and implementation," says Nathan Yau, a statistician and founder of FlowingData.com, an infoviz blog, and YourFlowingData.com, a personal data mining site in beta.

This convergence of left- and right-brain thinking, technology and complex sums of data would presumably point to an infoviz future ruled by designers skilled in Flash, Processing and databases or computer scientists with an eye. Yet increasingly, infoviz is in the hands of the everyday internet user, whether they know it or not.

IBM Many Eyes: Word cloud of President Obama's Inauguration address
And storing all that data, even for the average person, is hardly a hurdle. Today, one petabyte, 1 million gigabytes, fits on1,000 iPods. Lima says by some projections, a regular laptop will have the ability to store that much in 2030. That means any laptop owner could store the equivalent of 10 times the data in the Library of Congress, the largest in the world.

Here's a glimpse at how data today is taking visualized shape through five designers, each representing a type of visualization, from Aaron Koblin's crowd-sourced artistic pursuits and Stamen Design's maps to Nicholas Felton's personal data mining.

Martin Wattenberg and Fernanda Viegas, IBM Visual Communication Lab
When Flickr introduced tag clouds, a word-based visualization, they were instantly popular and meant, to most, that the internet has yet another user-generated way to organize information. For computer scientists like Martin Wattenberg and Fernanda Viegas from IBM's Visual Communication Lab, the tag clouds phenomenon signaled the potential of visualization tools outside of the endemic professional communities. As part of their ongoing research on visualization, computer scientists and artistic collaborators Wattenberg and Viegas launched ManyEyes, a site that professes to democratize visualization by putting viz tools in the hands of everyday internet users. ManyEyes users can upload data to the site and then select from a number of visualization techniques to render the data into charts, graphs and word clouds. Meanwhile, Wattenberg and Viegas sit back, watch ManyEyes activity and see what the public comes up with.

"Why not set these tools free and give people the ability to upload whatever data they want and have the experience of really engaging with the data through a visual interface?" Viegas says. "Once we launched the site, it was gratifying to see that people were using these tools in ways we hadn't imagined before. It turns out that there was this big religious set of visualizations, where people were trying to visualize the Bible. It was interesting to see what kind of discussions came from that. Visualizations become social artifacts around which people have conversations."

"Traditionally scientists were the ones inventing new visualizations so they focused on scientific thinking," Wattenberg adds. "They focused on how we help people make discoveries and get insight. And visualization is great at that. But there are so many other kinds of thinking. We think emotionally, socially. We don't just drill for insight. We gossip, we chat, we construct a new identity for ourselves. And I think there's vast potential for visualization to help us do all those different kinds of thinking. We think there's a huge future for that."

Nicholas Felton
After tracking data bytes in his own life?hours of work versus play, days spent abroad by country, beers consumed? New York-based designer Nicholas Felton published an annual report, the Feltron Report, a data geek brochure of charts and graphs that visually measurable snapshots of the 31-year-old's past year. Since then, Felton, created daytum.com, a site where anyone who registers can input their personal data and select preloaded visualization techniques to create their own profile page-style report. So far the site has more than 10,000 users who are logging in daily to record how many cigarettes they've snuck, work emails they've sent or movies they've watched. At his graphic design studio Megafone, Felton creates infographics for publications like New York magazine and Esquire, as well as logo, print and web work.

Stamen Design
Boutique information design firm Stamen Design focuses on Web-based information visualization and map-making. The San Francisco-based studio, which was founded in 2001 by Eric Rodenbeck, uses interactive maps to communicate geographically referenced information, as well as visual interfaces to organize data. Shawn Allen, Stamen partner and design technologist, says that since Google Maps went live in 2005, online maps require a lot less explanation than many infoviz genres. And Michal Migurski, partner and director of technology at Stamen, adds that familiarity opens the door for immediate communication and a bigger impact, but that doesn't mean all maps online should look like Google maps.

For the London 2012 Olympics, Stamen designed a drag-and-zoom map of the park to house news stories, photos and videos of preparations for the Games. Other recent projects include a hurricane tracking site for MSNBC and Flickr Clock, a browser that plots submitted video on a timeline. For Adobe's Kuler community site, Stamen created another non-map viz tool, Pulse, a color trends visualization tool that highlights popular colors, sortable by country and season, on a color wheel?Stamen has also designed Mappr and the Nikon Stunning Gallery for the picture sharing site. Elsewhere in the Web 2.0 world, Stamen has partnered with the content sharing site Digg to create five types of visualizations for the site's flood of stories, images and tags on Digg Labs. A non-client project, Cabspotting, is a visualization of taxi activity in the Bay Area and an example of how Stamen can tackle both design and research projects?this work is now part of MoMA's collection after being featured at the museum's Design and the Elastic Mind exhibit last year.

Koblin: 10,000 cents
Aaron Koblin
Aaron Koblin's visualizations live somewhere between the realms of art, crowd-sourcing and massive data sets. His most recent project with Daniel Massey cobbled together 2,088 voices for the online installation "Bicycle Built For 2,000." Through Amazon's Mechanical Turk crowd-sourcing service, 2,088 contributors were paid six cents each to record short clips, which were then sewn together to collectively sing "Daisy Bell," the first vocals to ever be computer synthesized. This project followed "Ten Thousand Cents," for which Koblin commissioned Turk workers to each draw a small bit of a hundred dollar bill for one penny. All together, the interactive mural formed one complete Benjamin. Koblin, technology lead at the Google Creative Lab, has also created "Flight Patterns," a visualization of airplane routes over North America and the "New York Talk Exchange," which plots communication out of New York City to cities around the world. 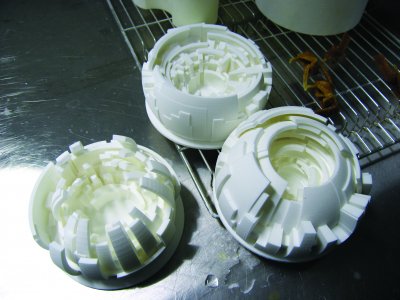 Watz: 3D printed sculpture
Marius Watz
Pursuing a more aesthetic end, artists like Norway native Marius Watz have also co-opted visualization techniques?not to bring clarity to data sets, but to make beautiful works out of them. Trading in the paint brush for tools like Java, Processing and Flash and other computation models, Watz has built drawing machines in software and captured stills of the code in action, created visuals for live music shows and printed 3D visualizations with 3D printers. He's applied his craft to ad work too, and fed stock market data through algorithms for a print campaign for Knight Capital Group. For Nokia, with W+K, London, he created a text message app that transformed text messages into swelling, swirling visualization.