Apps/Successes: ShopSavvy, one of the free barcode-reading, location-aware shopping assistants that made its debut along with the G1, as well as Tunewiki, a location-aware music sharing app that won the initial Android Developer Challenge.

On brands stepping up in the mobile space:
Alexander Muse: "Retail brands really to need to think about what purpose they will serve in the future. Competing on price is important, but price isn't everything. Starbucks isn't selling coffee, it's selling an experience. The same is true with many brands. Just as mobile applications and devices allow consumers more relevant information at the time of purchase, they can allow retailers to tailor their offerings to each consumer in a unique and powerful way. Most retailers are concerned, even afraid of the information their customers have. Soon they will realize that just as the customer has a direct link to information, the retailer can now have a direct channel to reach that same customer. The opportunity isn't zero sum?both sides can win. Knowing your customer and connecting to him in a deep and meaningful way will help create very powerful relationships between customers and brands. There are big opportunities for both parties in the transaction. Of course, this will take a while to become obvious. The first step for brands is to understand what consumers are seeing. They need access into the systems operated by companies like ours. There are endless opportunities to use that information." 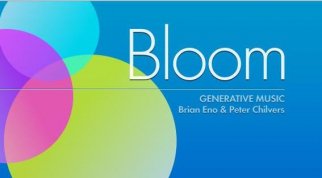 Apps/Success: Bloom, a $3.99 music application that allows users to create ambient music by interacting with the touchscreen.

Chilvers worked on the Maxis game Spore and prototyped ideas for playing generative music, and built a mouse-controlled version of Bloom afterward. Originally the animation was a placeholder and the sounds were favorites from Eno's catalog chosen by Chilvers, but it all worked effectively so they kept them in. When the iPhone SDK was announced, Chilvers says, everything made sense.

"[Generative music] required something with at least some computational power, which meant a computer," Chilvers says.

"Unfortunately, most people don't want to sit at a computer in order to listen to music. When the iPhone came along, suddenly there was a platform specifically designed with music and media in mind, but with computational power." After working on larger projects, he says, he's glad to be developing with a small group, and sees how it's stimulated others. "The return to smaller team sizes has been quite liberating?we're seeing all kinds of bizarre applications that no one could have dreamed of, and which I suspect would never see the light of day if they'd had to go through corporate channels."

As Tom Plewe developed a 3D modeling tool to use at architecture school, it started getting bigger than he'd expected; that tool became a popular character modeling engine called Silo. As time passed, creative interests branched out, leading from the tight focus on game designers to mass market CameraBag. "Everyone in the company has broad interests and creative capacity, and works on a number of different things, depending on need," Plewe says. "One of our company goals is to remain small, so everyone has to be flexible and creatively intelligent. We all float from one thing to another. For example, our business and marketing guy is learning programming, and has made a new camera filter that we hope to have out soon in the app store. We emphasize lifestyle maximization over profit maximization, so we try to maximize the number of interesting things each person can work on." 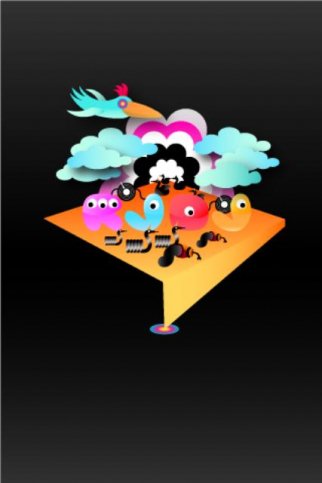 Apps/Success: RjDj, a $2.99 iPhone music app allowing users to create musical experiences with various artists' sonic palettes, with input from the microphone, which adds layers of sound based on the everyday world around the user.

Principals: Founder Michael Breidenbruecker acted on an idea he had at a rave in Zurich in 1999, to allow people to make music simulating the effects of drugs.

Breidenbruecker built a prototype, but deemed it too unwieldy and went on to his next project, helping found popular music listener collaboration engine Last.fm. The introduction of the iPhone allowed Breidenbruecker to simplify his earlier hardware solution.

"One of the innovative things [about] RjDj is that it makes music technology much more pervasive in people's physical environment. It isn't about playing around with sounds on a computer or keyboard but about turning the physical world of the audience into a musical orchestra," Breidenbruecker says. "By enabling fans to create a soundtrack of their own lives based upon one of the scenes, an artist can effectively fuse their world in the studio with the world of their audience. I believe there are very real revenue opportunities for brands in the case of RjDj, although this may not be the case for other mobile apps."

Apps/Success: NRU, an app (currently only available in Europe) that uses the G1's location-based services combined with the phone's internal compass to point users towards events like concerts and plays.

Principals: Marko Balabanovic, head of innovation, and seven employees; the venture is backed by Travelocity and Sabre, which also have innovation-focused groups.

A sort of skunk works within its parent companies, Balabanovic's team experiments with new things as much as it builds, says the innovation head. This isn't to say its output is low; the group still builds mobile apps (Phone Fight brought light saber dueling to Nokia N95s) and web services (pronto.lastminute.com). "We're working on ways to provide much more relevant recommendations, based on what we're calling your megacontext, not just where you are right now, but also the time of day, the weather, whatever parts of your online world you're happy to plug-in," Balabanovic says. "We don't want to replicate the social networks, but we think our customers will expect us to be smart enough to make use of what's there. So maybe there's a band playing tomorrow, and we have a good deal on some tickets, and it's nearby, and from last.fm we can see it's a good match for you."

On brands stepping up in the mobile space:
Balabanovic: "I think it's about providing a great service that really works in the mobile context. We don't want people to have to go back home to print a confirmation email, or wait for a ticket to come in the post. With our restaurant deals, if you book via mobile, you just walk into the restaurant and tell them your name, that's it. That is a mobile experience that works." 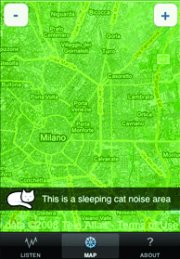 Apps/Success: WideNoise, a $1.99 app for the iPhone or iPod Touch, takes a sample of the ambient noise in your area from the microphone and adds it to a database of global noise levels. It can also be used to monitor decibel levels from around 2-114dB. One of the first apps developed as part of the Spime movement.

"About a year ago, we developers on the OpenSpime chat were brainstorming about something to show at the Frontiers of Interaction '08 conference," says developer Aaron Babele Brancotti. "We were thinking about something that could follow the social, useful way of the very first OpenSpime application, which was CO2 sensing. When somebody wrote about noise pollution, we realized every laptop has a microphone, so we wrote a small Python program called NoiseSpime, which was a proof of concept in distributed, large scale noise monitoring using the OpenSpime protocol. And when the iPhone arrived, some months later, the WideNoise was just the next step."

The path towards a spime-y software world isn't easy, though. "The necessity of analyzing and implementing the spime worldview in software is a complex task. We need a change in the way developers look at their objectives. The scalability, and high concurrency of the data collection and reporting needed are where the WideSpime implementation comes into play," says Ostinelli. "Having to deal with the limits of hardware, and entering in the multi-core paradigms, represent an important change in the way programmers approach their goals." The company has energy metering and musical projects in the works. 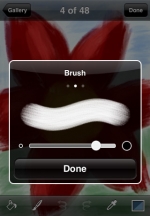 Apps/Success: Brushes. A $4.99 painting app for the iPhone that stretches the full touch capabilities of the interface, Brushes allows various brush sizes and textures for your finger paintings and allows pinching to zoom in and out of the canvas. Artist Jorge Colombo painted the June 1, 2009 cover of The New Yorker (below) with Brushes.

Steve Sprang, who's speaking at Creativity's technology event CaT this Wednesday, left Apple in March 2008?as the iPhone SDK went out into the world?with the desire to make an app, but not much of an idea. He'd worked at the software company for seven years, helping build the 2D graphics system and canvas user interfaces in Keynote, and figured the phone could use a color picker. "Once the color picker was working it seemed natural to do a painting app," Sprang says. "I had always wanted to write one and the touch screen was begging for it." Users responded, quickly filling the Flickr group "Brushes" with their creations. Sprang is working on the next Brushes update, as well as additional apps, potentially for Mac OS X as well as the iPhone. 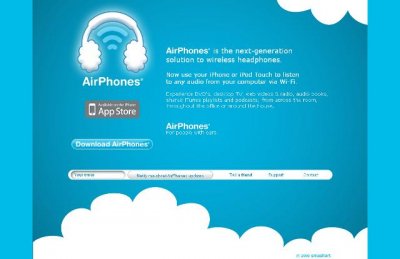 Principals: Chris Meyer, a photographer/printer turned interactive art director turned developer. AirPhones came about because Meyer wanted to be able to watch TV in bed while his girlfriend slept. "I don't have a real TV; I run my cable through my computer and use EyeTV as the hardware. It seems like there's a growing audience of people who use their computer the way I do. I really hate the aesthetic of a TV in the room, especially in a smaller space, and I figured I'm not alone. I think it's a similar mindset to those who have forgone their landlines for just a cell phone, minimize, downsize, consolidate. It was this simplicity that led to a simple idea. AirPhones ports the audio from your computer to your iPhone or iPod touch via a WiFi network. Essentially, AirPhones = wireless headphones."

On developing apps:
Meyer: "I've worked in Flash for years and have directed many Flash developers and multimedia projects. Because I'm not doing the programming myself, it was an obvious course to oversee the design and development of an app, it's very similar to directing any other multimedia project. You start with a vision and mold the project as it develops.

The thing I've learned from this process of developing an app is, it's expensive; every change, every request, every update costs money.

If you don't have the money to fund a project, it's time to learn iPhone SDK. The vast majority of apps won't make much money, so it's important to have a realistic view of your app's potential before diving in. One way to stay efficient on this front is to have a very detailed spec sheet to start. Every button, every movement, every feature should be presented like a storyboard, so there are no surprises?surprises are pricey."

Do the graphic design yourself or work with someone you trust. The people who can sling code like rock stars aren't necessarily the same people that should handle the design.

Finally, be daring, dream, have fun; nothing happens if you do nothing."