The Price Is Right (Isn't It?)

Ever since the first friend-of-a-friend proposed that the first web developer build him a site (for no money), the effort and cost associated with digitally driven creativity has been a misunderstood, and, sometimes, thorny issue. Unlike television commercial production, where there are some established cost parameters and you can typically see the budget on the screen, it's tough to price innovative web work.

Though comfortably out of the "Bro, can you make me a website?" phase, digital production pricing has yet to be standardized to the point where many outside of direct practitioners have a good understanding of what things cost, especially marketers and big agencies without a history of relationships with production companies. Conventional wisdom says that costs for interactive work are rising?but what's informing the increases and how does the industry determine where costs should be?

Commonly heard among digital production leaders is the We-did-it-cheap-back-then story, part of the pre-digital mythos. "I worked on Volkswagen from 1999 to 2004 for Tribal DDB," says Dave Bedwood, a creative partner at Lean Mean Fighting Machine, Cannes' Cyber Agency of the Year. "They were spending a million pounds on production on the floor above for the TV ad, whilst me and my partner were shooting videos ourselves on digital cameras."

Those days are quickly fading into history. The Interactive Advertising Bureau says internet advertising revenue is up 18.2% from the first quarter of 2007 to $5.8 billion. But what, if anything, does this mean for the relative outlay for the making of digital work?

At this point, it bears stating that interactive production does not lend itself to generalizations. The variation between different species of digital beast is broad. A Facebook application is different than a web game just as a big VFX spot is different than a lo-fi comedy gag. "The same way you can't compare the costs of a Sony 'Bravia' or a 'Happiness Factory' with a 'Mac vs PC,'" says PJ Pereira, founder and creative director at Pereira & O'Dell, "you can't compare the investment needed in a 'Get the Glass'with an 'Elf Yourself.' And that has nothing to do with the quality of the idea or even the return it will bring, just the complexity it takes to produce it."

Coke "Happiness Factory, The Movie"
But while prices vary with the nature and scope of the work, digital projects generally have larger budgets now, and with them a greater demand for expertise. For Lean Mean's "Non Stop Fernando" site for Emirates [nonstopfernando.com], Bedwood says "we actually did a proper casting, found a proper actor and had a real TV production company and director film and produce it." So, according to Bedwood, audience expectations rise, budgets rise, the level of craftsmanship involved goes up, and, eventually, you have equality between the online and off.

Dollars sense
But there are no ready standards for these newly significant budgets. Unfortunately, a lack of media buy is often equated with lack of production money. The loose 10-15% standard, where that percentage of the media spend is put into production, is disregarded. "Clients still have trouble understanding interactive can be just as expensive as executing a TV spot, just without having the media spend," says Paul Collins, interactive creative director at Swedish agency ?kestam.Holst.

Rick Webb, COO of the Barbarian Group, thinks the lack of a media buy on the bulk of digital production work makes it difficult for agencies to justify their costs and markup on the production part of the job. "[Agencies] have a strong incentive to maintain opacity here and mark up the digital production," Webb says. "One other factor that is unfortunate for marketers' best interests is that the bulk of their 10-20% increase in interactive spend per year is controlled by their media company, who have no interest whatsoever in increasing digital production budgets. They just funnel it to [digital services providers] and get better buying power, perks, and more markup profits."

There are ways, however, to channel needed funds into production, according to Bob Mackintosh, interactive director at Syndey agency Host. "We seem to be able to snaffle more production dollars from a media budget when the idea is positioned as a 'media idea,'" says Mackintosh. "Some viral content comes into this category." 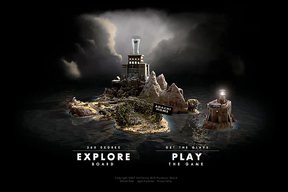 Milk " Get The Glass" Site
Frequently, budgeting is a straightforward matter, based on an initial eyeballing of the brief.

"Often, based on experience, we say Yeah that's about a $xxxk job," Mackintosh says. "Once we have a proper idea of the concept we scope it out, work with all people involved and work up a solid estimate from there." But another major factor in the variation in online pricing is innovation. "With every campaign we're trying to do something new," Mackintosh says. "This makes it hard to scope as there's often no benchmark."

The difficulty in pricing projects heavy on innovation is only matched by most companies' willingness to take them on, making for unreasonable budgets but positive PR and, maybe, awards. "You pay a high price for being the first to do something," says Alessandra Lariu, who recently arrived at McCann, New York as digital group creative director by way of AKQA. Like traditional production companies, which will often work to a net financial loss on jobs they know will carry awards weight, some digital companies are willing to take a flyer on especially innovative projects. "The money comes back in later on as a result of the PR awards generate," Lariu says.

Agencies have to be careful, though, of dangling projects in front of production companies and then playing the innovation card as leverage against a tiny budget. One agency head of interactive production says some agencies "burn through vendors" using just these tactics. "The competition for quality creative is fierce," says Webb. "Finding the next 'wow' factor is vital. The easy technical gimmicks have been done. Effective, clutter-breaking creative often, though not always, obviously, requires a more ambitious undertaking." 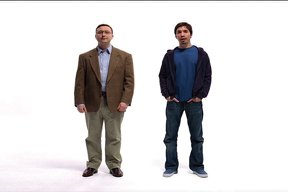 Apple "Get A Mac" spot
Still, Webb insists he doesn't think anyone's getting unduly rich at small, creative shops?including his own?just yet. "Costs, in terms of high profitability for great interactive work, say, akin to [film work at] Anonymous or @Radical, are nowhere near where they should be. Incentives aren't aligned there yet. A big interactive hit doesn't allow you to immediately substantially raise your rates."

With marketers mandating agencies to justify costs, Webb says the result is a heated pitch process for interactive shops. "It's not uncommon to be in a five- or six-way pitch with other SoDA type agencies," he says (SoDA is the Society of Digital Agencies, established earlier this year to foster best practices in this space). "And you might be the greatest thing in the world, but 90% of your chance of winning that pitch is still going to be your price. Agencies are so scarred by their own pitch process they impose it on the SoDA type agencies doubly so, for miniscule budgets. Six-way pitches for $200k? Really?"

Among the agency producers assigning the work and bringing together production partners, there's a strong sense of which company will come in at what number. Several of the interactive EPs we spoke to at large agencies had fundamental ideas about what different shops would charge for specific pieces of work. Watch out, they cautioned, because if you aren't sure going in what things should cost, you're likely to overpay.

And, as with nearly everything, there's room for negotiation. The top production companies retain a high level of cachet, and can afford to be choosier. "The top dogs can pick their projects and be tough in their negotiations, knowing there's a line of agencies waiting to get in," says Anders Gustafsson, senior creative at Sweden's Daddy. "As traditional agencies get better at digital, this will change."

And newer, faster and younger companies will always be arriving. "There are always young Turks that will take a job for almost nothing," Webb says. "The talent pool is growing as schools like RIT get better at cranking out the kids, so this is a consistent issue." Webb says. But instead of having to constantly worry about being underbid on projects by garage shops, Webb maintains there are some cost advantages to being a well know shop. "Our costs per hour of average employees in certain roles have actually gone down in the last few years," says Webb. "If you have a boring place to work, you have to pay a lot to keep people there, so perversely a lot of the middling work is actually more expensive to produce than the awesome work." 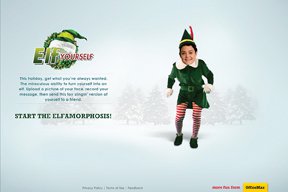 Office Max "Elf Yourself" site
Business as usual?
Standards, a byword on the lips of anyone who's been on the wrong end of a bad deal (and that's almost anyone doing digital production), seem to be slowly developing among the production community, at least in an informal sense. Webb doesn't think formal standards are necessary, but rather terms of engagement, such as those offered to traditional production companies through the AICP. Many of these involve transparency, on issues like out-of-pocket costs, travel policies and payment terms. "[There should be] clarity on work-for-hire and attribution and award shows and staff poaching," Webb says.

According to Gustafsson, the standards discussion in his native country is bringing together myriad different operators under the banner of the Swedish Advertising Association's Digital Group. "The need for it varies, since we've got traditional agencies with digital competence (likeForsman & Bodenfors andDDB Stockholm), creative digital agencies with their own clients (such as Daddy and Farfar) and digital production companies (Perfect Fools, North Kingdom) within the association. I think we'll see some sort of recommended agreement template for digital productions shortly, similar to the ones recommended by the association in traditional media today." Six months into its formal association, SoDA doesn't have standards or pricing guidelines on its immediate agenda, according to chairman Richard Lent, CEO of AgencyNet. Lent's own shop builds its own pricing models based on a logging widget employees engage when they're working.

Where will all this lead? Well, it's probably safe to theorize basic economic principles will continue to guide what things cost in the digital space, until, of course, an AICP-like body begins to look seriously at setting guidelines around contentious areas. Looking forward, it's conceivable on- and off-line production may reach parity. "At some point, the investment that you need to make to have A-Class digital stars such as The Barbarian Group or North Kingdom will get close to what you can pay to a director like Spike Jonze," Pereira says. "I wonder if that will mean that one day we will see people like (A-list Flash artist) Erik Natzke working directly with Michel Gondry to produce cross media content?if the prices continue to rise, this day may be about to arrive." And when it does, says Pereira, "when production becomes cross media and prices to create TV and digital pieces are equivalent, I'd be pretty curious to see if the hot digital directors will join the big video production groups or the other way around."