Costumed heroes as rapists. Caped crusaders who can't even get it up. A comic within a comic. A morally perplexing finale. Such is the stuff that helped to make Alan Moore's critically acclaimed graphic novel Watchmen a beloved cult classic—but that also made it virtually unadaptable to the big screen. Until now, that is.

After back to back successes in the critics' corner and at the box office on the remake of Dawn of the Dead and 300, director Zack Snyder achieved the near impossible when his cinematic realization of Watchmen hit theaters in wide release on March 6, albeit without Moore's seal of approval. Over the last two decades, the script had seen multiple revisions and failed to make it to film, even at the hands of respected directors like Terry Gilliam, Darren Aronofsky and Paul Greengrass. Two and a half years ago, however, after the blockbuster success of 300, it landed on the desk of Snyder, an avid comic book reader and fan of the graphic novel. "It was weird when I got the call from the studio," says Snyder, who is also repped out of Believe Media for commercials. "They said, 'We have this script for a thing called Watchmen. We think it's based on a graphic novel.' Which for me is like saying, 'We have this thing called Moby Dick. We think it's based on a book.' It was a big deal."

Zack Snyder
Snyder's first instinct was to turn the job down—to any devotee of the original source material, this was heady stuff only meant to be served up in comic book form. But the thought of Watchmen coming out a sanitized superhero actioner was too much for him to bear. The original story is set in Cold War-era U.S and revolves around the lives of has-been heroes who possess no superhuman powers (with the exception of one, Dr. Manhattan) and grapple with some very human personal problems, as well as the looming threat of nuclear oblivion. Yet the script that got to Snyder transformed the tale into a PG-13 piece of fluff, "two hours long, updated to the war on terror, taking place in modern time, and the [villain's] plot is foiled at the end, which kind of misses the point," he says. "My biggest fear was that they would just film the movie that they gave me, that they would just go, 'OK, thanks anyway' and go down the street to who knows who."

Bringing the story back to its original themes "was the work I did," says Snyder, who teamed with writer Alex Tse to revise the script. The official theater version clocks in at over two and a half hours, bears an R-rating and features a violent rape scene, frequent full frontal male nudity (in the bright blue form of Dr. Manhattan) and an ending that won't leave viewers breathing a sigh of relief. Bringing it closer to home was a matter of delicate diplomacy. "If I'd pitched the movie that I shot to them, from scratch, it [would be] a non-starter," Snyder says. "It was just one of those things that I chipped away at."

For Snyder, the process of making the film was a balancing act between preserving the integrity of Moore's vision while remaining true to his own experience of the story. "Anytime you make a movie of a book, regardless of what that book is—whether it's Sense and Sensibility, Shakespeare or Watchmen, I feel there's a huge obligation to what the writer did," he says. "It's about identifying with the philosophical point of view of the book as much as you can, and then trying to get that feeling in the movie. My main objective was I wanted the movie to feel like how I felt when I first read the graphic novel. I wanted viewers to feel that mix of confusion and elation. [Watchmen] sort of messed with my perception of what I thought that genre was about, and there was a particular sort of mood that the book had. Those are the things I really was after."

By many counts, the final movie is uncannily faithful to the original. Many scenes and details appear to be pulled directly from the frames of Watchmen artist Dave Gibbons—who, unlike Moore, has been a very public supporter of the film. But Snyder himself painstakingly storyboarded each shot, reconfiguring Gibbons' original vertical panes into movie-friendly horizontal tableaux (See right).

That said, Watchmen diehards will still have plenty to complain about: the extra story layers—manifested in a comic within the comic Tales of The Black Freighter, and an in-book autobiography of the original Nite Owl, Under the Hood—are absent from the film. Perhaps one of the biggest disappointments will be the ending—we won't spoil it here—but there's a significant revision to the cataclysmic disaster that occurs toward the story's close. Many of the missing elements promise to be addressed on the Ultimate Cut DVD. Set for fall release, it will feature an animated Freighter film and an Under the Hood documentary, as well as Snyder's three-hour director's cut.

Reviews have been wildly divergent—the Chicago Sun-Times' Roger Ebert calls the film "another bold exercise in the liberation of the superhero movie," while The New Yorker's Anthony Lane says Snyder "has conjured a work that forgets to entertain but somehow manages to bore, bewilder and disgust." The box office jury is still out—its first weekend the film had the biggest open of 2009, topping $55 million, but not matching 300's opening weekend draw of more than $70 million.

If things do go right for Watchmen, Snyder will be three for three in the film world, a rarity even in the league of extraordinary commercials-turned-film directors. "I just feel like I've been lucky and I've had good material," Snyder says. "I've always been a comic book geek and in some ways, pop culture has caught up with the things that I like, so that's fortunate." It also helps that Snyder believes he's been able to keep things small production-wise on each of his films. "I didn't feel that 300 was any bigger than Dawn of the Dead. And when we made Watchmen it didn't feel any bigger than those films. We made it in the exact same sort of boutique-y style that we made those other two movies. My wife Debbie is my producer. Wes [Coller], my other producer has been with me forever. Larry Fong, who shot it, went to Art Center with me and Billy Hoy has edited all the movies I've done. We don't feel like it's this epic thing. It really just feels like it's a small group. I don't know if that's the secret, but I do know that's the attitude difference. I don't feel like I give it over to [the studios]. I have them come to us." 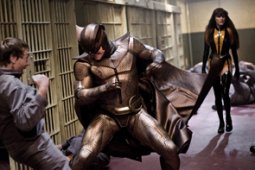 On Patrick Wilson as Nite Owl II aka Dan Dreiberg:
"Patrick Wilson was the first set cast member. What's cool about Patrick is he does set the tone a little bit. He's so Dan-ish to me, it's just awesome."

On Jackie Earle Haley as Rorschach:
"Jackie got in the movie because he sent me a DVD of a scene had had shot in his living room, with him being interrogated by the psychiatrist with the flashback to him getting arrested by the police. He had a crazy sock on his face. It wasn't a perfect version of a Rorschachian costume. There was a very raw quality to it all, but [after that] I was like, there's no other actor that could be Rorschach."

On Billy Crudup as Dr. Manhattan:
"People have said to me that there are things the graphic novel can do that a movie can never do. I'm like OK, that's fair, but by the way, there are things that a movie can do that the graphic novel can never do. That's what Billy does. He makes Dr. Manhattan into a person. He's just a sad god. When he says in the movie, 'I can change almost anything, but I can't change human nature,' it's sad. When he says it in the novel, it's more philosophy. That's one of those things that happens after you see the movie. You're like, Wow, I didn't know that that's what we were doing, but in the end it turns out to be one of the most important things, I think."

On translating Dave Gibbons' art to the screen:
"It's surprising. Even though this is like a 'Dave' frame, I'd still have to rejig it for the movie to make it work. Most of Dave's frames are vertical, and all the movie frames are horizontal. A lot of people say, 'Oh you really didn't do anything, you just shot the frame.' I get why you'd say that, but the truth is, it's like you have a classic car with no engine. You love the chassis and everything's great about it, but it just doesn't run. So that was the challenge for me. The bulk of the work that I did was having to repurpose the frames so that they worked for the movie for me."