READ THIS NEXT
How restaurant chains are duking it out to be the best in their categories
Markpellington and Catherine Owens' U23D, edited by Blue Rock's Oliver Wicki
Credit:

Courtney Hunt's Frozen River captured this year's Grand Jury Prize for dramatic feature, but spot makers loomed large at the 2008 Sundance Festival. Perhaps none so large as Mark Pellington, who debuted his feature Henry Poole is Here, and, with Catherine Owens, directed the outsized rock spectacle U23D. Blue Rock's Olivier Wicki edited the film, which translates the band's live performances into eye popping 3D. Among the other spot directors whose work stood out at the fest: Noam Murro, who had his feature debut with Smart People; RSA's Johan Renck who directed Downloading Nancy; Nexus Productions' Chris Waitt with A Complete History of My Sexual Failures; and Rawson Thurber, who directed The Mysteries of Pittsburgh. Partizan's Michel Gondry debuted his much anticipated Be Kind Rewind and the company, along with New Line, hosted a "swedeing" suite in Park City, where revelers could come and customize their BKR party passes. BKR DP Ellen Kuras had her own buzzed about film in the fest?the documentary Nerakhoon. 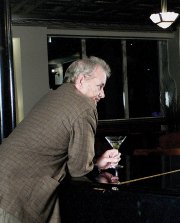 Dan Beers' FCU: Fact Checkers Unit
Adland's finest also shone in the shorts programs. Smuggler's Randy Krallman charmed audiences (and Isabella Rossellini, who surprised with a delightful, quirky series of short shorts on bug sex, in which she played the various impassioned insects) with his Force1TD for Ebay. Chelsea Pictures' Lauren Greenfield fielded her documentary Kids + Money; Moxie's entry was FCU: Fact Checkers Unit, the Dan Beer-directed Bill Murray starrer that had attracted attention on Funnyordie.com; Bob Industries' Spencer Susser had a love story/zombie flick combo in I Love Sarah Jane; and The Vikings out of Paranoid got an honorable mention nod for their W, based on the awardwinning Epuron "Wind" spot. In other awards highlights, music shop Comma got in on the Special Jury Prize winning Anywhere, USA with its work on the film's music and FilmCore Editor Jinx Godfrey worked on the World Cinema Jury Prize winner Man on Wire. There were several knock-out shorts among the non-industry entries, including Chief, from Hawaii's Brett Wagner, about a displaced Samoan tribal leader; August 15, from China's Xuan Jiang; and Wrestling, from Iceland's Grimur Hakonarson, a story about forbidden love among countryside wrestlers.

Spencer Susser's I Love Sarah Jane
Sundance also brought together a range of experimental filmmakers and artists in its New Frontier series. Among the New Frontier artists were Hasan Elahi, whose "Tracking Transience" is a database of information on the artist's every move over six months: Elahi had been the subject of a bogus FBI inquiry, so he decided to provide an online window into the minutiae of his life to make it easy on (and to make political commentary on) the bureau. The NF program also included a multimedia presentation called "Terra Nova" from Paul (DJ Spooky) Miller; an installation called "Invisible Threads" by Stephanie Rothenburg and Jeff Crouse wherein visitors could design clothing in Second Life and then have it rendered live; and screenings of Doug Aitken's Sleepwalkers.


To discuss this article, visit the Creativity Forums.