Adidas Gains on Nike in China By Balancing Performance With Fashion

Sports brands may be going strong in the U.S., but in China market leader Nike is expecting sales to fall in the next two quarters, marking five straight quarters of declining revenue there. Local brands are similarly slumping. 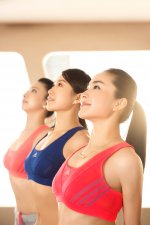 Adidas, however, is bucking the trend. The company is gaining on Nike's top spot, reporting 6% revenue growth in Greater China in the first quarter of 2013, following 15% growth there in 2012. Analysts credit Adidas fashion apparel like high-heeled sneakers coming from sub-brands such as Originals, NEO and Y-3.

Jens Meyer, VP-marketing, sport performance for Adidas China, said that's just part of the story. It's true that fast-fashion retailers like H&M and Zara are grabbing sales, and Chinese consumers don't play as much sports as their Western counterparts. But he said its success comes from striking a balance between fashion-forward appeal and staying true to its roots. "The challenge for us is 'How do I, as a sports brand, capture a part of the leisure market without compromising my positioning in sport?" Mr. Meyer said. "If we move too much into the fashion side ... the consumer will say 'I don't see Adidas anymore as a sports brand, I'll go to others who just do sport.'"

Largely ignored
A key part of its strategy is targeting women, an influential group that has been largely ignored by sports brands. There's great potential in grabbing the "unoccupied mindspace," Mr. Meyer said. "There's no Lululemon in China."

To start, the Adidas China team made strategic tweaks to the global "All in for My Girls" marketing platform, choosing as campaign ambassador Taiwanese pop star Hebe, who is stick-thin, as are the other women featured in the visuals. It was a deliberate choice reflecting Asian ideals of beauty. There isn't a drop of sweat visible as cute, smiling women rock climb, dance and hang out in the gym. It's a stark difference from the way sports are marketed in the West, often with sweat and six-packs.

Adidas' target audience in China "were doing sport with a desire to do it together with their girlfriends ... they wanted to laugh and have fun," Mr. Meyer said. "Sport was as much about going to the gym as the coffee afterward." Adidas notched 40% growth in its women's business in China after the "All in for My Girls" campaign launched in March.

No gym intimidation
Online, Adidas has featured female sports groups from across China. It invested heavily in TV, with an ad showing Chinese women running, dancing and doing parkour.

It's a smart strategy, said Ben Cavender, associate principal at China Market Research Group. Featuring nontraditional activities like dance and badminton, which can be done in small groups, helps connect with less sporty consumers who may feel intimidated at a gym.

Nike's marketing in China, meanwhile, remains driven by sports stars like LeBron James and Kobe Bryant. Messaging highlights the technical performance of Nike products, which consumers find to be cool, but "there's no emotional connection for them," Mr. Cavender said. "They're failing to grab people's interest on a more visceral level."

Marathon, not sprint
Nike had a 12.1% market share in China in 2012, up half a percent from 2011, according to Euromonitor. Adidas trailed slightly at 11.2%, up from 9.6% a year earlier. Local brands with declining market share include Li-Ning, Anta and 361 Degrees. Nike has struggled with excess inventory in China, forcing discounts that have affected the bottom line.

"As our President-CEO Mark Parker has previously stated, the race in China is a marathon, not a sprint. We have a good track record of making adjustments and turning things around," Nike spokeswoman Jeanne Huang said in an email. "We are fully committed to our strategy in this market: to drive long-term sustainable and profitable growth."

Adidas notched 40% growth in its women's business in China after the "All in For My Girls" campaign launched in March 2013, and Mr. Meyer noted it did not come at the expense of its men's business. The campaign was so successful in China that it's the only market where Adidas will invest in TV for next year's installment, while the company globally focuses on the soccer World Cup.