CHICAGO (AdAge.com) -- How's this for a global marketing strategy? Each month target a different international market with an ad that offends some segment of the population, then, after earning a lot of media attention, apologize and pull the ad. 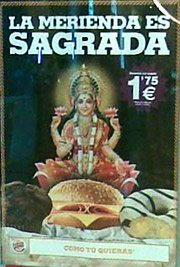 Burger King has removed the in-store advertisement that has offended some.

That's the pattern of offense Burger King has established in the past few months. Most recently, the fast feeder had cultural and religious groups screaming today in the latest installment of what has become a series of monthly melees. A few hours after an ABC News reported that ads in Spain depicted the Hindu goddess Lakshmi atop a ham sandwich -- with the caption "a snack that is sacred" -- Burger King announced that it would pull the ads. Many Hindus are, of course, vegetarian.

According to the statement: "Burger King Corporation values and respects all of its guests as well as the communities we serve. This in-store advertisement was running to support a limited-time-only local promotion for three restaurants in Spain and was not intended to offend anyone. Out of respect for the Hindu community, the in-store advertisement has been removed from the restaurants."

Spokeswoman Denise Wilson added that the work was done by a "locally based Spain agency" and not U.S. agency of record Crispin Porter & Bogusky. She did not identify the shop (Crispin is Burger King's agency of record for broadcast advertising in Spain and some other global markets, but a range of other agencies are said to be brought in to handle print, digital and other executions), but another person familiar with the situation identified the maker of the ad as JWT-Delvico, which has offices in Madrid and Barcelona. JWT referred calls to Burger King.

This has all become familiar. In April, Burger King pulled and said it would revise a European TV spot for its Texican Whopper that had proved offensive to Hispanics. In it a small, masked wrestler draped in a Mexican flag was carried around by a tall gent in jeans and a cowboy hat. Parents expressed dismay in the chain's online promotion of "Star Trek" in May, in which the chain's iconic King character kicked a succession of people in the crotch. Last month brought "The 7-incher," a promotion in Singapore for a long, fat burger that was sure to "blow your mind away." A woman's head with an awed, open mouth accompanied the picture of the sandwich.

Burger King's statement at the time carried the same refrain: "Burger King Corporation values and respects all of its guests. This advertisement is running to support a limited promotion in the Singapore market and is not running in the U.S. or any other markets. It was produced by a locally based Singapore agency and not by BKC's U.S. advertising agency of record, Crispin Porter & Bogusky."

Predictable pattern
While Burger King isn't new to edgy ads, the pattern of offense, advertising retractions and free media has become predictable, and more frequent. It's easy to assume that it was planned: Particularly "edgy" work is sent abroad with the expectation that it will soon reverberate on American soil, accompanied by lots and lots of news coverage. The repeated denials regarding Crispin's involvement also raise suspicions that the work was done under the agency's guidance. Not so, said Burger King spokeswoman Katie Boylan, who declined to elaborate beyond the original statement but underscored that "CPB did not work on this campaign, and it is not a part of a larger strategy."

But the tide may be turning on this kind of advertising. Several Burger King franchisees have said sales have "fallen off a cliff" since late March, following the chain's "Whopper Virgins" taste test among far-flung indigenous populations and the subsequent Texican Whopper ads. Several said the ads appeared to have alienated Hispanic customers, who tend to "overindex in the category."

Burger King has also struggled with its value perception, and seems to be playing catch-up with McDonald's. But it may be on the verge of taking drastic action. According to a Dow Jones report this afternoon, franchisees are voting on a possible $1 double cheeseburger to hit stores later this summer. The chain tested a dollar double cheeseburger in 2007, but pulled the test before the sandwich could be rolled out nationwide because it wasn't profitable.