HONG KONG (AdAge.com) -- The Chinese elevated enthusiastic group buying for everything from cars to clothes to an art form long before sites like Groupon existed. Despite rapid international expansion, the U.S. daily deal site hasn't opened in China yet, but about 1,200 Groupon clones have. 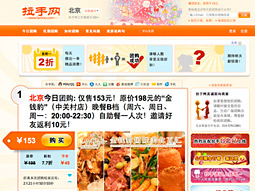 Groupon clone Lashou.com operates in more than 100 cities around China.
Years ago Chinese internet users started getting together online to organize as a group to buy the same car from the same dealer in order to get a discount, and this team-buying concept quickly spread to other categories like computers. A group leader would coordinate the group's requirements and bargain with prospective dealers to close the sale. In fact, two years ago a group of Ford Focus buyers got into a shoving match at a Ford dealership when employees reportedly reneged on the agreed price, and the prospective buyers uploaded footage of the melee to video sites.

Since then group buying has soared. About 10 million Chinese used Groupon-like sites in October 2010, up from just 5 million in July, according to iResearch Consulting Group.

Baidu, China's most popular search engine, launched a beta version of a coupon site called Youa Tuangou (or "group buy") in Beijing in early December. Merchants will also be able to offer their own discounted deals to be promoted on the site, without waiting in line to become one of the daily deals. Web portal Sina started a group-buying site in July, and Tencent, parent of the popular QQ instant messaging service, now has one, too. 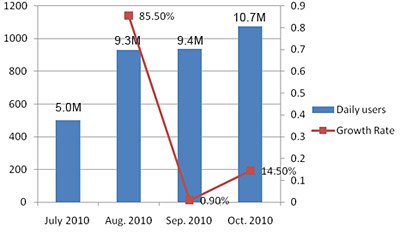 Monthly consumer coverage of China's Groupon-type sites from July-October 2010 (The red line represents monthly growth rate and the blue bars represent the total number of users of Groupon sites in China.)
"As internet powerhouses like QQ.com and Sina join the discount craze, there will surely be more consolidation in the next year or two," said Vincent Lee, a digital strategist at Edelman in Beijing. "The market volume is expected to stand at $150 million in 2010 and double in the coming year."

The Chinese media reported in October that Groupon execs came to China to meet with successful Groupon clones, including Lashou.com, which operates in more than 100 cities, and Meituan.com, which is in Beijing, Shanghai and Wuhan, but no deal has been closed. (Check back for the next two stories in Ad Age's three-part stories on group-buying trends in Latin America, Europe and Asia).

Chinese car maker Geely, the new owner of Volvo, is the first car maker to take a spot in Alibaba Corp.'s online Taobao Mall, and will begin selling Panda models through a group-buying system next week. The Panda, a small car popular among young office workers, will be available on Taobao in a special two-color model created for online customers. Customers pay a $43 deposit online, and then head to a dealership to do a test drive and buy the car. Geely plans to offer some car models exclusively online in the future. 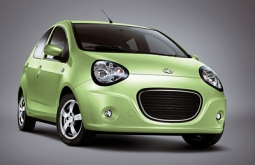 Geely Panda
In an earlier deal in September, Mercedes-Benz sold 205 smart cars in three hours in one of China's largest online group purchases to date. Consumers vied to buy the cars normally priced at $26,303. At 50 buyers, the price tag dropped to $24,958, and at 200, the price plunged to $20,825.

The Chinese government is vigilant in blocking popular U.S. social-networking brands such as Facebook and Twitter from penetrating China's firewall, but doesn't appear concerned about coupon sites, which may be a good omen for Groupon.

"[Group buying sites] allow price-sensitive Chinese netizens -- 55% of whom earn less than $225 per month -- to purchase products and services at much lower prices via a simple but effective coupon mechanism," Mr. Lee said.

Asia only accounts for 2.3% of Groupon's global traffic now, but that's likely to grow fast since Groupon last month snapped up daily deal sites in three Asian capitals with small but sophisticated populations: Singapore, Hong Kong and Taiwan. Singapore's Beeconomic, Hong Kong's uBuyiBuy and Taiwan's Atlaspost will change their URLs to Groupon addresses in early 2011. (The Beeconomic deal will also take Groupon into the Philippines, where there has been little activity in the daily deal space).

Vincent Lee
"Since most Asian countries are communitarian, the Groupon model seems to be built to suit and evolve in most of our markets," said Scott Silverman, regional director for Asia at Godfrey Q and Partners, based in Beijing and Singapore. Groupon combines "social networks with the just-in-time nature of mobile communications -- opting in for deals to hit you at designated times, when you're open for mobile-driven promotions [for products like] food, nightlife and consumer electronics."

But Groupon will have to contend with clones, and in Singapore, "there are two getting a fair amount of buzz," Mr. Silverman said, referring to Hungry Deals and Deal.com.

In fact, Singapore is so clogged with daily-deal sites that All Deals Asia is attempting to aggregate sites from around the region.

For major growth, though, Groupon will have to enter the biggest Asian markets like China and India. India's Groupon clones include Delhi-based MyDala and Snatch Deals, both offering deep discounts on restaurants, spas, salon, and other services.

In Japan, the conventional wisdom used to be that Japanese preferred quality and service to discounts. Today Japan has 178 sites similar to Groupon, said Shiho Oura, a planner at Adex Nihon Keizai Advertising Co./ICOM in Tokyo. That includes Groupon itself, which bought three-month-old Qpod in August.

Japan's group-buying frenzy kicked off with the launch of Piku in April, followed by Ponpare in July. Owned by a local company called Recruit, which already distributes 5.5 million copies of free-coupon magazine Hot Pepper a month, Ponpare is the most high profile site, known for ambitious offers like scoops of Haagen-Dazs ice cream for $1.25 if 500,000 people signed up. With too many daily deal sites for customers to keep up with, some are picking one category to focus on like beauty or food, Mr. Oura said.

Elsewhere in Asia, Australia is home to JumpOnIt. Thailand's Ensogo.com is growing fast and boasts 10,000 Facebook fans. Malaysia saw a wave of launches in October, including Roonchit, Groupego, and Wow Deal, but Tim Saw, client service director at Krakatua/ICOM in Kuala Lumpur, said "Most of our consumers are not really into the online purchasing model yet."