Bartle Bogle Hegarty is jumping into online gaming, creating a venture that connects its Chupa Chups client with game developers to help the brand leverage the interactivity and stickiness of social networks.

"The brand philosophy of Chupa Chups is all about giving youth a respite from the seriousness of everyday life, similar to the role gaming plays in our target audience's life," Corrado Bianchi, international marketing director of Chupa Chups' Italian parent company, Perfetti Van Melle, said in an interview by email with Ad Age .

"Gaming is the single biggest source of entertainment for our target audience -- they spend more time playing games on Facebook and mobile than any other demographic," Mr. Bianchi said. Being where our audience is is obviously key. But especially when it concerns youth, ensuring we engage with them on their terms is even more important, which is where gaming, done right, comes into the picture."

It's not new for ad agencies to create online games, but the costs of producing quality games are high and the titles must be managed and optimized to remain successful, said John Hadfield, CEO of BBH Asia Pacific. 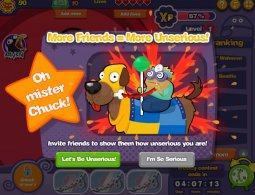 "There's a lot of [gaming] stuff produced by agencies that isn't very good," he said. "The mentality of a campaign from an agency point of view is one hit: done, walk away, on to the next. [Gaming] doesn't fit that approach."

The Chuck Studios business model aims to make social-game publishing profitable for all parties. It does not employ game developers directly but rather provides its developer partners with seed funding and use of the Chupa Chups' IP . Meanwhile, the game developers can access the brand's global online fan base and marketing support.

A portion of the game's revenue must go to the social platform, while Chuck Studios and the developers split the remainder, Mr. Hadfield said. He would not provide specifics on the breakdown.

"Social gaming is very competitive and very cluttered. It's also expensive; the set-up costs are normally quite high. You need to engage specialists, but a lot of people don't," Mr. Hadfield said. "If you don't get it right it can backfire."

"Chupa Chucker" was developed by U.K.- and Argentina-based Atommica. Until now, Chuck Studios has been finding its developer partners informally, mainly through a team member who has a social-gaming background.

Chuck Studios is based at BBH Asia Pacific in Singapore, which handles the global Chupa Chups account. It works solely for Chupa Chups, but the agency would set up similar businesses for other interested clients using the same model, Mr. Hadfield said.

Chuck Studio's second game is scheduled to launch in two to three months.

"Being top-of -mind for our target audience will ensure that Chupa Chups is the first product they reach for at the counter of a convenience store or supermarket," Mr. Bianchi said. "The role of Chuck Studio's games is ultimately to help us drive brand preference and build even more loyalty among our fans, by doing this on their terms through activities that they enjoy."