When U.S. Papers Sought New Readers (and Revenue) on the Mainland, Things Didn't Go Exactly as Planned
READ THIS NEXT
Dispatches from the panicked GDPR frontline
The New York Times' Chinese-language site
Credit:

In 2012, the New York Times hired 30 employees for a Chinese-language news website to appeal to the growing class of "educated, affluent, global citizens" in China – not to mention, to luxury advertisers eager to target that demographic.

Four months later, the paper's Chinese- and English- language sites went dark in China. Since then, neither news site has been viewable by China's masses.

Yet the edition is still well-staffed and publishing every day, and it just featured an array of stories on a topic that state media can't touch: June 4's 25th anniversary of the Tiananmen Square crackdown.

The Wall Street Journal has a China-facing online edition too, launched way back in 2002. In the days leading to the Tiananmen anniversary this month, both its English and Chinese editions were blocked, and it's not clear how long the stoppage might last.

As Western media giants struggle to find new ways to pay for reporting in the internet age, China has at times seemed like a land of opportunity. And though Silicon Valley social media sites including Twitter, Facebook and YouTube have been blocked for years, it's been tempting to hope things would work out better for China-facing news ventures.

When The New York Times' Chinese version launched in June 2012, the paper's Media Decoder blog noted that it had already attracted advertisers including Bloomingdale's, Salvatore Ferragamo and Cartier.

But how do you sell ads after your main audience disappears? Lately, the ad turning up on the cn.nytimes.com homepage is a house ad for an app.

Some similar ventures are visible now (even if most have run into issues in the past). The Financial Times and its China-facing product are accessible, as is Reuters and its Chinese-language site.

The government never explains why some sites suddenly vanish – sometimes it's apparent a sensitive story angered the powers that be, while other times it's a mystery.

Savvy internet users in the mainland use virtual private networks (VPNs) to circumnavigate the Great Firewall. It's unclear, though, how many Chinese users bother with them, especially because China has cracked down on VPNs, and people often have to switch between different ones to get a decent connection.

Peter M. Herford, a former journalism professor at China's Shantou University and former VP of the CBS news division, said people who need or want information manage to share it.

Email, chat, microblogs and popular messaging app WeChat, "create distribution systems that the government, try as it does, cannot lock off," he said.

It's hard to gauge the impact Western news sites have on China's population.

But The Wall Street Journal and New York Times and their Chinese-language editions are certainly "important to the central government leadership," Mr. Herford said. "These and other sources are their way of taking the pulse of what the world knows and sees of China."

After The Wall Street Journal's Chinese site was blocked May 31, and the English version joined it two days later, there was little apparent chatter about it on social media (it was probably overshadowed by news that Google access has been heavily disrupted as well. ) One microblogger noted that the Journal has been reporting on Chinese economic problems and wondered, "Is that one of the reasons it was blocked?" The site has run into firewall issues before. 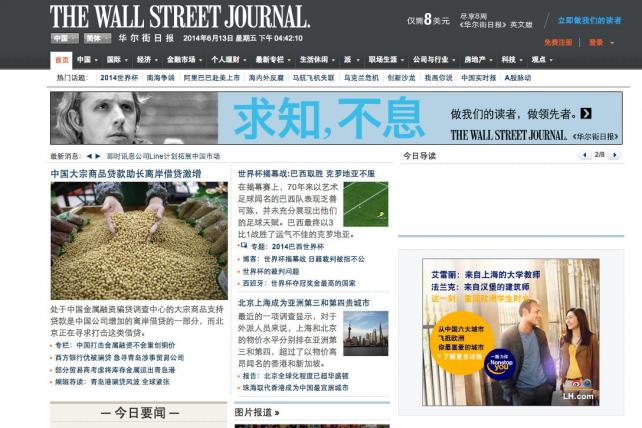 A spokeswoman for Dow Jones & Co., which publishes the Journal, confirmed the new blockage but declined to answer other questions.

In February, as the company announced a new senior leadership team for the venture, it listed off successes: 4 million Weibo microblog followers between the paper and the top editor, a successful video brand and an awards program for Chinese innovators. (Both the Times and Journal release little information on how their Chinese sites are performing financially.)

The Times of China

The New York Times' China blockage followed its Pulitzer Prize-winning investigation into the fortune amassed by family members of then-Prime Minister Wen Jiabao. (Bloomberg had similarly important articles on China's elite and has been blocked as well; more recently it shelved a big investigation, and its chairman raised concerns about jeopardizing sales of its financial terminals in China.)

The Times coverage of China has continued to be hard-hitting. Its Chinese-language news site is mostly articles translated from English, with some original reports as well. After it went dark on the mainland, the paper launched an upscale Chinese-language online lifestyle publication modeled on the Times' T magazine. The hope was that covering non-controversial topics would spare it, but it got blocked too.

A message you get within China if you try to access a blocked news site.

Asked about the Chinese version's original staff of 30, mostly translators and editors, Times spokeswoman Eileen Murphy said that though some employees had left for other positions, "the relative size of our operation in China remains largely unchanged."

For the Times, are the Chinese-language offerings still worth it? Ms. Murphy said the company remains very committed to China.

But "like most of our other initiatives, we continue to review and evaluate our Chinese-language sites, and we continue to work with the Chinese government to open access to Times journalism in mainland China," she wrote in an email. "We're clear, however, that the one thing we are unwilling to compromise on is our journalism."