'Made in China' Brand Selling $85 T-Shirts to Americans

Bosideng Has Thousands of Shops in China; Can It Build Its Brand in the U.S.?
READ THIS NEXT
Dispatches from the panicked GDPR frontline
Bosideng is betting American men want upscale fashion from a Chinese brand.
Credit: Bosideng

When Chinese brand Bosideng launched its first shop outside China in 2012 with a U.K. menswear boutique, the logo read "Bosideng London." It seemed the label was downplaying its Chinese heritage instead of announcing it with pride.

As Bosideng takes its upscale men's lifestyle brand to the U.S., it has put Chinese characters back on the logo. Marty Staff, a former Hugo Boss USA chief executive who is advising Bosideng on its move stateside, sees the Chinese identity as a selling point.

That's a big shift: Bosideng is betting savvy U.S. consumers are ready to accept a Chinese fashion brand as edgy, of-the-moment and well-crafted.

"For many years -- and I think this has changed to a great degree -- China wasn't looked at as a place where designer apparel could emanate from," said Mr. Staff, who also had a top role at Calvin Klein. "We would like to be part of the change."

Chinese companies have had a rough time building brands overseas – according to a 2013 Millward Brown study, 94% of Americans can't even name one. Some of China's consumer electronics brands, like Huawei, Haier and Lenovo, are making inroads, but fashion has so far been a harder sell.

The company says it has a deal with a luxury department store retailer, and clothing will arrive there in August, the same month the U.S. e-commerce site is ready.

In London, the company has experimented to find the right balance of Chinese and global branding. Mr. Staff has urged the company to put Chinese characters on the label in London, too. He also mentioned a London promotion that put discounts inside fortune cookies – something he won't replicate in the U.S.

"It wasn't upscale, it wasn't global, it was just stupid," Mr. Staff said.

Bosideng Chairman Gao Dekang launched the brand in 1976, and now it is listed in Hong Kong and has 10,000 mainland points of sale.

"I always dreamed of having a Bosideng presence in the U.S," Mr. Gao wrote in an email. "I understand the competitive nature of business there and believe our product will stand out to the customer."

Bosideng in the West is very different from the one Chinese consumers know. In China, it's a mid-market seller of down coats and jackets. For the U.S., it's been rebranded as an upscale lifestyle brand for men, and globalized. 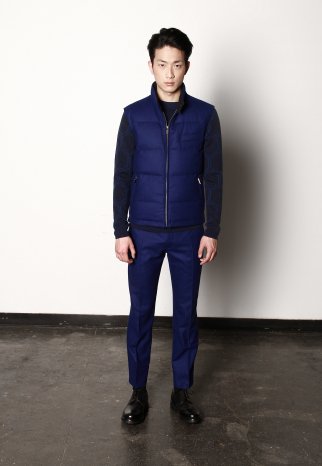 Bosideng says men who wear Hugo Boss and Ted Baker will like its fashion.

About 80% of the collection is made in Europe and 20% in China. The fabrics come from Europe. Design director Amelia Pretious is from London.

"I think (the collection) feels very international, though in terms of the creative inspiration we always look to China," Ms. Pretious said.

Another upscale Chinese brand, Shanghai Tang, shut its shops in New York and Las Vegas and now has only one U.S. location, in Miami, though it says online sales are strong. Shanghai Tang taps into a more traditional idea of Chinese design, with silks, traditional qipao dresses and jade pendants on handbags.

That's not what Bosideng is going for.

"We're always respectful and cognizant of Chinese heritage," Mr. Staff said. But "that doesn't mean you have to have Mandarin collar jackets." Instead, a Chinese contemporary artist, Chang Jinchao, offered illustrations for T-shirt designs.

Bosideng is spending most of its U.S. marketing budget on digital and has a presence on Facebook and Instagram.

"Once we get traction in America I'm hopeful we can eliminate the name Bosideng and simply use Chinese characters," Mr. Staff said. "A little like 'the artist formerly known as Prince.'"