U.K. Election Ad of Conservative Leader Is Glossier Than He Is | Ad Age
Skip to main content

U.K. Election Ad of Conservative Leader Is Glossier Than He Is

LONDON (AdAge.com) -- A heavily airbrushed poster created for the Conservative Party's election campaign has backfired spectacularly and exposed the party's leader and candidate for prime minister, David Cameron, to public ridicule, playing straight into the hands of the rival Labour Party. 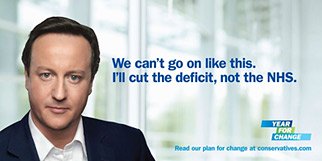 The original, heavily airbrushed ad.
Created by ad agency Euro RSCG, London, the poster shows a picture of Mr. Cameron next to the phrase "I'll cut the deficit, not the NHS" and the campaign's tagline, "Year for Change." (The NHS is the U.K.'s National Health Service.)

The deficit-cutting message may have been uncontroversial, but the picture, which showed the 43-year-old Mr. Cameron with smooth, even skin, a clearly defined jaw and very bright eyes, scored a painful own-goal for the Conservatives.

Within hours, the internet was flooded with spoofs of the poster, including the Labour Party's own version, which asked the question, "Is what you see what you'd get?" and adapted the original tagline to "Airbrushed for change."

Current Prime Minister and Labour leader Gordon Brown even mocked Mr. Cameron with references to the airbrushed poster in the House of Commons, in between discussions on the relief effort in Haiti and a government inquiry into the war in Iraq.

Sacha Deshmukh, CEO of Engine Business, a business communications consultancy, said, "Cameron is one of the youngest leaders and he looks fine as he is. They didn't need to airbrush him. The public is crying out for open, honest dialogue, and airbrushing comes across as a metaphor for something bigger, like spin."

Designer Clifford Singer set up one of the most popular spoof websites, mydavidcameron.com, which includes a "generator" template that can be downloaded to create your own version of the poster. Already the site has had 210,000 visits and 170,000 unique visitors; the online generator has been used 185,000 times, with 500 versions submitted to the site. 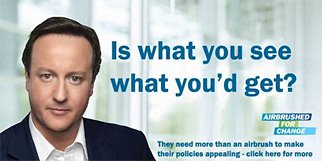 One of the spoof ads.
Mr. Singer said, "What's been even more significant is the amount of chatter that's been going round online discussion forums. Our reach has gone beyond the usual political sites to Mumsnet.com, football supporters' networks, music and clubbing sites, and mainstream entertainment sites like Popbitch."

The Conservative leader's privileged, upper-class background is the subject of many spoofs of the poster. One reads, "Government of the rich, by the rich, for the rich," while another says, "Some of my best friends are poor."

One version, which gives Mr. Cameron an Elvis quiff and white high-collar jacket, reads, "We can't go on like this. With suspicious minds." Another simply but aptly bears the logo for Madame Tussauds waxworks attraction. And one has Mr. Cameron saying, "I love the BBC so much I want to cut it up into little pieces and give it to all my friends."

Mr. Singer said, "It's not just the airbrushing that makes it artificial. It's the pose and the image too. I wanted to make a comment on this kind of 'style over substance' marketing, and look at what's behind the facade."

The Conservative party has been active online with blogs, webcasts and regular tweets, but has made a fundamental mistake by thinking it can separate out the different media channels, Mr. Deshmukh said.

"It's revealed the static thinking behind the Conservative approach to marketing. The nature of communications today means that even traditional marketing tools like billboards will impact on the online community. Digital runs through everything," he said. "A far more sensible tactic would have been to use a perfectly normal picture of David Cameron and link the message in the poster to an online discussion."

Mr. Cameron's response has been to say that he's responsible for the message, not the picture. Despite the poster fiasco, the Conservative party is still tipped to win the general election, likely to be held in early May 2010 although the date hasn't been set. As party leader, Mr. Cameron will become prime minister if the Conservatives win.

The U.K. has a long tradition of election posters that resonate with voters. Margaret Thatcher's 1979 election to her first term as prime minister was helped by a famous poster ad by Saatchi & Saatchi that summed up a nation's discontent with the ruling Labour party and high unemployment with the words "Labour Isn't Working" and a picture of a long, winding line of supposedly unemployed people.