BEIJING (AdAgeChina.com) -- Renren.com, often dubbed China's Facebook, is re-branding itself as a social-networking site for everyone, not just Chinese college students. 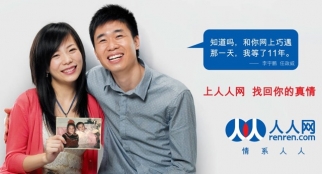 Like Facebook, the site started in college dorms, but under the name Xiaonei.com, Mandarin for "on campus." The site's owner, Beijing-based Oak Pacific Interactive Group, changed the name in August to Renren, which means "everyone."

Unlike Facebook, which opened up its site beyond the educational community but achieved exponential growth without actively marketing it, Oak Pacific hired Saatchi & Saatchi to re-position Renren.com in a campaign that broke this month targeting white-collar workers up to age 35 who surf the web at work but haven't yet joined the social-networking wave that has already swept through Chinese schools.

"We had to go after this demographic, [people] who aren't on social networks in China as much," said Dean Sciole, executive creative director of Saatchi & Saatchi, Beijing.

Renren.com topped 100 million registered users at the end of October, out of China's total internet population of 360 million. Facebook has over 300 million registered users worldwide, but in China it has had to cede to local online entrepreneurs. Foreign sites such as Facebook, Twitter and Flickr are generally blocked in the mainland by China's so-called Great Firewall.

"There are regulations that if you follow, you areOK. Local companies monitor content and pull down content deemed inappropriate. Renren is playing by the rules," Mr. Sciole said.

The new campaign aims to broaden the site's appeal.

"Our goal was to generate large-scale awareness and build up the equity of the new brand within a very short time," said Eelin Ong, planning director at Starcom MediaVest, Beijing, Oak Pacific's media agency.

Using the tagline "Qing Xi Ren Ren" ("Emotional connection between everyone") and a new logo with two intertwined circles, the creative encourages people to use the site to track down old friends, coworkers and love interests. Ads show people who were reunited through Renren, a marketing tactic that inspired hundreds of people to contact Renren with their own stories.

"Many of the stories we've received are not that dissimilar from what we did, so we are looking at those to bring those stories to life now," Mr. Sciole said.

However Oak Pacific and Renren still have hurdles to overcome.

"I think Xiaonei's re-branding shows that it is searching for a viable business model. I am not sure that opening up the users is necessarily the right way to go," said Shaun Rein, managing director of China Market Research Group in Shanghai.

Social media sites need to get better at monetizing eyeballs, he said. That means having a clear brand positioning and package to present to advertisers. Sites can either be enormous or focus on a niche.

"But by being a late player trying to be large, I am not sure that they will either get users or advertisers," he said.

The re-branding effort presents a "big challenge," said Alvin Chiang, Oak Pacific's chief marketing officer in Beijing. "Most importantly, we had a much bigger vision to capture a fast-emerging social networking ecosystem that is revolutionizing the internet industry."

Already a top player in China, Oak Pacific owns another social networking site, Kaixin (currently involved in a legal dispute with the owners of a rival site with a similar name, Kaixin001.com), as well as interactive entertainment portal Mop.com and information technology portal Donews.

To make Renren more relevant, the site is cooperating with other popular sites, including a wiki called Hudong.com, YouTube-like video-sharing site Tudou.com and restaurant reviewer Dianping.com. Renren.com users can log in directly from those sites.

Renren is also partnering with Nokia Corp. to pre-install Renren.com's widget in some of Nokia's 3G mobile phones. The widget can also be downloaded from Nokia's Ovi online app store.