One Down, Two to Go: Coca-Cola Returns to Myanmar After 60 Years | Ad Age
Skip to main content
Sign In Register

One Down, Two to Go: Coca-Cola Returns to Myanmar After 60 Years

Cuba, North Korea Now the Only Countries Where Coke Does Not Do Business
READ THIS NEXT
Dispatches from the panicked GDPR frontline
Burma bottlers in front of Solomons storefront.
Credit:

Coca-Cola has officially re-entered the Myanmar market, with top executive Muhtar Kent overseeing the first delivery of his company's product in more than 60 years.

Also known as Burma, Myanmar was largely shut off from the rest of the world for decades under the rule of a repressive military regime. But a nominally civilian government installed last year has rolled back many authoritarian policies, setting off the first inklings of a foreign investment boom.

Coke is among the very first multinational marketers to re-enter Myanmar, and many are sure to follow it into the country of 55 million. Strategically located between China and India, Myanmar is the poorest country in southeast Asia but rich in natural resources.

"The Coca-Cola Company has been a part of the community fabric in countries around the world for decades," Mr. Kent said in a statement. "In every nation and city where we do business, our employees strive to create economic value and build sustainable communities. We are privileged to once again have the opportunity to play a role in building a better future with the people of Myanmar." 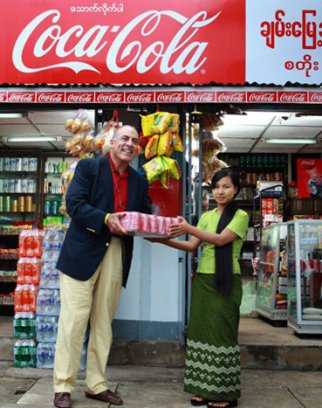 In May, Coca-Cola roster agency Ogilvy became the first international agency to re-establish a presence in Myanmar by acquiring a stake in Today Advertising. Based in Myanmar's largest city of Yangon, Today Ogilvy & Mather works with local marketers as well as helping multinationals explore market potential.

Today Ogilvy & Mather will support Coca-Cola with an outdoor advertising campaign being introduced in Yangon, based on the global theme of "Open Happiness."

Although Coke has not officially been in Myanmar for more than 60 years, its products have been available in the market during that time, brought in via unofficial channels from other southeast Asian countries. Cuba and North Korea are now the only two countries in the world where Coca-Cola does not do business.

Coca-Cola said it is in the process of establishing a bottling entity in Myanmar, working with local soft-drinks company Pinya Manufacturing Co. Local production will start "as soon as possible."