Coca-Cola is turning its beachfront concept store in Rio de Janeiro into a lab for the company's "Happiness Refill" project -- a dispenser that gives young cellphone users data credits to browse the internet rather than a soda. 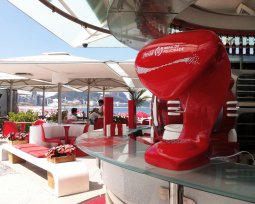 The effort targets Brazil's young, emerging middle-class consumers who love their mobile phones but can't afford a generous data plan. More than 80% of this target group uses a prepaid phone and lacks an affordable data option in a country with few free Wi-Fi hot spots.

Mr. Tartaro explained how the "Happiness Refill," which starts March 22 , will work:

At the Coke store, an open-air kiosk on Copacabana beach with bright red-and-white tables and and a bar, a cellphone user holds his phone up to the bright red dispenser, and data credits and a Coke browser are downloaded. To make it easy, the browser has just three buttons: Coke FM radio to hear music, social networks including Facebook and Twitter, and the weather forecast (because this is beachfront Rio de Janeiro).

Each data "refill" is 20 megabytes, which Coke is calling "20 liters of happiness," and will last about two weeks for a moderate user, and a week for a heavy user, Mr. Tartaro said. They can return for more more refills.

"Our briefing [to Ogilvy] was that I need you guys to think about something that connects Coke, mobile and the middle class consumer," said Adriana Knackfuss, senior consumer-connections manager at Coca-Cola. "Everyone has a mobile phone, but they lack money to buy data credits. It's an opportunity for Coke to deliver happiness in a relevant way."

For the first month, the "Happiness Refill" will only be open to 50 young Rio dwellers selected by their wireless provider Oi.

"They're the beta testers," Mr. Tartaro said. Ogilvy and Coke can monitor how the dispenser and the mobile browser function, make sure people find it easy to use, and see if any tweaks are needed. "After the first month, we'll have a snapshot of how users are interacting with the browser and the dispenser. We need to evaluate the results. Is Coke becoming part of their day-to-day?"

More users will be added after the first month, and later Mr. Tartaro hopes to expand beyond the Android platform and the single wireless provider Oi. The technology for "Happiness Refill" was developed by Ogilvy's office in Recife, a city in northeast Brazil that has become known as a digital center, while Ogilvy's Sao Paulo office added creative input and Rio is overseeing activation.

It was hard to develop the first dispenser but adding more will be cheap. "The beauty of this project is not the technology itself, but how to use it to transform the experience," he said. "Open the hood [of the dispenser] and it's just a Mac computer and a keyboard."

"It's a pilot for us to test consumer reaction, and understand what role Coke should play in the mobile space," Ms. Knackfuss said. "We'll be filming everything. We're interested in capturing consumers' spontaneous reaction."

If the "Happiness Refill" is successful, it could be used elsewhere in Brazil, and in other emerging markets with a fast-growing young population hungry to spend more time online.

"Part of the beauty of this project is it's happening at point-of -sale," Ms. Knackfuss said. "It's a reason for consumers to come back."

Brazil is an innovative market for Coke. In addition to the Rio concept store, the local company sells a line of Coca-Cola apparel throughout the country, and has participated in earlier initiatives under Coke's "Open Happiness" platform, including the "Happiness Truck" that toured Rio last year dispensing not just soft drinks but unexpected items like soccer balls and surf boards.