Digital Innovation Is in the Spotlight at London Fashion Week

London Fashion Week might not have quite the prestige of its European rivals in Paris and Milan, but it does lead the way in digital innovation, with 90% of shows streamed live, according to the British Fashion Council.

British label Burberry was the first brand to live-stream a fashion show in 2010, and is still leading the way in high-tech fashion experiences.

During this week's show, which took place in Kensington Gardens (right next to the royal residence of William and Kate), Burberry became one of the first brands to use Twitter's new "buy" button for in-tweet purchases, U.S. customers were given the opportunity to buy a limited number of the new spring/summer 2015 nail colors as soon as they appeared on the runway.

Burberry also introduced an online "Runway Made to Order" service, which – for two weeks only – allows customers to buy and personalize Burberry's trademark trench coats and bags from next spring's collection.

For the first time, the show was live-streamed on China's WeChat, while Chinese film director and actress Vicki Zhao provided commentary. Burberry also made use of Instagram's new app, Hyperlapse, to publish time-lapse videos during the countdown to the show.

On YouTube, Burberry trialled a new beta function, allowing viewers to watch highlights from the show while moving through layers of content, including stories behind the season's inspiration, the show's soundtrack, the latest make-up look and reactions from the guests as they took their seats. 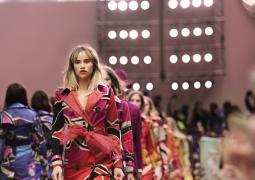 However, digital innovation counts for very little without the right celebrities to set social media alight. British supermodels Cara Delevingne and Kate Moss, who star together in the campaign for Burberry's new personalized perfume MyBurberry, arrived together and sat on the front row, from which they watched Bradley Cooper's model girlfriend, Suki Waterhouse, lead the show's finale.

Another historic British brand, Hunter – famous for its wellington boots – pioneered a fashion partnership with real-time video start-up Grabyo, tweeting different 10-45 second clips from its runway show to followers according to the weather conditions in their location. The label's creative director is Alasdhair Willis, husband of fashion designer Stella McCartney, who helped social media chatter by gracing the front row next to her famous Beatle father Paul McCartney.

U.K. fast fashion retailer Topshop, due to open a flagship store on Fifth Avenue next month, claimed to be the first brand to debut looks from a catwalk collection on social media, allowing customers to view key looks on Facebook before the runway show began. Six pieces from the collection were available to buy online or in-store immediately after the show, as the brand sought to make fashion week more accessible to its younger customer base.

Topshop also introduced what it called the "Social Catwalk," streaming its show onto a digital screen in the window of its Oxford Circus flagship store. Customers who upload pictures of themselves to Instagram using the hashtag #Topshopwindow also get a chance to see themselves on the big screen.