Coke Sent Care Packages to Migrant Workers; Sodas Came With Messages of Encouragement and Thanks
READ THIS NEXT
Dispatches from the panicked GDPR frontline
Advertising Age Player

A few weeks back, drones buzzed up to high-rises under construction in Singapore and dropped off cans of Coke to the migrant workers building the towers. Tucked into the care packages were 2,734 messages from Singaporeans thanking the tradesmen for their hard work.

The idea was to link two communities that don't often come into contact – Singaporean nationals and the migrant workers who travel far from their countries to build the city-state's apartment buildings, offices and schools.

Ogilvy & Mather Singapore and a non-profit, the Singapore Kindness Movement, worked with Coca-Cola on the project, dubbed "Happiness From the Skies."

It's part of Coke's international campaign called "Where Will Happiness Strike Next?", bringing the brand theme of happiness to places that could use some cheer. (Another Singaporean example from the campaign was a vending machine set up for stressed-out college students during exams -- it dispensed Cokes if you hugged it.)

This time, Coke approached Ogilvy and said, "we want to do something with the drone, which is the harbinger of death and destruction -- so how do you take this technology that does evil and turn it into good?" said Eugene Cheong, chief creative officer of Ogilvy & Mather Asia Pacific.

Ogilvy homed in on the idea of using drones to reach migrant workers at building sites. Coming from places including India, China, Bangladesh and Myanmar, guest workers make up about a third of the workforce in Singapore, known for its rapid development and high standard of living. The influx of foreign low-wage workers has brought societal tensions and divisions.

"These guys are a community within a community, they are walled off … and when they work they're usually up there in these high-up places that are difficult to reach," Mr. Cheong said. "We thought an appropriate use of drone technology would be to bring the messages up to them. If you use the drones to just deliver the messages to someone on the street, then it's a bad use of technology." 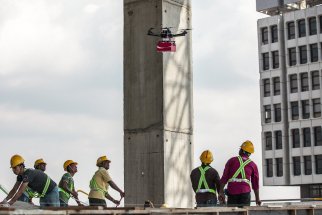 Hundreds of volunteers from the Singapore Kindness Movement asked ordinary Singaporeans to write messages of support to the migrant workers, then snapped photos of them holding the notes.

The photos were tied to Coke cans and delivered to more than 2,500 workers using several drones.

When the crafts landed, people weren't always sure how to react.

"There's that initial kind of trepidation with anything that isn't a part of your everyday routine -- you get skepticism, caution, you even get avoidance, and it always takes one or two really curious brave individuals to take the initiative," said Leonardo O'Grady, ASEAN director of integrated marketing communications for Coca-Cola Singapore. "Then it's like you open the floodgates."

The workers were surprised by the notes -- for some, what meant the most was the sense of being recognized, he said.

Some of Coke's most memorable viral videos in recent years have come from Asia: The brand sent overseas Filipino migrant workers home to their families for Christmas (a real tear-jerker), and it used a cross-border game involving vending machines to connect people in India and Pakistan.

Around the world, Mr. O'Grady said, Coke is "increasingly looking at what cultural role our brands can play, rather than 'what's the communication message our brands can deliver?'"