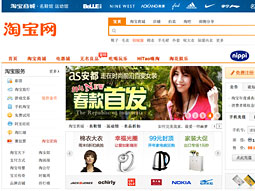 Alibaba's Taobao
At 420 million, China is the world's biggest internet market by number of users . Total e-commerce sales soared 60% year-on-year in the first half of 2010 to $340 billion, according to government figures. On Taobao, China's largest online retail platform, the average number of transactions per user grew by 35% year-on-year, according to data released by Alibaba this week in Beijing.

E-commerce has brought about lifestyle changes and eliminated the boundaries of traditional distribution channels, said Jonathan Luk, Taobao's CEO and president. "Consumers all over China, even in the most remote inland areas, have access to the more than 800 million product listings on Taobao."

Ten days after the announcement in November of Taobao Mall's independent web domain, Taobao Mall set a record for the most daily sales -- $141.17 million -- during a special "Singles Day" promotion. Following its launch, Tmall.com was almost immediately ranked 24th among all of mainland China's websites and number one among all mainland Chinese business-to-consumer websites, according to Alexa Internet, a web metrics company.

In 2010, men made up more of the online shop population (54%) and spent more, but women bought more items. Men tended to purchase pricier goods such as consumer electronics, household appliances and sports shoes, while women opted for clothing, food and accessories. Even within the same product category such as clothing, men spent more, on average, than women.

Zhejiang province showed the biggest year-on-year gain (52%) in gross merchandise value (GMV, or the value of merchandise sold across the platform), followed by Shandong province and Hubei province, which grew by 46% and 37%, respectively. The top 10 areas with the highest GMV in 2010 were, in descending order, the provinces of Guangdong and Zhejiang; Shanghai; Jiangsu province; Beijing; and the provinces of Shandong; Fujian; Sichuan; Liaoning and Hubei.

"There is such a wide variety of products being sold on Taobao, like fish, vegetables and other groceries, it's really becoming the Walmart of China," an Alibaba executive in Hong Kong told Ad Age.

But the real Walmart is moving aggressively into China to compete with Taobao. Last week, the world's largest retailer confirmed an investment in Chinese e-commerce consumer electronics seller 360buy.com to expand Walmart's presence in China.

Walmart is partnering with five other investors to inject $500 million into 360buy, which was founded in 2004 by Beijing Jingdong Century Trading Co. in 2004. 360buy generated revenue around $1.54 billion last year, a 250% increase from 2009. Unlike Taobao, which charges sellers to maintain an online listing, 360buy follows the Amazon.com model by fulfilling orders and earning a share of the transaction revenue.

Walmart opened its first store in China in 1996 and has about 190 now. Third-quarter sales in stores rose 15.2% from a year earlier.