Do You Use an Electronic Business Card Yet? See Who Does | Ad Age
Skip to main content

Do You Use an Electronic Business Card Yet? See Who Does

When people cluster around Isaac Mizrahi at business gatherings these days, it's often because they're intrigued by the cool electronic business card his Hispanic ad agency Alma created a few months ago. 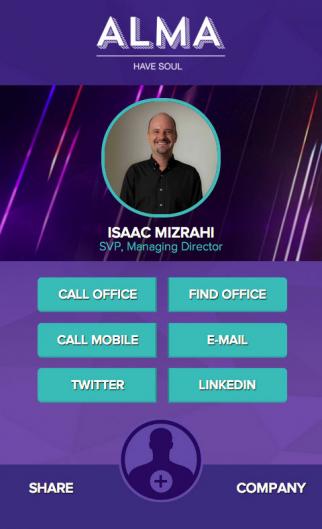 "Our desire was not just to replace but to enhance the idea of a business card," said Mr. Mizrahi, Alma's SVP-managing director. "It's part of our philosophy of merging technology with communication."

Swap a business card with Mr. Mizrahi, and you'll get a link from him via email, mobile phone, text or QR code (your choice). The link takes you to a gorgeous card with Alma's name and "Have Soul" motto at the top (Alma is Spanish for soul). The background is a bright purple, Alma's signature color. Six buttons offer various options to contact Mr. Mizrahi at the office or on his cellphone or by email, go straight to his Twitter or LinkedIn accounts, and find his office on a map. The card can also be shared.

After researching electronic business card providers, Alma opted to avoid a generic card and design their own in order to customize it and show off their agency's logo, colors and style. Alma's creative and production teams figured out the features they wanted and developed the application, then used a website developer, Los Angeles-based Plural, to write the code. (For those who would like to work with a digital business card provider, options include Evaunt, which provides mobile-optimized digital business cards, and QRPro's One Card, which offers a demonstration at http://home.qrpro.co/ )

Mr. Mizrahi said everyone at the agency has a profile and photo, and about 65 people, or two-thirds of the staff, have started using the cards. He said he gives out the card electronically five or six times a week, including to someone he just met on an airplane coming back from a business meeting in Chicago.

Most people opt to receive his electronic business card by email or text.

"We're trying to figure out the new etiquette," Mr. Mizrahi said. "If we know each other, I'd say to give me your phone number or email. For a person I don't know, I say 'We're getting away from [paper] business cards. I can share the card in different ways, do you have a preference? And it's more environmentally friendly.' You have to be respectful that some people might not want to give out their mobile phone number, but they'll give you their email."

So far, no one has given Mr. Mizrahi an electronic business card in return (except his colleagues at Alma).

Only three members of the management team, including Mr. Mizrahi, are allowed to keep paper cards, too. The others haven't been confiscated, but everyone was encouraged to turn in their stacks of cards for recycling.

Eventually Alma expects to save money by not having to keep printing business cards as staffers join, new photos are taken, the agency logo is tweaked, and so on. Besides being a cool idea, the investment in going digital will pay off in three or four years, and after that the agency will be saving money, he said. Alma also owns the IP from developing the application, and could sell it to others. (Known for its innovative ideas, Alma was named Ad Age's Multicultural Agency of the Year in January 2014).

And for a new-business getter like Mr. Mizrahi, offering someone an electronic business card for the first time is a good opening gambit.

"It's a great ice breaker, and segues into a conversation about what we believe," he said.

Best of all, it replaces his previous ice breaker: "I'm not the fashion designer Isaac Mizrahi."