Evian's "Live Young" campaign -- until now associated with dancing babies -- will target adults next week and challenge them to discover their inner child at outsize playgrounds. The reward: playing on the adult-size swings and see-saw will make it snow, a rarity in London. 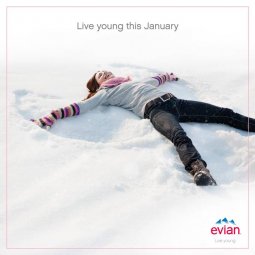 The French mineral-water brand, owned by Danone, is helping Londoners shake off the post-holiday gloom by installing giant play equipment in the heart of the city.

Two playgrounds will feature a see-saw and swings, specially designed for grown-ups to play on. As an added incentive to join in, the equipment is linked to a snow-making machine, so the more you play, the more snowflakes flutter down.

Laura Pope, a brand manager at Evian, said in a statement, "Evian's giant playground installations are the perfect way to help stressed workers get in touch with their 'Live Young' spirit by letting go and having fun."

Havas Worldwide, London, devised the playgrounds and is in charge of setting them up. Eloise Smith, a creative director at Havas, said, "We're creating the most unusual playground London has ever seen, combining the purity and youthful spirit of Evian to create a world first in kinetically powered snowfalls."

For those who can't make it to the playground, We Are Social has created a Facebook "Live Young" hub, which will share a different tip on how to "Live Young" every day in January.

There is also a competition to win a Northern Lights igloo experience in Lapland, as well as specially commissioned video content and a "slingshot" function, which lets visitors add Evian products straight to their shopping baskets with their preferred online retailer.

The Live Young swings will be at Canary Wharf in East London for three days, Jan. 7-9, and the see-saw will be at Finsbury Square in central London for two days, Jan. 10 and 11. The installations will be promoted with an outdoor teaser campaign in subway and train stations, including digital escalator posters, cross track projections and big screens at 20 London Underground stations and 14 mainline railroad stations. Media is by WPP Group's MEC.

Separately, adult playgrounds are featured in a new JWT trend-spotting report called "100 things to watch in 2013." Some cities are installing adult playgrounds, JWT says, to combat obesity and inactivity. However, those playgrounds have workout equipment rather than outsize children's swings. "New York City opened its first adult playground in 2012 and plans to create two dozen more," JWT says.