At Fiat in Brazil, Vehicle Design Is No Longer By Fiat | Ad Age
Skip to main content
Sign In Register

At Fiat in Brazil, Vehicle Design Is No Longer By Fiat

NEW YORK (AdAge.com) -- Fiat is building a consumer-generated car in Brazil, using input gathered through social media to inform everything from the automobile's design to its marketing communications. 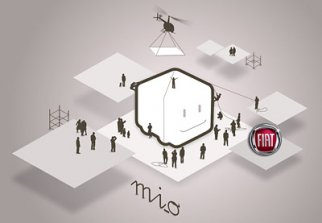 They are all answering the key question posed on the site: "In the future we're building, what should a car have that makes it mine, while still working for others?"

In the two weeks starting Aug. 3, the site had 67,000 unique visitors who submitted 1,700 ideas, and more than 40,000 comments were posted on Twitter. So far, up to 20% of traffic to the Portuguese-language site is coming from outside Brazil. An English-language version was added Aug. 21, with Spanish to follow next month. Posts, mostly in Portuguese, can be translated into English, Spanish, French and Italian with a click.

Users submit ideas for the car-design project -- recent posts and tweets pitch bamboo car-seat covers, biometric car-owner identification and outlets to charge laptops -- which are studied by Fiat staff. Later, users will be asked for branding and marketing ideas. The concept car will be displayed at Brazil's 2010 auto show.

Brazil was chosen as the home for Fiat Mio because it's a digitally sophisticated and innovative market, and Fiat's largest after the company's native Italy. Fiat is Brazil's No. 1 carmaker, with a 24.8% market share, and the country's fifth-largest advertiser, spending about $80 million a year.

The project also reflects the natural optimism and enthusiasm of Brazilians, buoyed by a car market that will grow by 5% this year to close to three million vehicles.

The site is organized much like a social-networking site, with users' pictures and comments, and a Twitter feed along one side. Ideas are divided by categories such as design, materials, safety and infotainment, and also sorted by most recent, most votes received, and most discussed.

In September, Fiat will post further guidance about the car and its positioning, based on the ideas submitted, so the next round of suggestions can be more technical. Fiat's engineers will then consolidate the technical design, which will be published in open-source software in early 2010 for everyone to see, Mr. Reis said. In March 2010, the discussion will turn toward developing a branding and marketing campaign before the October car show. At that stage other Fiat agencies, such as Leo Burnett, will get involved, said Joao Ciaco, Fiat's marketing director in Brazil.

After that, it's not clear whether a commercial launch is ahead for the Fiat Mio.

"It may not be a commercial car, but it might be a map for the future," Mr. Reis said. "It's a map for the desires of consumers."

Even if the concept car is never built as a mass-market vehicle, the features being suggested now may find their way into Fiat vehicles.

"We can bring the features to other cars," Mr. Ciaco said. "There are small things that don't cost much and bring great satisfaction to consumers, but haven't been given much attention. A lot of their ideas will end up going into our cars."

Mr. Ciaco said that only three of the more than 1,700 ideas received so far were too off-base to post, indicating people are taking the project seriously. Most ideas are about design, materials, sustainability and infotainment, he said. In addition to appealing to consumers to participate through print ads, portals, Facebook and Fiat's data base, Fiat is reaching out to universities to get input from their engineering and communications schools.

"This was born in the heart of the industry," Mr. Ciaco said. "The whole company is involved. It has the potential for thinking about communications in a new way and doing branding differently."