"Buy This!" is a Finnish sitcom set in an advertising agency, but it's more than just "Mad Men" with laughs. The show works with real brands -- including Nissan, global retailer Lidl, and telecom brand Sonera -- for which the make-believe agency creates ads. These ads then run as part of genuine campaigns outside of the show, mixing fact with fiction.

The unusual concept became reality thanks to a collaboration between TBWA Helsinki and FremantleMedia, producer of "American Idol," "Family Feud" and "America's Got Talent." Marketers provided the briefs, Fremantle wrote the 30-minute TV shows, and TBWA Helsinki created the ad campaigns.

Each of the 10 shows features a different brand, only three of which are TBWA Helsinki clients. "It's much easier to get meetings when you are talking to marketers about a TV show they can be part of," said Theodor Arhio, a creative director and head of digital at the agency. "It's a great new-business tool and I hope it will be good for the TBWA network." The team had only five weeks last November to get marketers on board; over that time the shop signed up 10 of the top 15 advertisers in Finland.

The marketers promote the show through their own social-media channels, which has helped "Buy This!" to perform above average in its Sunday primetime slot, right after "Dancing With the Stars." The program is broadcast on the country's biggest commercial channel, MTV3 (the "M" stands for "mainos," which means "ad" in Finnish).

Mr. Arhio is currently at entertainment content market MIPCOM in Cannes, working on turning "Buy This!" into a global phenomenon. Already the format has been sold to Sweden, Norway, Denmark, Australia and New Zealand, while the team is also in talks with the U.S., the U.K. and Germany. TBWA Helsinki part-owns the format, and the plan is to work with local TBWA agencies in every country where the show is broadcast.

Juha-Matti Raunio, VP head of TBWA Helsinki's innovation unit, Pilot, said, "Clients come on board with the attitude that they want to make something happen. The format allows you to let loose and gives you the courage to experiment more and create a new kind of campaign. We've tested new ideas like looking at what would happen if you sell a brand to women instead of men." 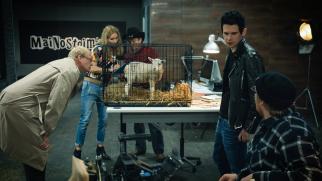 Mr. Arhio added, "People ask us if we worry about making the ad industry look stupid. In a way we make it look dumb, but the audience understands it's a sitcom with fictional characters and strange commercials." The agency in the show is called Mainostoimisto Huutomerkki, which means "advertising agency exclamation mark," and the ads created are all up on its real-life website.

TBWA Helsinki filmed all 10 ads across one huge production in the space of one month this summer. They set up what Mr. Arhio describes as an "advertising factory" in Lithuania, taking just a couple of days out to film on location in Turkey and Finland. "It took us another month to recuperate," Mr. Arhio laughed.

Since June, when filming finished, the agency has had time to spend on editing, making the most out of the content created, and working up social, digital and print versions of the campaigns. "We are creative people. We keep on working until someone says stop," said Mr. Arhio.

"Buy This!" features guest stars in every episode, including David Hasselhoff, who is in both the Nissan episode (which has yet to air) and the subsequent Nissan commercial. Other guests include reality TV stars -- brought in mostly for their social-media followings – such as Hanoi Rocks frontman Michael Monroe. The show has even featured a member of parliament famous for his glasses in an episode sponsored by eye-care brand Instrumentarium. 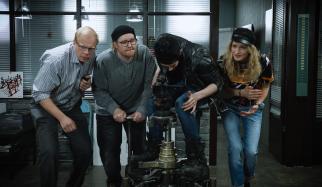 "It's a win-win," Mr. Raunio said. "The broadcaster gets a good show; the brand gets good content; and Fremantle has a new, fun format."

"Although it seemed a bit scary at first to put our brand into the hands of screenwriters, the advertising agency and the TV channel, there was something telling me that this could become a good thing," said Rasmus Bange, senior brand manager at confectionery marketer Fazer and a former TBWA exec, of the show. "The best thing is that it combines entertainment and marketing communications into one interesting package."