Gap Is Accused of Sexist Email Campaign in U.K.

A Girl Is Labeled a 'Social Butterfly' While a Boy Is a 'Little Scholar'
READ THIS NEXT
Dispatches from the panicked GDPR frontline
Credit: Gap

Gap has come under fire in the U.K. for a sexist marketing campaign that labels a little girl a "social butterfly" and a small boy a "little scholar."

The email campaign to promote "first big day" at school styles for toddlers was spotted by Let Toys Be Toys, an online group that lobbies the U.K. toy and publishing industries not to limit children's interests by gender.

@LetToysBeToys tweeted, "For anyone who thinks that sexist marketing to children isn't a problem ... Really @UKGap?" Popular British children's author Malorie Blackman responded on Twitter, "What the actual hell?" 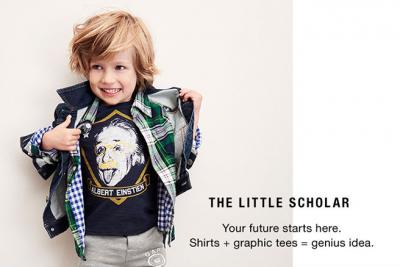 To add insult to injury, the little boy doesn't look much of a scholar when you see that the t-shirt he is wearing spells the name of German physicist Albert Einstein wrong. It reads "Einstien."

Gap spokesperson Liz Nunan said via email, "Gap brand has always stood for individuality, optimism and creativity. Our intentions have always been to celebrate every child, and we did not intend to offend anyone."

Other toddler stereotypes in the campaign are less offensive, although a second boy is portrayed as "The Comedian" while a girl, although labeled "The Adventurer," is encouraged to layer dresses over her jeans. The images were not used for email marketing in the U.S., but do appear on the retailer's U.S. website.

Gap attempted in April to embrace a more diverse worldview with the launch of the GapKids x Ellen DeGeneres collection, but the move backfired when an ad for the clothing range was deemed racially insensitive. It featured a photo of four young models, with an older white girl seen propping her arm up on the head of the only black model.

Gap apologized and replaced the image with a different shot from the campaign.

In May, Gap reported net sales down 6% to $3.44 billion for its flagship brand and CEO Art Peck admitted that the company had "not had strong marketing in the first quarter of the year." Gap's sales in June were down just 1% compared with the same period a year earlier – less than the 2.7% decline analysts had predicted.