Why Global Marketers Such as Levi's, GM Are Developing Specifically for Needs and Wants of Chinese Consumers
READ THIS NEXT
Dispatches from the panicked GDPR frontline
Denizen is Levi's first brand to debut outside the U.S.
Credit:

In China, which overtook Japan in 2010 as the world's second-largest economy, U.S. and other multinational marketers are going a step further by creating new brands specifically for the needs and desires of Chinese consumers.

Levi Strauss & Co. launched a more affordable brand, Denizen, for China last fall, and General Motors Corp. and other automakers are designing entry-level cars such as GM's Baojun, going on sale later this year. The trend is also moving upscale, with Hermes' new Shang Xia lifestyle brand. And PepsiCo is tapping the Chinese taste for green tea with Spritea, sold only in mainland China.

It's not an entirely new idea, of course. Motorola developed its Ming line of smartphones specifically for Chinese consumers in 2006, and Volkswagen created the Santana for China back in 1981. A big hit, the car eventually made its way to Japan, Brazil and Mexico. And American fast-food chains such as McDonald's and KFC have tweaked menus in China for years to please local palates with items such as congee (Chinese-style rice porridge) and you tiao (dough fritters). 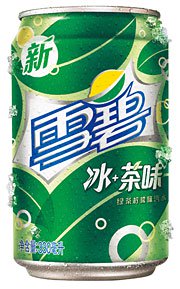 Spritea combines favorites Sprite and green tea.
But the trend is accelerating -- and moving into less familiar territory such as luxury brands. Hermes launched a ready-to-wear clothing and lifestyle brand in Shanghai last fall called Shang Xia, which means "Up Down" in Mandarin. Hermes already sells its handbags, scarves and leather goods at stores in 14 cities across China, which will become the world's largest buyer of luxury goods by 2015, according to PriceWaterhouseCoopers. It aims to open 50 more stores in the mainland in the next five years, including standalone Shang Xia stores, whose products are inspired by Chinese culture.

"Economic growth and changing exchange rates mean that more Chinese can afford goods made by multinationals," he said. "Multinationals' traditional markets are suffering the effects of tightened consumer credit and falling consumption. Finally, more companies understand enough about China's consumers to succeed at making products and services for China."

General Motors gave car buyers their first look at Baojun, which means "treasured horse," in late November. The entry-level brand, created by GM with two Chinese partners, SAIC and Wuling, is expected to cost around $7,000 -- far less than cars sold under the GM name such as Chevrolet, Buick and Cadillac. When it goes on sale later this year, Baojun will be marketed to rural consumers who can't afford a Western nameplate car.

Nissan Motor is also developing an inexpensive car brand for China called the Venucia, or Qi Chen ("Morning Star") in Chinese through its joint venture with Dongfeng Motor Group, to go on sale in 2012. Honda began the trend two years ago by launching the compact sedan Li Nian brand with its local partner, Guangzhou Auto.

Levi Strauss & Co., meanwhile, launched Denizen in China in August 2010, the American jeans company's first brand to debut outside the U.S. Created for teens and young adults in emerging markets who cannot afford Levi's-branded jeans, Denizen will eventually be sold worldwide, primarily in developing countries in Latin America and Africa, though it was largely created by and for Asia.

"We've realized a new consumer has emerged, status-seekers in rapidly emerging middle classes. This is primarily a developing-market phenomenon; they exist outside the U.S. in markets like China, India, Indonesia, Mexico and Brazil," Aaron Boey, Levi's Singapore-based president, Asia/Pacific, said when the brand launched.

The name combines the first three letters of "denim" with "zen," a word with Japanese and Chinese roots that means "meditative state" or an "escape from the hustle and bustle of everyday life," Mr. Boey said. Ads are by Wieden & Kennedy, Shanghai.

While China is leading the trend, marketers are aware that they need to cater to local tastes in other emerging markets, such as Brazilians' penchant for guarana, an Amazon fruit that spawned a whole soft-drink category that is almost as popular as colas in Brazil. Coca-Cola has its own guarana brand, called Kuat (pronounced Kwatch). It's successful enough that leading local brand Guarana Antarctica recently did a TV spot that showed a Kuat can with the voice-over: 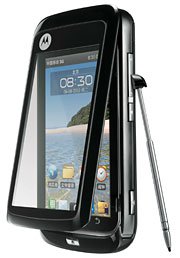 Motorolla Ming smartphone was created for China in 2006.
"The gringos at Coca-Cola made this and they think it's guarana."

In China, PepsiCo and Coca-Cola are both expanding their portfolio of Chinese-designed and developed products. Pepsi now sells Tropicana Guo Bin Fen juices, Cao Ben Le drinks inspired by traditional Chinese medicine, and Lay's potato chips in flavors such as cool cucumber and crispy prawn. One of Coca-Cola Co.'s latest concoctions in China is Spritea, a tea-flavored carbonated drink only sold in mainland China. The beverage taps into the combined popularity of green tea and Sprite, the mainland's No. 1 soft drink.

Creating brands for China is not, Mr. Wolf warned, for newcomers. "The success stories come from companies who have a decade or more of experience in China and who have taken their lessons to heart. It may be counter-intuitive, but the best way to earn that experience is to test and modify your current offerings in the crucible of the market."