LONDON (AdAge.com) -- Groupon has promised to raise its game after having three online ads banned for misleading consumers in the U.K.

The group discounter said it will tighten up on staff training and quality control safeguards in light of the rulings, which came from the Advertising Standards Authority, an industry-established group that's recognized by the government.

Groupon has been growing at a dizzying pace, expanding from one country to 35 last year. Last month it rejected a $6 billion acquisition bid from Google. But Groupon's continued growth relies partly on consumer trust, which is one reason it told the standards authority that it had no commercial interest in misleading its customers.

One of the challenged Groupon promotions claimed to offer a banquet for $15, but failed to make clear that one person had to pay for a full price meal in order for the second diner to get the discount. Another offered 60% off a safari but did not point out that customers had to pay an extra $15 on weekends. The third offered a three-course meal for $45 instead of $120 -- even though the three most expensive courses did not add up to $120.

The standards authority investigated and upheld complaints from the public that Groupon was misleading customers, rejecting the group discounter's detailed defenses of all three complaints. 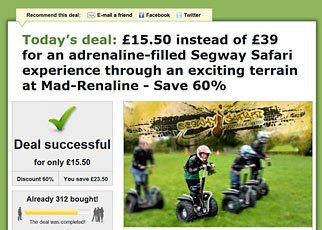 A misleading Groupon UK ad for a safari didn't point out that customers had to pay an extra $15 on weekends.
Groupon claimed that the banqueting claim came about as a result of an error by its editing team, whose skill has been touted as one of Groupon's major assets. Groupon said in its defense that it had hired hundreds of new employees in recent months to meet the demands of its exponential growth and that the offer in question had been written up by a new employee. Groupon offered to reimburse customers who requested a refund.

The safari error was explained as a miscommunication between the account management and customer service teams.

And in answer to the three-course meal complaint, Groupon said that its pricing had been correct at the time the offer was calculated, and sent evidence to prove it. The Advertising Standards Authority, however, ruled that the 65% savings claim might not always be achieved and that Groupon should have made it clear that the savings calculation was based on choosing the most expensive menu options.