Arnold is Now a 'Star Performer' With Double-Digit Growth
READ THIS NEXT
Dispatches from the panicked GDPR frontline
Yannick Bollore
Credit:

Havas Life, Havas Wordwide Chicago, Arnold and Havas Media -- which won Safelite and Sleepy's in the first quarter -- were the main contributors to North American growth.

Speaking on a conference call with analysts, Yannick Bolloré, chairman and CEO of Havas, said, "Our performance has been particularly strong in the U.S. and Asia Pacific. North America strongly accelerated – all our businesses there are doing well, but Arnold is the strongest shift, from declining to star performer with double-digit growth."

Mr. Bolloré added, "Quarter two is booming in the U.S., where we still see clients hyper-investing and confident about the strength of the economy."

Mr. Bolloré said, "We are seeing the best [European] growth in the U.K. and we are investing a lot in this country, with new European headquarters, and we've hired a rock star from a competitor. This country is key to us but there is still big room for improvement." Chris Hirst, former CEO of Grey London, will join Havas as CEO of Havas Creative Group for U.K. and Europe in September.

Organic growth in Latin America was 5.4%, with revenue up 11.3% to $35 million. Mr. Bolloré continued, "The macro-economic situation is strained, particularly in Mexico and Brazil, but some strong new business has allowed us to post this robust performance."

Mr. Bolloré predicted that Havas would outperform expected market growth of 3.5% this year, although he admitted, "It's early in the year and we don't know which cards our competitors are holding – we don't want to over-promise but we remain cautiously optimistic."

François Laroze, financial director of Havas, said on the call with analysts, "We start all our pitches with digital, but classic media are still quite strong. The paradox is that we spend more time discussing digital media and spend more money on traditional media." 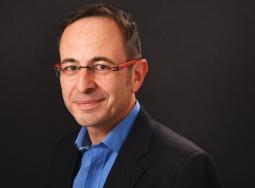 Havas Media Group today announced the formation of a separate Greater China cluster, and recruited Christophe Cases, formerly managing director of Accenture in Greater China, to be its CEO.

French rival Publicis Groupe reported organic growth of 0.9% in the first quarter. Omnicom Group's organic growth was up 5.1%, WPP was up 5.2% and Interpublic Group of Cos.was up 5.7%.