Creative Is Best Known for Fiat Live Store, a Hit With Car Buyers

Isobar is taking the unusual step of creating a chief creative officer role for the Americas—for the digital agency network's top creative in Brazil, Fred Saldanha. 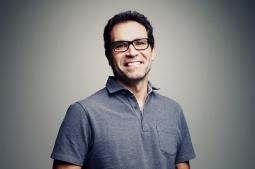 Mr. Saldanha captured the Dentsu Aegis-owned network's attention with work like Fiat Live Store, an immersive online auto store that lets car shoppers take a personalized virtual tour with a car expert that isn't a salesman. After experiencing the Fiat Live Store, which won an Innovation Lion at the Cannes Lions festival last year, almost 70% of visitors signed up for a test drive at a dealership, he said.

"My role is to help foster innovative ideas on a broader scale," Mr. Saldanha said. "The challenge is to humanize the technology."

He noted that Brazilians are noted for their digital creativity while technology is well-developed in the U.S., and that combination "is the future."

Mr. Saldanha, a native of Portugal, came to the digital world late, joining Isobar from Ogilvy Brazil just five years ago. Isobar has about 350 staffers in Brazil, and is the country's biggest digital agency. In his new territory, Isobar only has offices in the U.S. and Brazil, but will be opening elsewhere in Latin America, including Argentina and Mexico, he said.

In his new role, Mr. Saldanha will spend 10 days a month in New York, where he's looking for an apartment, and 20 days in Sao Paulo. He spent last week in Chicago and this week in New York, meeting colleagues and reviewing work.

At the same time, because he really likes to do more than one thing, he's co-founder of a startup that will launch in a couple months, involving a curated fashion app.

What's next? Isobar in Brazil is working with Fiat, the biggest car maker in Brazil, to jointly develop a product called Fiat Safe Key. It's a car key that a driver blows into after an evening of partying, to determine if he is sober enough to drive. If not, the key connects to an app that automatically calls a taxi (and Fiat may pick up 10% of the fare). A soft launch is expected at the end of the year, after manufacturing is arranged and technical issues resolved, such as how to extend the device's battery life to a year by activating it only when someone is blowing into the key.

"That's what drives me today, to use technology in a human way, and the brand is telling you something," Mr. Saldanha said. "If brands want to be part of peoples' lives, they need to do more than just advertise. [They have to address] what are you doing for me?"