Japan's All Nippon Airways has come under fire for an ad that some found off-putting and even racist: It depicted a Japanese actor dressed up as a foreigner, wearing a big rubber nose and blond wig.

The blunder might be a lesson for Japanese companies and agencies preparing for the international spotlight of the 2020 Tokyo Olympics -- especially since the ANA ad was created by Japan's increasingly international Dentsu, and because it isn't the only commercial to caricature foreigners that way.

ANA's ad drew more press than most, with Time's news website referring to it as "whiteface" in a headline. The airline quickly apologized, said it meant no offense and revamped the ad.

Foreign bloggers living in Japan have pointed out many similar ads, including a 2013 spot for a Toshiba ricemaker/breadmaker that featured an actress in a plastic nose and that later disappeared from the company's website.

Brian Ashcraft, an Osaka-based writer who covers Japanese pop culture, flagged that ad on Kotaku.com, a news site for gamers, along with a spot from rental car company Budget showing an Elvis impersonator wearing a pompadour and yet another prosthetic nose.

"Typically, in Japanese popular culture, whether that's 19th century art or modern-day manga, foreigners are portrayed with large noses. This isn't always true, and, of course, there are more nuanced portrayals," he wrote in an email. 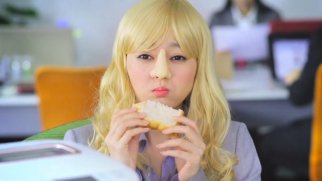 Another prosthetic nose, from Toshiba

"If the gag is just a rubber nose, then that seems rather tired, no?" Mr. Ashcraft wrote, noting other commercials in Japan that depict people of different backgrounds in clever, non-offensive ways.

The ANA commercial was apparently trying to depict the airline as more international. It showed two Japanese airline pilots speaking English together to chat about new routes to foreign countries.

"Let's change the image of Japanese people," one said. "Sure," said the other, and the camera panned to him suddenly wearing a wig and a pointy prosthetic nose. Reactions online were mixed – some didn't understand the fuss, and others said the ad was insensitive and asked people to imagine if it had poked fun of the appearance of non-whites instead.

An airline spokeswoman said in an email Monday that the ad was not meant to offend, and that a new version had already been broadcast to get across "the message we wanted to convey in a more effective way. That is to highlight the increased number of international flights that ANA is offering from Haneda Airport." She said the commercial came from Tokyo-based Dentsu. The agency did not immediately respond to a request for comment.

Michiko Morales, VP for public relations for the Virginia-based Gabriel Marketing Group, said the airline surely "had no clue it would offend certain people."

"Japan is so homogenous, and people idealize blond hair and big noses," said Ms. Morales, who was raised in Japan and recently lived there again for three years.

But with 2.5 million foreigners living in Japan and the Tokyo Olympics coming up, Ms. Morales said, Japanese companies need to remember "it's not just Japanese people living in Japan who are watching."

The ad featured a well-known actor and comedian, and it clearly was thought-out for months, she said. She believes the ad team probably neglected to run it by a few foreigners to see how it would play.

"They really just needed to ask someone," she said.