At Ad Age 's Shanghai conference, speakers from Volkswagen, Starbucks, Unilever, Lee Jeans, Yves Rocher, Tiffany & Co., Philips as well as Chinese brands Herborist and TCL shared their strategies for growth in China outside the biggest cities. (Keep in mind this is a country, where a tier two city may have 7 million people or more.) For the Sept. 5 conference, Market to Watch: Building Brands Beyond Tier One in China, Ad Age partnered with Thoughtful China to attract a crowd of 350 people. Below are some of the top takeaways:

Never mind the editor; China has censors. When Tom Doctoroff's publisher submitted his latest book to Chinese authorities, they rejected it. "It's a very friendly book, but I talk a lot about people and their relationship with government and society," said JWT's CEO for North Asia. His last book was published in Chinese but "there'll never be a Chinese edition" of "China Code" and it can't be sold anywhere in China, he said.

China's internet population is deeply engaged with social media. Internet giant Tencent and OMD used an Intel campaign to illustrate how marketers can take advantage of this sticky space. Social media marketing can be especially effective in tiers where consumers are self-described "Weibo addicts," said Sophia Ong, who oversees digital marketing solutions for Tencent's advertising department. The Intel campaign followed 10 people traveling home for the Chinese New Year, armed with only $22 , the kindness of strangers and an Intel laptop to post on the popular Tencent Weibo microblog platform. The campaign was widely covered in the media at a time when news events had many in China questioning whether the country had lost a capacity for compassion. A related documentary, "A World Without Strangers," has been viewed 6 million times, Ms. Ong said.

Just because you can afford a pink metallic Ferrari doesn't mean you should buy one and drive it around Shanghai. "Ferrari shouldn't allow it," said Gilles Beroud, general manager Asia at Yves Rocher, as conference attendees--many of whom had seen the colorful luxury car zooming around the city--nodded in agreement. "For quick money today, you might be damaging a reputation that took 150 years to build."

Get over your snobbish, French-influenced vision of luxury. Few Westerners think of Chinese baijiu as a luxury drink: It's a grain-based alcohol usually downed in quick shots, leaving the mouth and belly afire. But Hurun Report's Rupert Hoogewerf puts Moutai baijiu on his list of top luxury brands in China. A bottle of 30-year-old Moutai costs 10,000 RMB ($1,576), he said. "People always ask, Is there going to be a Chinese luxury brand? Most people seem to only answer with a French view of the world, which is that luxury is only fashion and watches and bags." But Chinese furniture, tea and medicine could become luxury players, he said.

Those in pursuit of the next YouTube star marketers might want to brush up on their Korean. "Gangnam Style," by rapper Park Jaesang (known as Psy), has roared onto the YouTube scene since being uploaded in July. The outrageous video featuring a kooky, equestrian-inspired dance has garnered 110 million views, ranks No. 1 on Billboard's Social 50 chart and has its own Wikipedia page. Split Works' managing director, Archie Hamilton, used the song to make the point that music is universal and can be a powerful marketing tool in any culture. Marketers with their eye on Psy will want to move fast. Billboard reports that he signed on with Schoolboy Records, run by Justin Bieber's manager Scooter Braun and is looking to break into the mainstream U.S. market. 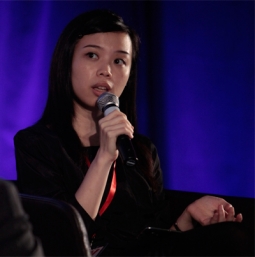 WeChat is the hottest internet app for marketing in China. Panelists discussing digital trends said the year-old app's huge user base -- 100 million plus and growing quickly -- and ability for brands to have targeted one-on-one conversations with consumers make it something to watch. Similar to WhatsApp, Tencent's WeChat lets users send text, voice, photo and video messages. "Apps like WeChat ... can do a lot of geo targeting closely tied to your physical store. [With promotions] you can target the people around your store," said Angela Au-Yeung, national digital marketing manager, China for Lee Jeans, part of VF Corp.

Mobile marketing amounts to a tiny sliver of ad budgets but its potential impact could be huge in China, where there are 1 billion mobile phones. During a panel discussion on digital marketing, Unilever's VP of digital marketing and e-commerce for North Asia said plainly that marketers aren't doing more with mobile because they don't know how to use it. "Unilever has been trying hard to push and invite more of our business partners to talk to our people ... to help us understand better how to use this powerful tool to engage with our consumers," Dorcas Lau said. Alvin Wang Graylin, CEO of mobile advertising firm mInfo Information Technology, agreed, saying marketers don't understand it's possible to make media-rich custom apps with video and audio features. Plus , marketers need to start thinking about using mobile as an interaction model for traditional media in a fully integrated campaign.