The promotion, showing this week on the Shanghai website of the travel agency Spring Tour, isn't slick or high-profile. But it's noteworthy because there are few portrayals of gays and lesbians in ads in China, though tolerance is increasing.

"There have been very few brands that have reached out in China, and the first that do are going to gain a lot of, not just kudos, but also loyalty from this community," said Steven Paul Bielinski, who founded Shanghai LGBT Professionals to foster dialogue and cooperation with businesses on issues related to the gay, lesbian, bisexual and transgender community. "And that's going to translate to a lot of business for these brands."

Amid signs some marketers are ready to target the community, Shanghai LGBT Professionals organized China's apparent first conference on the "pink market" this month, with about 120 people attending the free event.

Brands haven't usually had much data about gay men and lesbians in China. So Shanghai LGBT Professionals worked with 20 partners, including local gay websites and groups, to arrange for a survey of the gay and lesbian community by San Francisco-based Community Marketing & Insights. Some 8,500 people answered questionnaires, Mr. Bielinski said.

The survey touched on purchasing habits, mobile use and even how "out" respondents are. Only 3% of gay and bisexual men and 5% of lesbians and bisexual women identified themselves as "completely out," the survey found, and relatively few have told their bosses, colleagues and family members.

In another finding, however, respondents said that companies' support for LGBT causes, legal protection and progressive employment policies was their No. 1 influencer on purchasing decisions.

To compare the survey results to mainstream Chinese society, the LGBT network had British research firm YouGov ask the same questions of the general population, matching some demographics of the original survey (which skewed young and male.) Of 2,500 people surveyed, 7% said they were gay or bisexual, Shanghai LGBT Professionals said.

One of the conference's partners was gay website Danlan and its location-based gay flirting app, Blued, which has 8 million users. Geng Le, the police officer-turned-tech entrepreneur who founded Danlan, has worked with some skincare and clothing brands, including the Andrew Christian underwear line. Going forward, he said he sees tourism as a market with special potential, as Chinese LGBT travelers "want to go where people are friendly and open-minded to them, for example, Amsterdam, San Francisco, Taiwan and Thailand."

The Langham luxury hotel in Shanghai has donated conference space and rooms for some speakers at events hosted by Shanghai LGBT Professionals.

"Our company policy is inclusion, and to get that message to the marketplace is important to us," said John O'Shea, general manager of The Langham Xintiandi in Shanghai. He also sees the community as "a huge market going forward." 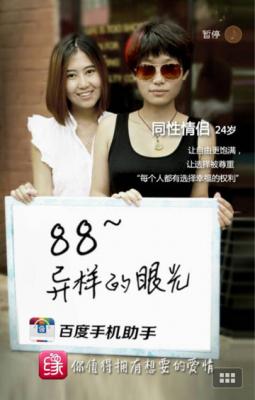 An ad for a Baidu app featured many different people, including a lesbian couple.

Baidu, the Chinese search engine giant, recently released an ad showing people from all walks of life, including a young lesbian couple who appeared with a caption reading, "Everybody has the right to choose their happiness."

A Baidu spokesman confirmed the company had issued the ad but declined to elaborate on it.

Baidu has lately been a topic of discussion in the gay community: A Chinese man sued a clinic that gave him electroshocks as part of therapy to try to convert him to heterosexuality, and he sued Baidu too because he found the ad for the center there.

China decriminalized homosexuality in 1997 and stopped classifying it as a mental disorder in 2001. It's still a tough place to be gay, since young people face intense pressure from their families to marry and have a child. Pressure to produce an heir is especially great because of the one-child policy -- a young gay person usually doesn't have a brother or sister to carry on the family line.

Challenges for brands
The community's discretion might slow some marketers. Darren Burns, president of Weber Shandwick China and a panelist at the conference, said some attendees were adamant "that if you're not out, it's hard to quantify you as a market or a voice."

On the other hand, "this is an opportunity to reach 40 or 50 million people, and that's bigger than most countries," Mr. Burns said.

For marketers, the issue probably isn't too sensitive, he said. LGBT pride events have been covered by China's state-run newspapers, as Mr. Burns noted. And China, unlike the U.S., doesn't have a conservative movement that might object to LGBT ads.

Mr. Bielinski, an American who has lived in China almost 10 years, has rebuttals for marketers worried about blowback. There are only a few main LGBT mobile platforms, making consumers relatively straightforward to target, and it would be "relatively discreet to do so." Attitudes are changing quickly in any event, he said.

Marketers could even put a rainbow flag in an ad, he said, and mainstream Chinese consumers wouldn't know what it was -- but the LGBT community would.